Senator John McCain: Secretary Panetta mentioned in Iraq. In all due respect, Iraq is unraveling. It's unraveling because we didn't keep a residual force there because the President of the United States pledged to get out of Iraq [clears throat] and we could have kept a residual force there and kept some stability. Instead, it's unraveling and Iran's influence is increasing. And there's every possibility you could see a very chaotic situation --

Bob Schieffer: You think there's a civil war coming there?

Senator John McCain: I think there's clearly an unraveling going on which could eventually lead basically into three different kind of states in Iraq. We needed to keep a residual force there and that is what the Bush administration envisioned and that is what we should have done. We never gave them a number until, in the words of General Dempsey, the numbers cascaded down to 3,500. The Iraqis were ready to deal on this issue. The administration did not give them a number. And so what the perception is now, particularly in that part of the world, is that the United States is weak and withdrawing. And that is also having its effect in other places including emboldening Iran. Leading from behind is not what this world needs. And we still do have the best military in the world. And we still do have the most efficient and we still do have the most effective ways --

Bob Schieffer: Well let me just ask you, you heard Secretary Panetta said he's confident that there's an Iraqi army in place that could protect those 15 to 17,000 Americans that are still there. Are you confident that those people are safe?

Senator John McCain: Of course not.

Bob Schieffer: And what would happen? We have to go back?

Senator John McCain: No, I think we would have to withdraw them. Look, what Secretary Panetta may not understand -- and I have great admiration and respect for him -- that the situation is unraveling. The Vice President of Iraq is now hiding out in Erbil. There is militias and death squads operating. There is a breakdown in the Iraqi government. And there will be increased tensions on the border between the Kurdish areas of Iraq and the other areas of Iraq. And all of these could have been avoided if we had led rather than followed.


There's a number of things that McCain's talking about that people aren't going to be able to follow because the media really didn't cover it (it's all in archives as the year wound down). We may go into that during the week -- especially if some people, reading or watching the words -- decide to do columns or posts where they attack McCain without understanding what he's saying. Dempsey is Gen Martin Dempsey who is the Chair of the Joint-Chiefs, by the way.

First, we'll note our disagreement. McCain insists that US forces on the ground would mean the current political crisis wouldn't be taking place. I think you can make that argument if you're willing to say that the same number of US forces in Iraq in July would be on the ground right now.

You can say that because when that number was on the ground, Nouri wasn't pulling this nonsense. So you can say that based on what took place in July, it wouldn't be taking place right now. But McCain (in 2011) favored some reduction. So whether the numbers dropped down to 20,000 or 15,000 or 12,000, I don't see how you can make the claim that the crisis wouldn't be taking place. (I attended numerous Congressional hearings on Iraq in 2011. I never heard McCain support a number as high as 46,000. The highest I ever heard was 20,000. If there's a time in 2011 when he supported a higher number, please let me know.)

Repeating, you can use July as a standard. There were approximately 46,000 US troops in Iraq then. So although you can say if 46,000 remained it is likely that what is happening currently (political crisis) would not be, I don't see how you can argue, 'If 20,000 US troops had stayed, this wouldn't be happening.' You can make the claim, you can argue it and you may be right but it's not like you can prove it or even prove that it's likely.

That brings it back to the White House. (A) It was the White House that spat on the Iraqi Constitution and the will of the voters by insisting Nouri remain prime minister even though the people expressed their will that Iraqiya be given first crack at forming a government. (Ayad Allawi's Iraqiya came in first in the March election, Nouri's State of Law came in second.) Since Nouri's causing the political crisis currently, I think you can make a strong argument that it wouldn't be taking place, had Ayad Allawi become prime minister. (B) It was the White House that propped up Nouri, yes, it's also the White House which failed to convey to Nouri any respect for rule of law. How else to explain that the political crisis starts after Nouri flies home to Baghdad from DC where he spent days with Barack Obama? (Another explanation would be that Barack parroted April Oliver from decades ago and conveyed to Nouri that the US really didn't care what he did to Iraqiya.)

So there's the stay/go issue. We're going to political, domestic political. Iraq is a nightmare right now. People who follow world events are aware of that. It may be a small number in America, but they are aware of it. And since there's not many US outlets with people stationed in Iraq, the coverage is kind of vague and blurry.

So a segment of the public sees a vague blurry political crisis and they hear Leon Panetta (and others in the administration) dismiss it as anything serious while seeing McCain speak passionately about it. Who are they going to identify with?

In that vacuum, it's going to be McCain.

Those of us opposed to a US military intervention in Darfur in the last decade had to tread very carefully. And we knew it. We couldn't be dismissive (which is what the White House now is -- especially in press briefings -- both at the White House and at the State Dept). If we were dismissive, the other side (the pro-war crowd) won. We looked uncaring and they cared. It didn't matter what the arguments were on either side, it mattered if one side looked uncaring. Because most Americans want to believe that their country cares.

The White House is not conveying that they care about Iraq at all. John McCain is. By default, he's winning.

Last Sunday, the number of US military people killed in the Iraq War since the start of the illegal war was 4486. Tonight? PDF format warning, DoD lists the the number of Americans killed serving in Iraq at 4486. Here's the screen snap. 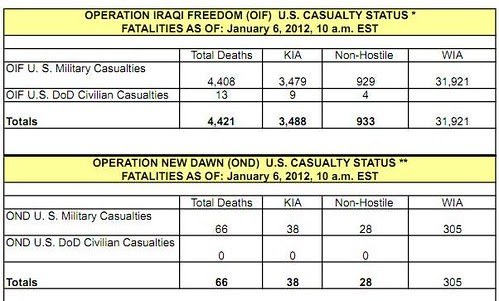 
Isaiah's The World Today Just Nuts "Here's Lucy" went up earlier tonight. I'll change the time stamp on it so that it's at the top after this goes up. New content at Third:

After nine years of war and occupation US troops have pulled out of Iraq.

The US still wants to shape the future of Iraq with its lucrative oil resources. It has built the biggest embassy in the world in Baghdad with thousands of staff and private security contractors.

Iraqis rightly cheered the US exit. Yet they are left with a legacy of poverty, instability—and the sectarian tensions stoked by attempts to divide the resistance.

But Iraq is not a victory for the West. The war was opposed across the world. Two million marched through London on the magnificent Stop the War Coalition demonstration in February 2003.

George Bush and Tony Blair will forever be associated with this bloody imperialist war and the lies about weapons of mass destruction that led to it.

They claimed they wanted to free Iraqis from a dictator. But imperialist war does not bring freedom whether in Iraq, Afghanistan or Libya.