Jane Arraf: These days at Baghdad's Liberation Square, there are more soldiers and police than protesters. Not just these but dozens of riot police waiting just under the grid. But they won't have any trouble from these demonstrators. With the killings and arrests of anti-government protesters, these young men chanting support for Nouri al-Maliki have taken over the square. A few won't give up.

Iraqi female protester: I can talk freely, right? This is Tahrir Square. And it's about freedom.

Jane Arraf: But it's not. These men drown her out when she starts criticizing Maliki. They won't give their names. Here at Radio al Mahaba, an independent women's radio station, the staff used to see all their friends at the Friday protests. That's until Hadi al-Mahdi, a controversial radio host, was arrested and badly beaten and then killed at home. And before the first set in the station's cafeteria last fall.

Kamal Jabar (showing the remains of the bombing): This was an in door.

Jane Arraf: One of the founders of the station who was beaten up after a protest last year says they've had enough.

Kamal Jabar: And we got the message. We are moving out of here. I don't feel secure. I don't want to be responsible for any death or injury or harm to any of the staff.

Jane Arraf: There were high hopes for the democracy meant to take root in Iraq after Saddam Hussein was toppled. But in between the fall of Saddam and an increasingly authoritarian government, the freedom to say what you want has been shrinking. Hundreds of activists have either left the country or gone underground. While some of the radio staff have quit, Ahlam al-Daraji wants to continue her show at a new, safer location.

Ahlam al-Daraji: Life is meaningless if you remain afraid and worried all the time. And if I say, "I can't say this because someone might object"? If that's the case, why are we living? Maybe I should leave Iraq?

Jane Arraf: They're staying for now. With fewer voices left, they believe they need to speak up for the rest. Jane Arraf, Al Jazeera, Baghdad.


As we noted at Third this morning, "Today the Associated Press quotes Human Rights Watch's Sarah Leah Whitson stating, 'Iraq is quickly slipping back into authoritarianism. Despite U.S. government assurances that it helped create a stable democracy (in Iraq), the reality is that it left behind a budding police state'." The opening of the section on Iraq in HRW's [PDF format warning] World Report: 2012 notes:

Human rights conditions in Iraq remained extremely poor, especially for journalists, detainees, and opposition activists. In part inspired by peaceful uprisings elsewhere in the region, thousands of Iraqi demonstrated in the streets to demand better services and an end to corruption. Security forces and gangs responded with violence and threats.
Reports continued of torture of detainees unlawfully held outside the custody of the Justice Ministry. In late June or early July United State forces handed over the last of the 192 detainees in Iraq who were still under US control at the end of 2010, including some former members of Saddam Hussein's government. Attacks by armed groups killed hundreds of civilians as well as the police. The US continued to withdraw troops as part of a 2008 agreement that calls for complete US withdrawal by the end of 2011.


2010 mattered so much to Iraq. But our 'brave' panhandle media (Pacifica Radio, The Nation, etc.) either ignored Iraq or brought on trash like Nir Rosen to offer 'expertise.' Trash that opnely disrespects women, they're not really interested in humanity or equality. They're interested in their own thuggish behavior and in supporting other thugs.

Which is how the 'analysts' paying attention wanted you to know that Nouri al-Maliki was the answer.

There's a mistaken opinon by some visitors that I "love" Ayad Allawi or that I think he's "heroic" or some thing else. The only Iraqi politicians I've had any dealings with is a member of Moqtada al-Sadr's bloc. I'm fully aware of Allawi's histroy and, check the archives, we've covered it here.

But unlike Nir Rosen, I never approached Iraq as something to quickly cross of a things-to-do list. Unlike Nir and his peers, I didn't praise Nouri because he was "authoriatarian" and would scare the Iraqi people into submission. Nouri is trash. (Like his American supporters.)

But I don't live in Iraq. I don't vote in Iraqi elections. If Nouri had been the choice of the Iraqi people, then so be it. But he wasn't.

Nouri and his thugs insisted that Iraqiya was "Ba'athist" and "terrorist" and would destroy Iraq. And, look at the only real in depth report on the elections (written by Deborah Amos), Nouri had the bulk of the media on his side.

State of Law, his political slate, was supposedly going to destroy all the other choices. But that didn't happen.

Some little Nirs and friends of Nir like to hiss like alley cats that Iraqiya only won 2 more seats in the Parliament.

First, that's two districsts full of people voting, that's not "Iraqiya only got two more votes from the Iraqi people than State of Law!" It's also true that Florence Griffith-Joyner won the Gold for the 100 meter in the 1988 Summer Olympics. Yeah, she only beat Evelyn Ashford by 0.3 seconds, but she still won. No one tried to argue, "Evelyn shold get the gold because she almost won!" Flo-Jo was the winner because she came in first. Didn't matter by how much.

And Iraqiya won the 2010 elections. That's how it goes.

But the White House ignored that to insist upon their fellow Nouri al-Maliki -- of whom Roy Gutman (McClatchy Newspapers) notes today, "Prime Minister Nouri al Maliki, a Shiite Muslim, is driving to consolidate control and sideline more secular politicians in a battle that increasingly appears to be a fight to the finish in which there can be no compromise."

Now back in 2006, I had a heated argument with a friend at the State Dept over Nouri. The 2005 Parliament was stating that they wanted Ibrahim al-Jaafari as prime minister. The US imposed Nouri on the Iraqi MPs. And shouldn't have been able to. But, I was told by my friend, "al-Jaffari was prime minister and if he continued as prime minister, that might send the wrong message." Yet the same basic State Dept (only the appointees change, most are career government employees) wasn't at all concerned in 2010 about a message being sent by keeping Nouri -- even when Nouri lost the race.

The Constitution was clear about who should have first choice at trying to pull together a coalition which should then trigger the President (of Iraq) to name a prime minister-designate. But just as Nouri would use the Superme Court he controls to aid him in power grabs in 2011, he did so in 2010 with the Court offering a 'unique' interpretation.

And he shouldn't be. He's in violation of the Constitution, of the will of the Iraqi people and of the democratic process itself.

The White House backed him and really damaged any hopes of democracy in the process. If risking your own safety to go to the polls and vote doesn't result in any change -- even when the results put Nouri in second place, not first, if the Constitution is tossed aside to keep the second place choice in office, if everything is violated to make him prime minister-designate and he still can't name a full Cabinet in 30 days as required by the Constitution but he gets to be prime minister, then what the hell does any of it matter?

A message was sent by the White House when it elected to back Nouri -- after warnings from human rights group and, reportedly, warnings from the CIA.

If everything that was going on in Iraq right now was going on under Prime Minister Ayad Allawi, the US could say, "Well, that's who the Iraqis picked when they went to the polls." But everything's going on right now -- the political crisis, the increase in violence -- with Nouri al-Maliki as prime minister and he's only prime minister because he was the White House's choice, the Iraqi people chose someone else.

Last Sunday, the number of US military people killed in the Iraq War since the start of the illegal war was 4487. Tonight? PDF format warning, DoD lists the the number of Americans killed serving in Iraq at 4487. Here's the screen snap. 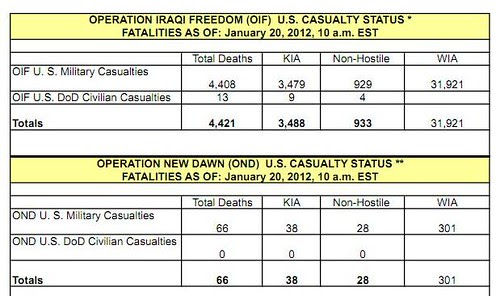 Violence continued in Iraq today. Reuters notes an attack on a Baquba checkpoint which left 2 police officers dead and 2 suspects killed as well as 1 Sahwa injured and, dropping back to Saturday, an attack on an Iskandariya checkpoint left 1 police officer dead and two more injured. Mohammed Tawfeeq (CNN) adds that the Sahwa injured in the Baquba attack died and reports a Mosul car bombing which claimed the life of 1 person and left three more ("including two police officers") injured.


Isaiah's latest goes up after this. Pru notes this from Great Britain's Socialist Worker:

The British intelligence services are bogged down in accusations of torture and collusion.

Two Scotland Yard inquiries concluded last week. One looked into the treatment of Binyam Mohamed by MI5. The other looked at MI6-led interrogations at Bagram prison in Afghanistan in 2002.

In both cases the Crown Prosecution Service claimed there was not enough evidence to press charges.

Binyam Mohamed is a British citizen. He was detained in Pakistan and interrogated by an MI5 operative. The CIA reported that he was “continuously deprived of sleep”, shackled and threatened.

In a court case in 2010, documents exposed that the security services were aware of Binyam’s torture—and supplied 70 questions to his interrogators.

A parallel investigation looked into the actions of MI6 interrogators at US-run Bagram prison.

Detectives did not take a statement from Shaker Aamer, who is thought to have witnessed the incident under investigation.

And US intelligence officers present refused to give statements.

On Thursday of last week Scotland Yard launched an investigation into the torture and rendition of two Libyan rebels in 2008. MI6, with the knowledge of Tony Blair, launched the operation in conjunction with Gaddafi’s security services.

But this is a cynical move. One of those accusing the government of torture, Abdul Hakim Belhaj, is a key rebel leader in Libya. The British government has once again switched sides.