Yesterday, McGurk's e-mails to reporter Gina Chon from 2008 were leaked.  In 2008, Chon was covering Iraq for the Wall St. Journal.  McGurk was part of the US diplomatic staff in Iraq.  While the private sector paid for Chon's expenses, the US tax payer paid for McGurk and did so with the belief that he'd be focusing on Iraq.  Instead, Chon was one of many hook ups he attempted while in Iraq.  The US taxpayer footed the bill for his sex-texts explaining that he had "blue balls" and how he'd gotten rid of them and who had the best wine in Iraq and how much he missed Chon and how Ryan Crocker, US Ambassador to Iraq, couldn't find out about them.

That last one is the really interesting piece.

He now wants Ryan Crocker's old job.   He who lied and concealed a relationship which should have been disclosed.  US diplomatic staff is not supposed to be on a bootie call when they're sent to a war zone.  They are certainly not supposed to engage in hidden relationships with the press.

As I noted yesterday, what Gina Chon did is Gina Chon's business.  She is a private citizen. She was not working for the government.  We have not quoted her comments back to him nor do I intend to.  They have no bearing on the nomination.  But what he did does have bearing.

How focused was he on his job, how much were the observation skills he was being paid for distracted by his constant need for hook ups.  Chon is only one of the hook ups.  There were others.  With the Chon one now out in the open with the exposure of the e-mails, Brett McGurk should explain why he should now be trusted to represent America in a foreign country after his immature and juvenile behavior less than four years ago?  What's changed?  How has he matured?

What he makes him the person to oversea the State Dept's largest embassy project -- both in size, scope and money -- in the world?

America needs a consistent face in Iraq and the Barack Obama administration has failed to provide one.  Brett McGurk is Barack's third nominee for this post.

Replacing one ambassador in four years might be understandable.  Two?

The White House and the Senate are not properly vetting.

If they were, Brett McGurk -- anyone -- would not be Barack's third nomination for US Ambassador to Iraq.

Barack was never under pressure on that spot.  Ryan Crocker was appointed by Bush and Crocker graciously offered to stay in the post until the incoming president could find a suitable nominee.  Barack graciously thanked Crocker for that offer and took him up on it.

So that first nominee should have been something.

Should have been something good -- instead it was, as Isaiah noted, "The Pig Pen Ambassador." 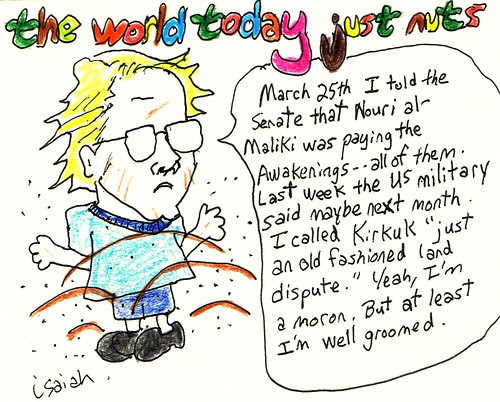 For those who have forgotten or missed it, Chris Hill attended the hearing with his hair sticking up and out and a visible large stain on the front of his shirt.  Neither that nor his obvious ignorance in response to one question or another stopped the nomination.

It's time for the Senate to do its job.  The Foreign Relations Committee probably won't.  They'll probably take a pass.  But there are hard questions that McGurk needs to be asked.

The following community sites -- plus Diane Rehm, Adam Kokesh, CSPAN, On The Edge and Chocolate City -- updated last night and this morning: