In Iraq, the protests continue.  All Iraq News notes that UNAMI has sent Marwan al-Ali to Samarra to speak with the Salah ad-Din Province protesters and their representatives.  The outlet reports that Iraqiya MP Mohammad Iqbal states he expects the current crisis to expand if the protesters' demands are ignored.

Meanwhile Balkans Business News reports, "Iraq claimed on February 25 that Turkey has pledged not to agree to any extensions of oil and gas pipelines out of Kurdistan without the central government's approval. The claim suggests Ankara could be backing off from its aggressive stance on sourcing energy in the semi-autonomous Iraqi region."  That's a claim made by the Baghdad-based central government.  Previous claims by them on this topic have not panned out.   This has been especially true with regards to ExxonMobil which has been attempting to move its exploration to the semi-autonomous Kurdistan Regional Government in northern Iraq.  World Bulletin notes, "Kurdistan Regional Government had announced that Exxon mobil had began its exploring for oil in Kurdistan Region, stressing that the constitution allow the Region to sign contracts with Oil exploration companies, reported PUKmedia." All Iraq News adds that ExxonMobil is said to have started the first phase of drilling yesterday.   In other news about oli and gas and the KRG, Reuters reports, "Russia's fifth-largest crude producer Gazprom Neft has signed a deal to enter an oil project in Iraq's autonomous region of Kurdistan, Interfax reported on Tuesday, despite tension between local authorities and central government. "


The ExxonMobil and Gazprom Neft items aren't good news for Nouri.  Oh well, maybe he can drum up support by noting that the $4.1 billion arms deal with Russia might be back on?  Certainly all the charges of corruption with regards to that deal (and with regards to his son specifically) will mean it will get attention.  Of course, it won't capture good attention but, after almost seven lousy years as prime minister, Nouri al-Maliki knows bad press.

(So well that he was whining over the weekend about how some satellite channels -- horror -- mock him!  They make fun of him!  Oh, the horror!  Oh, the torture!)

Torture?  Did someone say John Bolton's in the house? 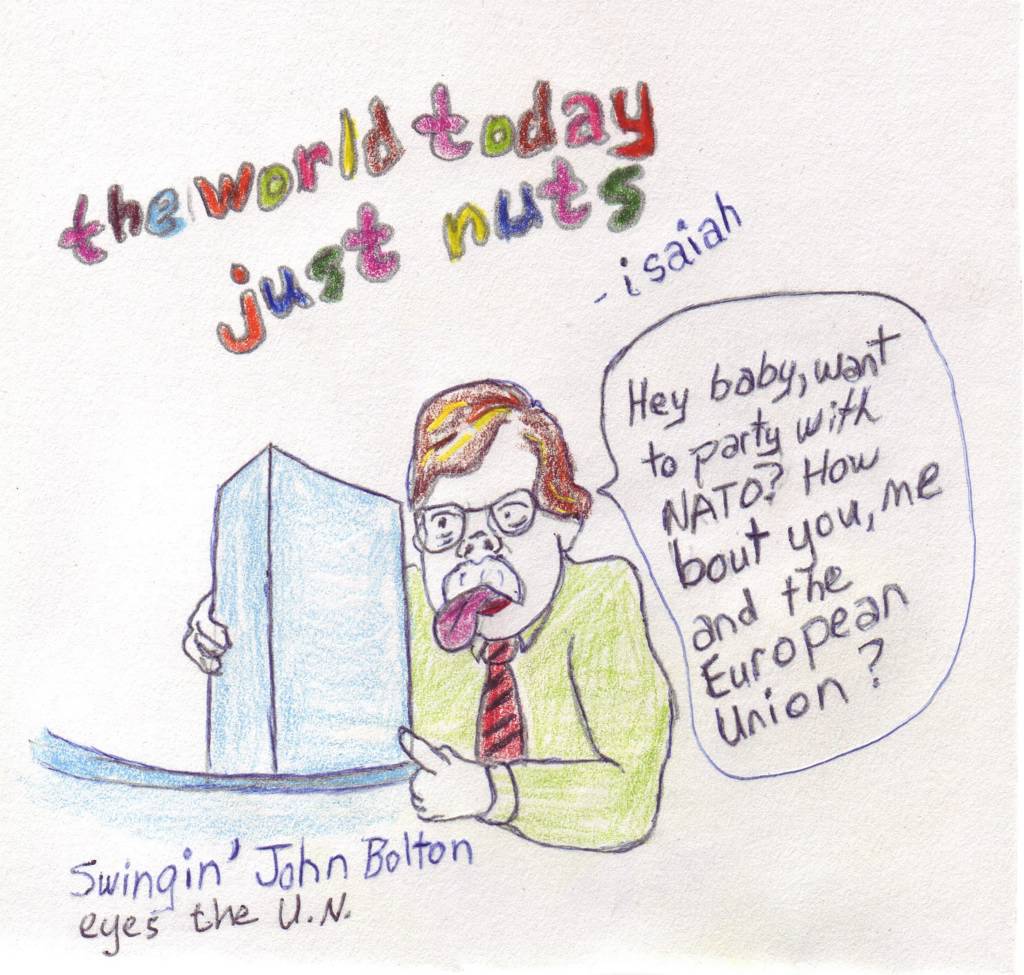 The above is Isaiah's The World Today Just Nuts "Swingin' John Bolton eyes the U.N." from May 12, 2005. Bolton was a War Hawk and Cheerleader of the Iraq War.  Today the Guardian offers "Overthrowing Saddam Hussein was the right move for the US and its allies" and we'll note some of it in the snapshot today.  I haven't agreed with Bolton on anything to do with Iraq (nor am I a sexual swinger so we're in disagreement there as well).  Judging by the title of his piece, I won't agree with this one either.

Alsumaria reports that the Iraqi military headquarters in Falluja was targeted with three rockets today at noon local time.  The National Iraqi News Agency quotes an Anbar police source who states the explosions were loud and that its not known if anyone was injured or killed.  In addition, All Iraq News reports that a Baghdad home invasion left 1 teacher and his son dead.  NINA quotes a Baghdad police source stating that the unknown assailants wore Iraqi military uniforms and forced the teacher and his son out of their home and shot them in the yard.  Alsumaria notes that a 31-year-old male was stabbed to death in Wasit Province (police suspect his older brother). NINA adds that 1 Iraqi soldier was shot dead in Mosul.  As the month winds down, Iraq Body Count counts 304 violent deaths in Iraq this month through yesterday.