The distortions help the war continue

Don't be fooled into thinking the fall of the ISIS caliphate means the end of ISIS. Severe repression of Sunnis in Syria could easily give rise to a new ISIS in another form. Remember what happened to Al Qaeda in Iraq (a precursor of ISIS). https://trib.al/TglhsyE 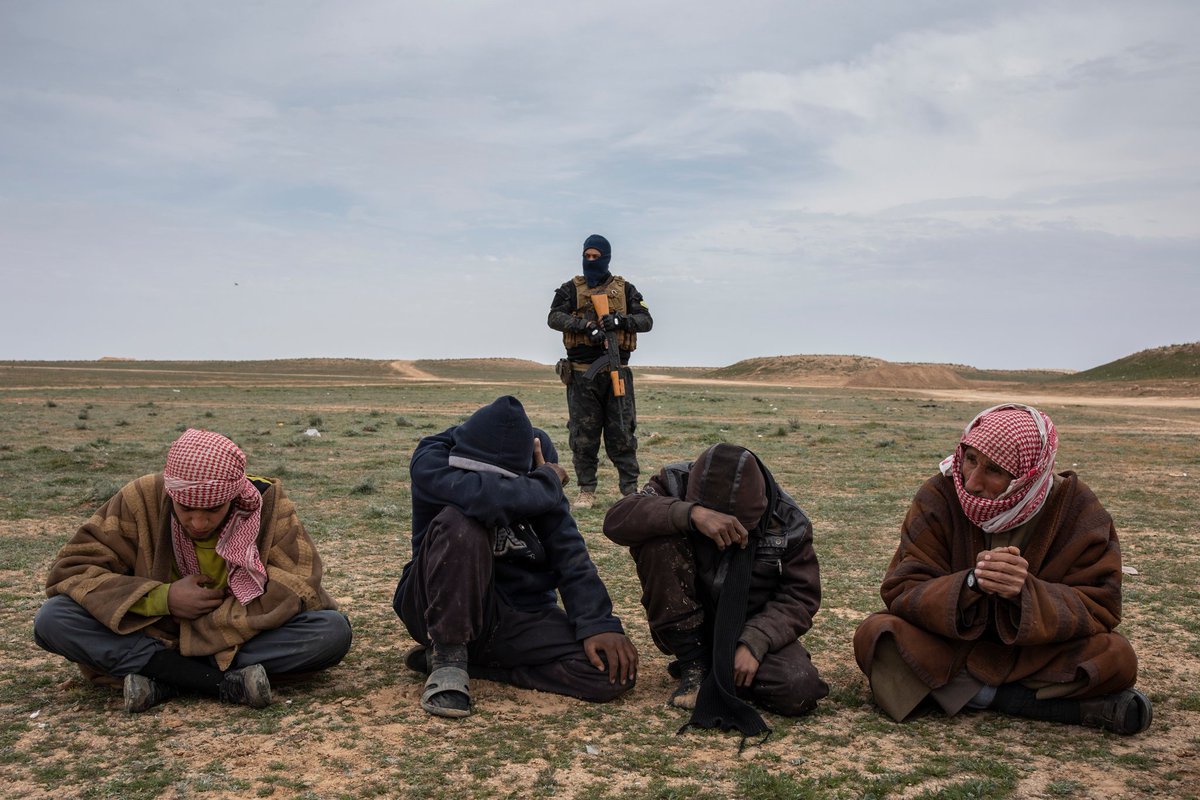 
Kenneth Roth is correct.  And it is obvious to those who paid attention.  Why not to everyone?

Because reality had to be put on hold by the Cult of St. Barack that needed to blame Bully Boy Bush.  They couldn't have their prized toddler blamed for anything so they created some convoluted, retroactive myth about ISIS.

ISIS rose in Iraq because of Nouri al-Maliki's second term.  The voters had tried to prevent a second term by voting.  But Barack overturned that vote with The Erbil Agreement.  Then they appealed to their politicians who tried to do a no-confidence vote but Joe Biden pressured Jalal Talabani to prevent that vote from taking place.  The Iraqi people had tried to stop Nouri by voting and were overruled.  They had tried to stop him via their politicians and that didn't work.

So they took to the streets in protests only to have Nouri and his forces attack them.

All options had been explored.

That's when ISIS rises in Iraq.  That's why so many Sunnis either looked the other way or just washed their hands of it.  Nouri was attacking them.  If ISIS was attacking him?  That was his fight.

That's the rise of ISIS.

Until people can get honest about that, they won't be prepared for what comes next.  And, yes, something will likely come next.  The lives of the Iraqi people have not improved.

To be clear, Bully Boy Bush is responsible for a great deal of the bad in Iraq to this day but Barack's hands were never clean.  That's on him and his Cult needs to stop lying.  Their lies have ensured that the Iraqi people continue to suffer to this day.

When you sacrifice reality for hagiography, more than just the truth suffers, the whole world does.

You could argue that we've seen that over the last two years as the Russia hysteria -- always a hoax, now revealed to be one -- consumed everything.

The so-called 'resistance' wasn't going to be working on ending wars, grasp that.  Idiots like Alysaa Milano embrace wars because they're cheap whores, yes, but also because they uneducated and uninformed.  Alyssa has no education behind her.  She got where she is today -- no where important -- by showing her tits.  That's all people like her know.

So it's not like she would have protested the Iraq War.  But she could have focused on Medicare For All or some other issue that even a soft cranium like her own can grasp.

They wasted two years of our time and they can't even apologize now.  They pimped every lie and conspiracy they could.  The really stupid like Alyssa are just guilty of stupidity.  The den of thieves in the press, the trash involved in POD CRAPS ON WORLD, those former Barack liars, they are guilty of conspiracy -- and I mean criminal conspiracy, as it on the books.  And they should be prosecuted for their actions, this was a criminal conspiracy to overturn a democratic election and to take down a White House.

Bill Clinton was targeted when he was president.  We've called that out here repeatedly.  I'm sorry but because it's my political enemy this go round doesn't make it alright.  It was wrong when it was done to Bill and it's wrong when it's done to anyone -- yes, that does include Donald Trump.

Shame on so many.  And let's move beyond Alyssa for a moment.

Rashida Jones, you are a f**king nightmare.  You want to act like we should listen to you?  Why, dear, why?  Because you are so pathetic that you will date the man who mocked Hillary Clinton in 2008 by mauling a cut out of her for photos?  I don't know how hungry your vagina is, Rashida, but I know your mind is starving.  And to then go after your father publicly for daring to tell the truth -- Richard Pryor slept with men, just like he slept with women?  What world are you living in, you pathetic child?

You're not smart enough to be political.

But the only thing dumber would be anyone pathetic enough to follow you.

Do yourself a damn favor and close your mouth and sit your tired ass down.  Just like Chaz Bono, you don't know enough to speak.  Chaz took it upon hisself, when he was a woman, to be the voice of lesbians -- no one appointed to that role and he embarrassed himself and hurt lesbian rights repeatedly (including his attacks on Ellen's TV show).  He should have shut his damn mouth.

You're in the same territory, dear.  You're a so-so actress who can be brilliant in tiny glimmers  but boring most of the time.  You've done nothing to achieve the fame your mother (Peggy Lipton) had or the fame your father (Quincy Jones) continues to have.

We are kind to you in the industry because we like both of your parents.

But, reality, dear, you're not smart enough on any topic to speak.  And, sadly, that does include race since every four years or so you're defining yourself as a different racial category.  You're 43 years old, race should have stopped being a question decades ago.


And stop claiming you're a feminist.

A feminist doesn't let the guy below stick his dick in her. Shame on you, Rashida, for dating that pig.

Shame on you.  And don't you dare think you can just walk over to feminism because it's 'trendy' at the moment and be embraced.  You've got a lot to answer for and you thank your lucky stars that I'm leaving it at the above when we both know I could go into a lot more detail.

I am required, however, to point out that your attack on your father was an embrace of homophobia and you need to take a hard look at that.  All your father did was tell the truth about Richard sleeping with a man.  Your panic and your panicked response to his statements go to how you have internalized homophobia.  Sit your ass down and examine that.


The stupid and the crooked have distracted the country long enough.  It's time for them to sit their tired asses down.

What the New York Times Will Not Tell You About Military Spending
By David Swanson
http://davidswanson.org/what-the-new-york-times-will-not-tell-you-about-military-spending/
I sent the New York Times this letter on March 20, 2019:
To the Editor,
Peter Navarro’s op-ed “Why America Needs a Stronger Defense Industry” argues that “Investing in the sector means more jobs at home and improved security abroad.” He praises the construction of tanks used in wars in Iraq.
Here is a study demonstrating that military spending produces fewer jobs than other types of public spending, or even than not taxing money from working people in the first place:
“The U.S. Employment Effects of Military and Domestic Spending Priorities: 2011 Update,” Political Economy Research Institute, https://www.peri.umass.edu/publication/item/449-the-u-s-employment-effects-of-military-and-domestic-spending-priorities-2011-update
So, the more jobs at home claim is false. What about the “improved security abroad“ and the labeling of the weapons industry as “defense”?
Tanks have no more function against a foreign invasion than they do against hijackers of airplanes or against mass-shooters in schools or against climate collapse. Thus “defense” is twisted into the vague concept of “security abroad.” Yet, clearly most U.S. travelers abroad are not going to be accompanied by tanks.
A review of the data has concluded that: (https://peacesciencedigest.org/military-support-and-an-increased-vulnerability-to-terrorist-attacks/ ) “Deployment of troops to another country increases the chance of attacks from terror organizations from that country. Weapons exports to another country increase the chance of attacks from terror organizations from that country. Ninety-five percent of all suicide terrorist attacks are conducted to encourage foreign occupiers to leave the terrorist’s home country.”
If facts are insufficient, let’s appeal to authority. On February 27, 2017, President Donald Trump said, “Almost 17 years of fighting in the Middle East . . . $6 trillion we’ve spent in the Middle East . . . and we’re nowhere, actually if you think about it we’re less than nowhere, the Middle East is far worse than it was 16, 17 years ago, there’s not even a contest . . . we have a hornet’s nest . . . .” (http://www.realclearpolitics.com/video/2017/02/27/trump_we_spent_6_trillion_in_middle_east_and_we_are_less_than_nowhere_far_worse_than_16_years_ago.html)
An actually defensive defense industry would not resemble the current one. There have been no recorded terrorist attacks driven by resentment at the provision of aid. A tiny fraction of U.S. military spending could end starvation on earth. (“The World Only Needs 30 Billion Dollars a Year to Eradicate the Scourge of Hunger,” Food and Agriculture Organization of the United Nations, http://www.fao.org/newsroom/en/news/2008/1000853/index.html ) Doing so would actually increase security, not to mention actually helping people — if anyone cares about such things when they don’t help start wars.
Sincerely,
David Swanson
--
David Swanson is an author, activist, journalist, and radio host. He is director of WorldBeyondWar.org and campaign coordinator for RootsAction.org. Swanson's books include War Is A Lie. He blogs at DavidSwanson.org and WarIsACrime.org. He hosts Talk Nation Radio. He is a 2015, 2016, 2017 Nobel Peace Prize Nominee.
Follow him on Twitter: @davidcnswanson and FaceBook.
Help support DavidSwanson.org, WarIsACrime.org, and TalkNationRadio.org by clicking here: http://davidswanson.org/donate. Sign up for these emails at https://actionnetwork.org/forms/articles-from-david-swanson.
Posted by Common Ills at 4:56 PM

Some Tweets from Sharyl Attiksson