The silences on Iraq 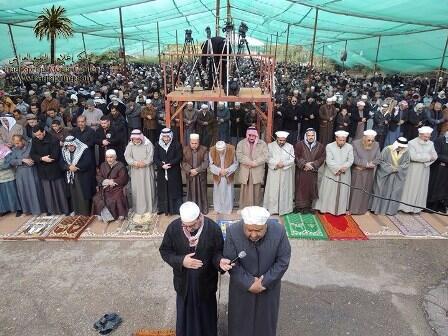 Iraqi Spring MC notes protests took place in Ramadi, Tikrit (above), Rawa, Samarra, Jalawla, Baquba, and Falluja. Today's protests are part of a series of continuous protests which have been ongoing since December 21st.  They are soon to hit the one year mark.

At what point does the world press intend to provide serious coverage?

Why are they so silent?

I doubt it but if they are scared, try being an Iraqi journalist, with no protection from western bosses.  Saturday, Aswat al-Iraq reported:

Press Freedoms Observatory reported that the Iraqi police are "pressing" journalists to "sign written pledges not to practice their field work", as well as detaining them for hours in Najaf and Missan cities.
Baghdadiya correspondent in Najaf Rasha al-Abidi said to the Observatory that she "suffered reactions by the people when covering the latest floods in the city".
She added that one of police officers demanded her to sign a written pledge not to work in journalism "for good" in order to release her, but she refused till some personalities interfered for her release, while her camera was kept with the security force.

These are Nouri's forces and this is what they're doing to journalists -- on Nouri's orders.

Nouri doesn't want reality conveyed.  He wants to shut down the press -- especially now as he's seeking a third term.

And instead of joining the Iraqi press in a fight for truth, the world press leaves them alone, leaves them stranded.

As a result, they're sitting ducks.

And yet they still show the courage to report.

It's enough to make you cry.  Here are reporters who, by telling the basic truths of what can be seen with the eye -- like the flooding -- are risking their lives because they believe in a free press.  But the big western outlets who can call in embassy staff to protect their employees, who can protect their employees by shaming the government of Iraq?  They stay silent.

The illegal war promised so much freedom to the Iraqi people and it delivered so little.

And now as Iraqi journalists strive to do what western media always insists it does, they're left alone by the western press outlets,  and they're targeted by their own government.

Oh, look, there's 'brave' Jane Arraf, reporting on the death of a journalist . . . in Syria!

Go with that safe choice -- and eat yourself into self-hatred, Jane.

I'm not linking to her crap.

The death matters and we would have included it yesterday if there was space (it's an Iraqi journalist).

But look at the  pathetic Jane Arraf.  Nouri's little pet has written how many word about the journalists killed in Mosul?

Because that would require real work.

It's so safe and easy to write about a journalist killed in Syria.  Won't upset Nouri one little bit and isn't that really what the western press (and Qatar's state media since they made the deal with Nouri) is  all about?

Jane Arraf's become for Nouri what Gareth Porter was for the Khmer Rouge.


AFP reports Kawa Ahmed Germyani is the latest journalist to be killed in Iraq.  Last night, the editor or Rayal magazine and a reporter with Awene newspaper was shot dead "in front of his mother at his home in the town of Kalar."

When Aswat al-Iraq reported their story on November 30th, I spoke to an Iraqi journalist and said maybe I shouldn't be noting the flooding and who's covering it?  Maybe that just made the journalists doing the work bigger targets since it demonstrated some were paying attention outside of Iraq?  And he said that as long as Iraqi reporters were willing to tell the truth, it needed to be amplified.

But I also wondered at what point they just give up and say it's not worth being killed for?

That's what it really means to be an Iraqi journalist.  You can be arrested and/or killed for just reporting the basics.

Forget investigative reporting, just reporting on a protest or a flooding -- not even reporting the connection between Nouri's refusal to spend any of the oil billions on fixing Iraq's sewage system which is causing most of the flooding, but just reporting that it flooded -- can put you at risk.

They risk their lives for these basic stories and the western press can't even get off it's ass to amplify the brave reporting by Iraqi journalists.

I've said it repeatedly here.  I risk nothing calling out Nouri al-Maliki.  He's a thug.  But he can't touch me.  I'm not in Iraq.  State of Law can send the griping e-mails they want.  It doesn't hurt me, it doesn't threaten me.

Western media outlets amplifying the work of the Iraqi journalists wouldn't be risking a damn thing either.