We're noting the protest mainly because Tuesday's Flashpoints (KPFA) featured a report on the protest that Dennis Bernstein and others with Flashpoint did.  The protest was at UC Berkeley School of Law.


Stephanie Tang: The Bush regime opened this torture chamber at Guantanamo not just to imprison captives after 9/11 as it expanded it's military adventures into the Middle East.  The Bush regime opened Guantanamo  to send a message to the world that the US could operate with impunity, outside the norms of international law.  Obama made his first promise upon taking office that he would close this immoral hellhole of a prison. He's had 6 years to close it.  He has had 6 years to punish those who ordered the torture and forever repudiate indefinite detention and secret renditions as American policy.  But Obama has done none of this.  We are here from the World Cant Wait, the National Lawyers Guild, CodePink and other people who care about justice, who stand up for justice and we demand the closure of Guantanamo immediately We demand the accountability that can only mean prosecuting the war criminals from George Bush and Dick Cheney on down.  This is the only way that torture will not become a permanent part of the arsenal of the US power spreading around the world.  Torture is a war crime it is never acceptable or legal under any circumstances. This is clear in international law and US law.  The third reason we're here today is particular to the University of California and it's law school  at Boalt Hall.  There is a War Criminal on the faculty here. John Yoo is a tenured professor. He wrote the memos that enabled the Bush-Cheney regime to establish their formal official torture program. John Yoo continues to publicly promote that program, defined it and, therefore, he is still doing harm.


The report also featured an alumni informing the dean's office, "I came here in 1959 because there was a wonderful man on the faculty named Frank Newman, a great supporter of human rights became dean and became a justice and he would never permit someone like John Yoo to speak in front of his class -- let alone become a professor.  And I think that it's important  to understand that the reputation of this law school is based on people like Frank Newman and that the reputation, if it's going to be based on people like John Yoo people aren't going to come here."


Moving to Iraq,  Ben Ariel (Israel National News) reports that Iraq has donated $28 million to the Arab League for the Palestinians.  In response, the following Tweet was posted:


What are they Tweeting about?

16 children have died in Iraq from exposure to the cold.  Al-Shorfa reports that they died in central and northern Iraq according to Iraq's human rights commission member Masroor Aswad who couldn't wait to harness a tragedy by claiming all the dead children were homeless as a result of the Islamic State.  A claim, of course, that he can't back up nor can the press truly investigate.

Of course, that reality didn't stop the US State Dept from presenting a claim as fact and spreading it.


16 children are dead and for the governments of Iraq and the United States, this is 'wonderful' because they can use it to attack the Islamic State.

So eager are they to use these deaths, they fail to factor in how it looks to the rest of the world.

As the Tweets note, Iraq's got plenty of millions to give . . . to those outside of Iraq.  While Iraqi children freeze to death, Haider al-Abadi cuts a charity check for $28 million.

But Pierre Bienaime (Business Insider) notes, "According to Defense News, the US donated $300 million in military equipment to Iraq in 2014, and will deliver 6 M1 Abrams tanks and 50 humvees to the Baghdad government at no cost."  And that's just one aspect of the millions and millions of military aid the US government provided Iraq with.  But only $109 million to help the refugees.
The US government funds violence full out but when it comes to humanitarian causes they play cheap and the world sees it.

Despite this, they have the gall to attempt to use the deaths of 16 children -- deaths that could have been prevented had the US government or the Iraqi government not been so cheap and shown so little value?

They don't only fail to win the hearts and minds of the Iraqi people, they spark a global outrage as they make clear how little value they place on human lives.


Meanwhile, the two greedy factions turn on each other as the 'plan' of US President Barack Obama -- bomb from the air and bomb some more -- produces little-to-no results.

Ahmed Rasheed and Ned Parker (Reuters) report that Barack's envoy John Allen, retired US general, heard complaints yesterday and today from figures including Iraq's Prime Minister Haider al-Abadi and Speaker of Parliament Salim al-Jubouri.   The latter is a Sunni and his comments that the US government is not doing enough militarily can be seen as going to the refusal to arm Sunni tribes in the fight against the Islamic State.

Alsumaria reports that US Gen John Allen declared today that the US government would not be arming Sunni tribe leaders.  It is up to the Ministry of Defense, Allen insisted, to arm the Sunnis.


Again, this is not a minor issue for al-Jabouri.  He raised it last month with US Senator John McCain.  From the December 27th snapshot:


As we noted Friday morning, US Senator John McCain was in Iraq and scheduled to meet with Speaker of Parliament Salim al-Jubouri.  Anadolu Agency reports they did meet and that Jubouri asked for the US to arm :100,000 Sunni tribesmen living in four regions that are controlled by the ISIL." 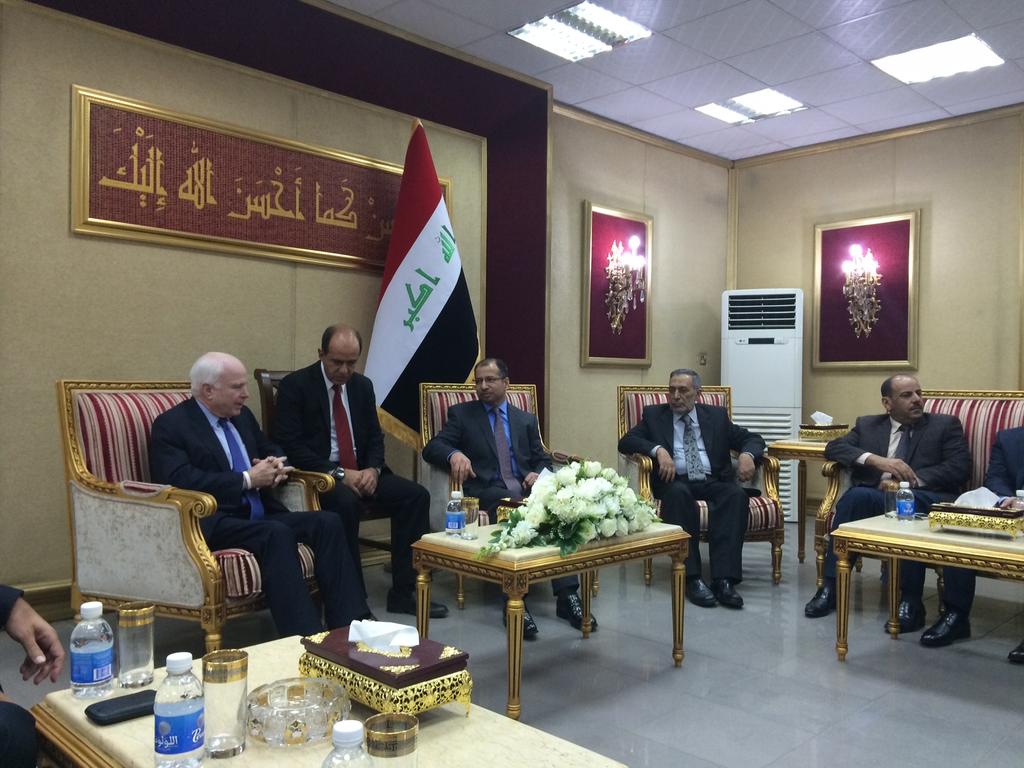 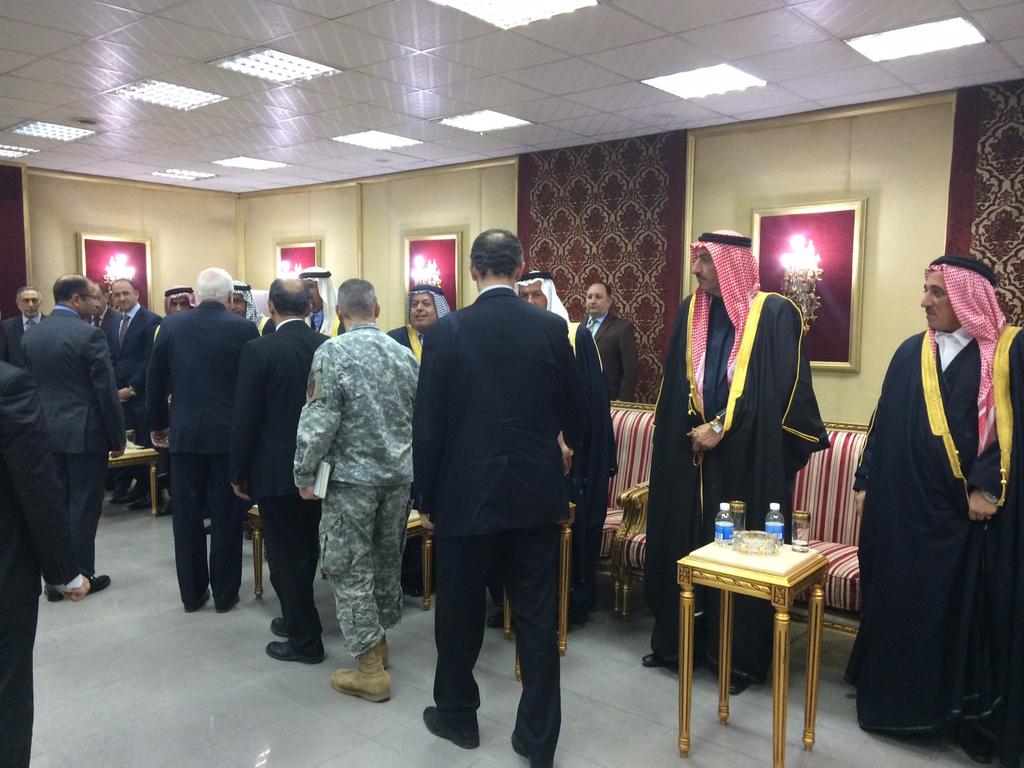 Again, though the request the Speaker made to McCain is not being factored into the coverage today of the criticism, the reality is this request is the spine of the criticism being made by al-Jabouri.

As for Iraq's Prime Minister?

He's been making complaints publicly prior to meeting with Allen on Tuesday.  As AFP reported at the start of the week, the Prime Minister slammed the coalition the US government has put together declaring it was taking too long to provide "military support" to the Iraq military.

Rasheed and Parker note today, "A statement from Abadi's office after the talks said US-led alliance should 'increase the tempo of the effective air strikes on Islamic State positions', and also called for the training program for Iraqi security forces to be expanded."


After the meeting, Haider tried to put a smiley face on it with the following Tweet: 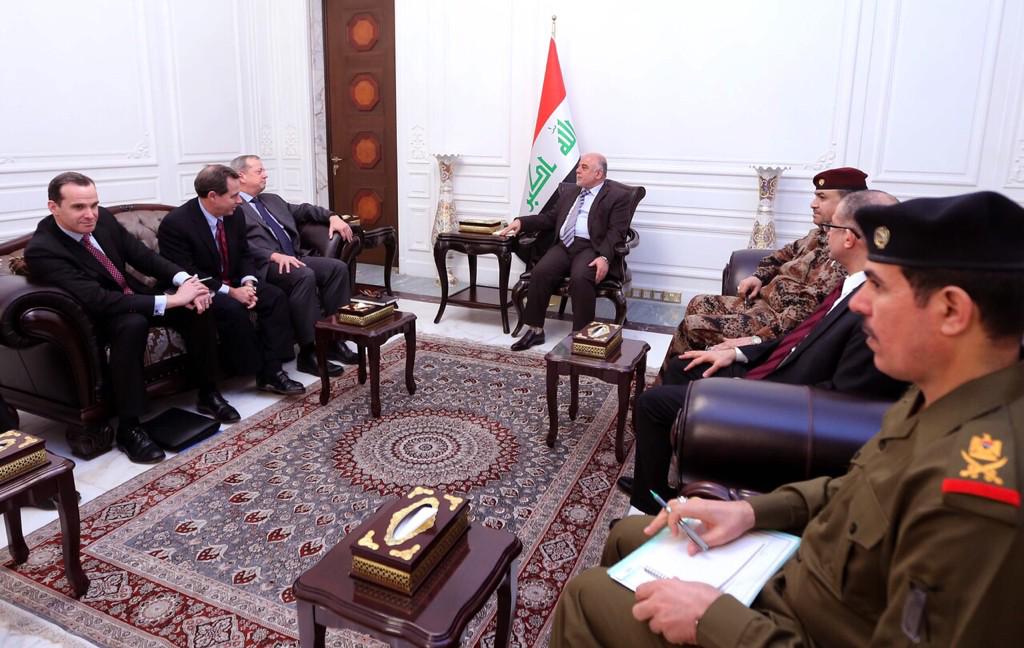 
Adding to these problems, the White House has lost a powerful ally in Iraq.  Press TV reports:


The head of the Islamic Supreme Council of Iraq has dismissed the US-led coalition’s sincerity in its fight against the ISIL terrorists, saying Iraqis can defend their country on their own.
“People of Iraq have the ability to liberate their homeland from the terrorists of ISIL and there is no need of foreign interference and international or American forces,” said Ammar al-Hakim.


Ammar al-Hakim is someone factions in the US government have long supported to be Prime Minister.  He has charmed many US officials visiting Iraq as well as many foreign correspondents. He's managed, within the Islamic Supreme Council of Iraq, to fill the shoes of his late father.  He's emerged as a very powerful Shi'ite leader. And now he's saying the US military is no use to Iraq.

This rejection comes on the heels of Moqtada al-Sadr making similar remarks.  While movement leader and cleric Moqtada was never an ally of the White House, Haider al-Abadi is or was.  And Moqtada has called for the US military to butt out of Iraq.

Meanwhile a Sunni segment, represented by Salim, complain about the US government's failure to arm Sunni tribal leaders.

Always taken for granted by the US government which has spent decades manipulating them.  Now the Kurds, tired of waiting for White House support, looks to Germany for arms (the way Sunnis are looking to Jordan).

It would appear all the time Barack has wasted 'building' a 'coalition' to drop bombs on Iraq should have been spent on diplomacy because the support he thought he had within the Iraqi government?  The support he needs to continue bombing Iraq?  It appears to be fading.


And, again, Alsumaria reports that US Gen John Allen declared today that the US government would not be arming Sunni tribe leaders.  It is up to the Ministry of Defense, Allen insisted, to arm the Sunnis.

That decision not to arm is a decision to choose sides in a battle while supposedly insisting that Iraq's government focus on being inclusive.


The White House continues to choose sides -- as it did throughout Nouri's second term.

The decisions they made then allowed Nouri to brutalize the Iraqi people and created the current problem.

Saudi Prince Turki al-Faisal (Asharq Al-Awsat) reminds everyone of the roots of the Islamic State in Iraq:

The group started recruiting disgruntled former soldiers from Saddam Hussein’s disbanded army and played on the grievances of the Iraqi Sunni population, which was angered by Maliki’s sectarian policies and his giving free rein to armed Shi’ite militias to persecute Sunnis. This eventually led to popular uprisings in some of the country’s Sunni-dominated areas, where the people called for Maliki’s resignation and their full civil rights as Iraqi citizens. Maliki duly responded by violently quashing the uprisings, which led to thousands of Iraqis from Sunni tribes either being killed or driven from their homes, especially in the western Anbar province, which forms the main entry point into Syria. And here comes the next twist in the story: due to the lack of any international pressure on Maliki, this new group, now calling itself the Islamic State of Iraq, gained a safe haven in Anbar province, whose residents had fought its precursor, Al-Qaeda in Iraq, so fiercely. The organization then began to form sleeper cells in Sunni-dominated areas, especially in Mosul, and to recruit former members of Saddam Hussein’s army and fighters from the Naqshbandi Army, whose senior members include former Saddam aide Izzat Al-Douri.


There was no international pressure on Nouri -- certainly not from the White House.

And today the White House pursues the same strategy of blindly backing Haider despite the fact that Shi'ite militias, under Haider, target, hunt and kill Sunnis.  No pressure from the White House over that, no concerns.  Nothing.

It's hard to see how doing the exact same thing -- but with a new puppet named Haider al-Abadi -- will help Iraq or stop the violence.


Iraqi President Fuad Masoum and Parliament Speaker Salim Al-Jabouri met on Tuesday in Baghdad to discuss a comprehensive national unity and reconciliation plan to bring together Iraq’s disparate ethnic and confessional communities.
Presidential spokesman Khaled Shuwani told Asharq Al-Awsat both men had agreed during their meeting that “it was time to transform the issue of national unity from being one of slogans to a full-fledged national project taking into account social, political, economic, and security factors, in order to promote peaceful coexistence between Iraq’s various factions.”

Mustafa noted that Iraqi Vice President Ayad Allawi was also working on a unity plan.  Masoum is a Kurd, Salim, we've already noted is Sunni.  Allawi is a Shi'ite but he represented a hope for an inclusive Iraq as head of the non-sectarian political slate Iraqiya.


But Allawi appears to be the only Shi'ite working on this.  And the conspicuous absence of Haider al-Abadi in this conversation is rather telling.