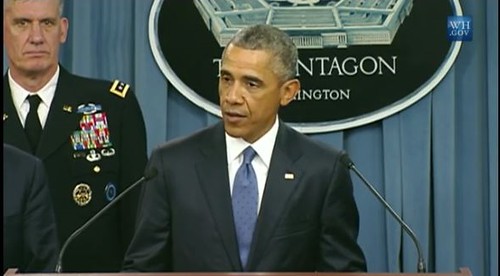 Short take: Barack at the Pentagon insisting that he's harnessed all the powers (and "values') in the fight against the Islamic State including "diplomacy."

No, there's been no efforts to use diplomacy to bring the government of Iraq to the political solution Barack insisted Iraq had to have (June 19, 2014).

Shorter version: Instead of putting the nation to sleep, he should have tried singing "Amazing Grace" again.

Instead, he's singing the same song from June 2014, insisting military alone will not solve the problems "unless it's matched by a broader effort -- political and economic."

Well instead of hitting those high notes, maybe he should just remind John Kerry that he's Secretary of State (not Secretary of Defense) and that he and Brett McGurk need to be focusing on diplomacy to help the Iraqi government reach a political solution?