Strikes in Iraq
Attack, fighter, ground-attack and remotely piloted aircraft conducted seven strikes in Iraq, coordinated with and in support of Iraq’s government:


And Mika and Joe spent two hours addressing it while Matt Lauer devoted the first hour of NBC's TODAY SHOW to exploring how dropping bombs all over the country was supposed to help the Iraqi people while Jim Muir used ABC's nightly broadcast to explore the cost of rebuilding when the day came that all these bombings ended.

Of course the media in the United States can't and won't discuss anything that ever actually matters.

So they wasted yet another day on Donald Trump's dumb words.

And on a very 'delicate' response from so many. 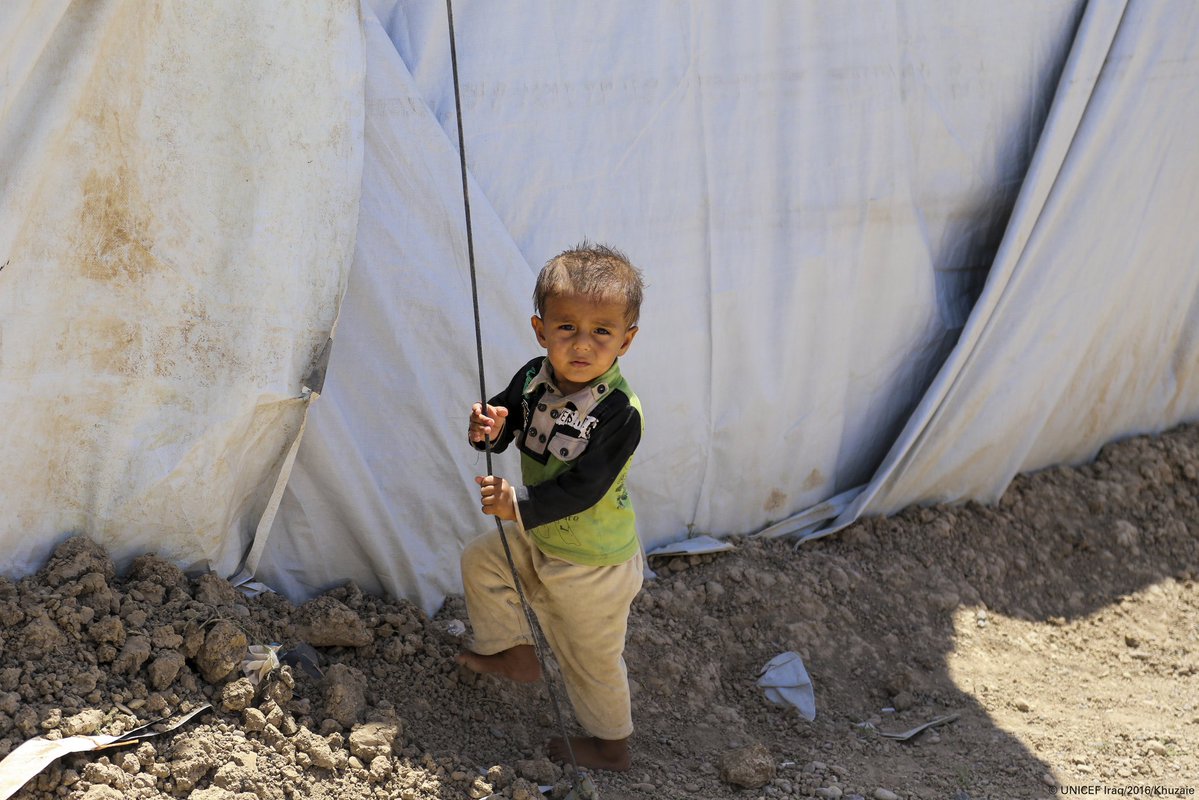 
2 August 2016 – Just back from crisis-riven northern Iraq, where he visited refugee camps for Iraqi and Syrian families and children, actor Ewan McGregor, an Ambassador for the United Nations Children's Fund (UNICEF) has called for more action to save children suffering the devastating effects of brutal conflicts and crises.
“Many of the children I've met in Iraq have been forced to flee their homes, risking their lives on dangerous journeys and have been exposed to unimaginable horrors,” said the UNICEF Ambassador in a press release issued today by the agency.
“The world is facing an unprecedented refugee crisis and we must do more to protect the extraordinary number of children who have been torn from their homes by violent conflict,” he added.
Last week, Mr. McGregor travelled to Debaga camp in northern Iraq where he met with families that have escaped the violence currently taking place in areas surrounding Mosul in the north of the country. He also spent time with Syrian refugees and displaced Iraqi families in camps and communities around Erbil.
This act of humanity should be replicated everywhere, especially on our own doorsteps. It's up to us to tell our friends, our neighbours and our governments that refugees are welcome
Due to the conflicts sweeping across Iraq and Syria, tens of thousands of children have been killed, injured, separated from their parents, forced to work, tortured and recruited into fighting.
“No child should be alone,” stressed the UNICEF Ambassador noting that children uprooted by conflict find themselves alone, without family and in grave danger.


In the press release, the agency added that the situation for children in Iraq is becoming increasingly desperate. Around 3.6 million children – one in five – are at serious risk of death, injury, sexual violence, abduction and recruitment into armed groups.
Many of the children are being ripped from their families and forced to flee on their own, often making dangerous journeys and falling into the hands of traffickers, the agency added in the release.
During his visit, Mr. McGregor witnessed how UNICEF is supporting families fleeing the Mosul area with lifesaving food and water, child protection services and healthcare. Many of the people he met had been previously trapped and had not had access to healthcare, education or basic services for over two years.
“One girl I met called Mirna told me how her family slept in a disused, half-constructed shopping mall for over a year,” recalled Mr. McGregor, praising the local community that donated food, clothes and supplies to her family and really came together to welcome displaced people.
“This act of humanity should be replicated everywhere, especially on our own doorsteps. It's up to us to tell our friends, our neighbours and our governments that refugees are welcome,” emphasized the renowned Scottish actor who in mainstream and indie films alike, from Trainspotting and Beginners and Moulin Rouge.
Mr. McGregor's visit comes ahead of the Summit on Addressing Large Movements of Refugees and Migrants, to be held on 19 September at the UN Headquarters, in New York.

News Tracker: past stories on this issue

How many people, how many organizations have to raise this issue before the American media treats it seriously? 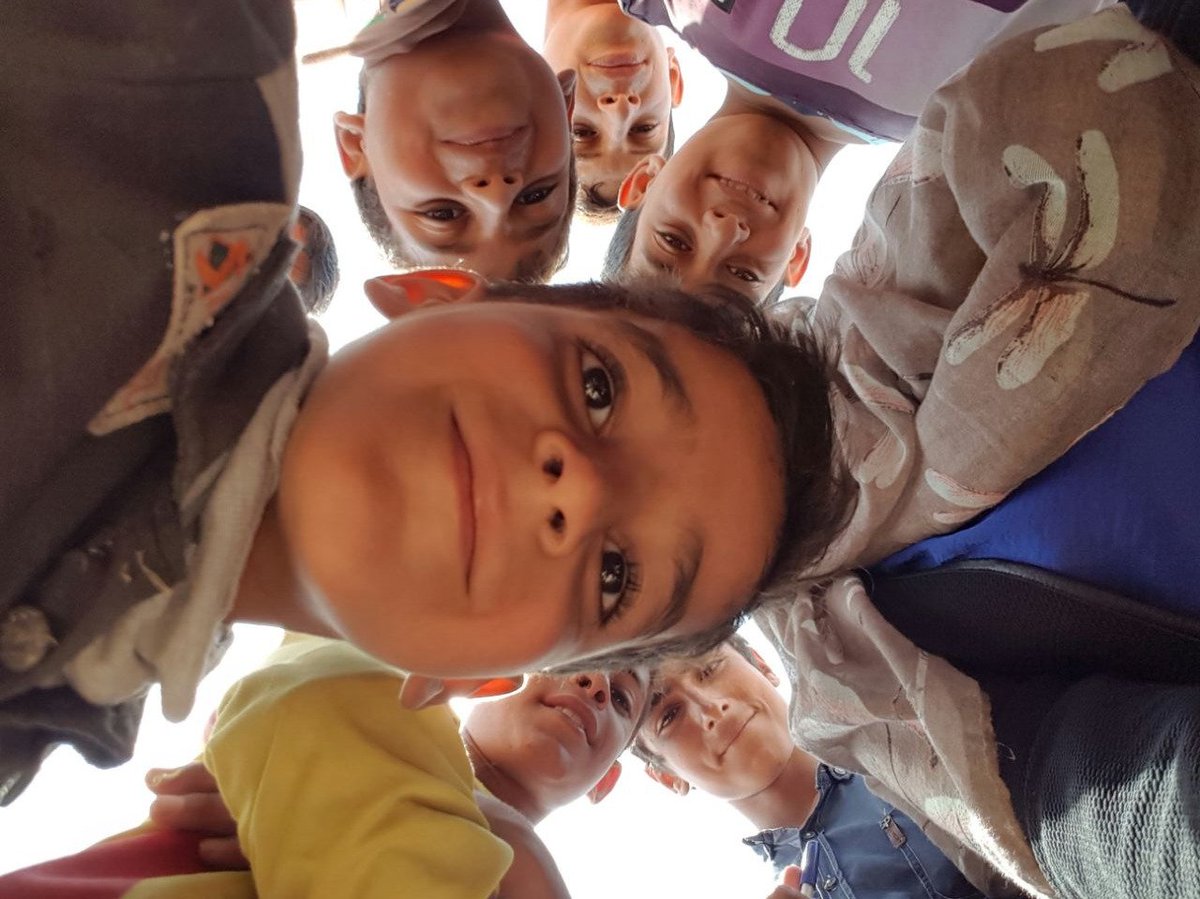 1 and 10.  And not one of today's 'delicate flowers' in the US can step forward and claim that the Iraqi children are like their children, that they are family.

These are the people suffering.

And all the veterans stepping up to attack Donald Trump and ignoring these children need to grasp that it is this sort of behavior that leads to Tweets like this:

That's the response for some when they see all this hand wringing over someone (Trump) shooting off his mouth.

The Trump blow back lacks context and perspective.

A blow hard blows hard.  That's what they do.

We went over it this morning again.  And we noted it yesterday.

But what is news to the likes of THE NEW YORK TIMES?

They sold the Iraq War, remember.

They sold it before it started.

They continued to sell it with lies after it started.

And as E.P. Bannon (WSWS) points out, their reporter Michael Gordon briefed the State Department on what WikiLeaks' Iraq War Logs contained -- before the paper published stories on on the topic.


Speaking of the State Dept, from Tuesday's press briefing:


QUESTION: Okay. At the Aspen meetings last week or over the weekend, the CIA Director John Brennan said, quote, “We’re still a long way from a situation in which,” quote, “the bulk of the people” – and he’s referring to Iraq and Syria – “view their country as representative.” Would you agree or disagree with that statement, that characterization? If you disagree, why would – why do you disagree with the CIA view?

MR KIRBY: That sounds like a question from my history exam in college. (Laughter.)

MR KIRBY: If not, why not. Listen, I’m going to let the – I’m going to let the director speak for his knowledge of views. I’m not a pollster. I don’t – I couldn’t possibly speak with any expertise about the opinions of the majority of Iraqi citizens.
This is what I can speak to, and this is what I do know, that we continue to support Prime Minister Abadi as he continues to work through political reforms and to try to form a more inclusive, more effective, more efficient government in Iraq – oh, by the way, fighting a major presence inside his own borders of a terrorist group, [the Islamic State]. So there’s an awful lot on his plate. There’s an awful lot on the plate of the Iraqi Government. We’re going to continue to support them as they continue to work through these issues.
And he has made progress. There is no question, when you look at Iraqi Security Forces, that they are more inclusive, that their battlefield competence is rising, in many ways because we’re helping with that mission on the ground, and that they have been effective on the ground against [the Islamic State] in many places throughout Iraq: Fallujah, Tikrit – I mean, you could go on and on – Baiji.
So we’re committed to this effort, alongside our Iraqi partners, and we’re going to do everything that we do in Iraq with their consultation, with their permission, with their support going forward.

MR KIRBY: Look, certainly we’ve talked about this, that one of the reasons that we believe [the Islamic State] was able to be so effective two years ago going through Mosul was they went up against Iraqi Security Forces that had not been properly maintained in leadership, in resources, in training and equipment, and an Iraqi Security Force that Prime Minister Maliki paid little heed to when it came to making it more pluralistic and non-sectarian and inclusive. And so when Prime Minister Abadi came into office, I mean, he knew that that was a problem he was inheriting, and he has made strides to try to improve that. And we’ve seen it on the ground; we’ve seen it in Baghdad. We’re going to continue to support him as he works through that.

But look, nobody also ever expected the challenges facing him to be solved overnight. Again, he’s trying to do – anything that – take [the Islamic State] out of the picture and the tasks before him are still daunting. They’re – I mean, given what he inherited and the turmoil that Iraq has gone through for so long, then you add [the Islamic State] into the picture and you can see that there is an awful lot of work that still needs to be done. And we’re mindful of that. We’re committed to standing with him as he does that, as he works through that.


In other news, AL JAZEERA reports:

Iraqi Prime Minister Haider al-Abadi has issued a travel ban on several members of parliament accused of corruption until an investigation is completed.
On Monday, Defence Minister Khaled al-Obeidi accused Parliament Speaker Salim al-Jabouri and other politicians of lobbying for businesses seeking contracts to sell overpriced planes, vehicles and other goods to the armed forces. He said they sought to influence ministry appointments and some tried to blackmail him.


The members of parliament accused by Obeidi included Alia Nasayif -- who had brought the corruption allegations against the minister -- as well as Hanan al-Fatlawi and Mohammed al-Karbouli.
Obeidi said he was being questioned in retribution for his rejection of graft, and accused Juburi and the MPs of seeking to blackmail him in order to pass corrupt contracts.
Juburi later held a news conference rejecting the allegations against him and the lawmakers.


These days Sheehan isn’t doing much organizing. She is housebound in Vacaville, California, taking care of her sister Dede, who is sick with cancer. From a distance, she sees Donald Trump upending the political landscape, causing liberals to praise George W. Bush and conservatives to consider voting for their nemesis, Hillary Clinton. And Cindy Sheehan, loathed by the Republicans and abandoned by the Democrats, doesn’t seem the least bit shocked.

“All these liberals are going, ‘Oh, look, even conservatives may vote for Hillary!’ ” she said with a laugh. “And I’m like, yeah—why aren’t you ashamed?”

The Vice President spoke today with Iraqi Prime Minister Haider Al-Abadi to discuss the latest political and security developments in Iraq.  Both leaders underscored the critical importance of sustaining  momentum in the fight against ISIL and reviewed ongoing efforts to enhance Baghdad security.  Both leaders discussed the urgency of humanitarian and stabilization efforts for the Mosul campaign and the importance of mobilizing international support for those efforts.  Prime Minister Abadi thanked the Vice President for the vital role the U.S. Government played in mobilizing more than $2 billion in humanitarian and stabilization support for Iraq at the July 20 pledging conference in Washington, D.C.  The Vice President conveyed continued U.S. support for a unified, federal, and democratic Iraq, and encouraged close cooperation between the Government of Iraq and the Kurdistan Regional Government as they take steps to put ISIL on a path to lasting defeat.  Both leaders pointed to ongoing successes as a sign of the close strategic partnership between Iraq and the United States.