Each time emergency workers return to the Mansour district ambulance station after a run, they jot notes in a dog-eared logbook that doubles as a grim diary of life here in the capital.
Sept. 10, for example: bombing with two dead.
Or Sept. 29: woman shot in the abdomen.
Oct. 10: man with shrapnel wounds.
Ambulance workers have among the clearest views of Baghdad's descent into chaos. As the city has disintegrated around them, they have been left to pick up the pieces. They are often overwhelmed, and have increasingly become targets themselves.

The above is from Michael Luo's "As War Ravages Baghdad, City’s Ambulance Workers Must Pick Up the Pieces" in this morning's New York Times and it's a sure sign that Dexy is out of the Green Zone and out of the country that the issue can even be covered. 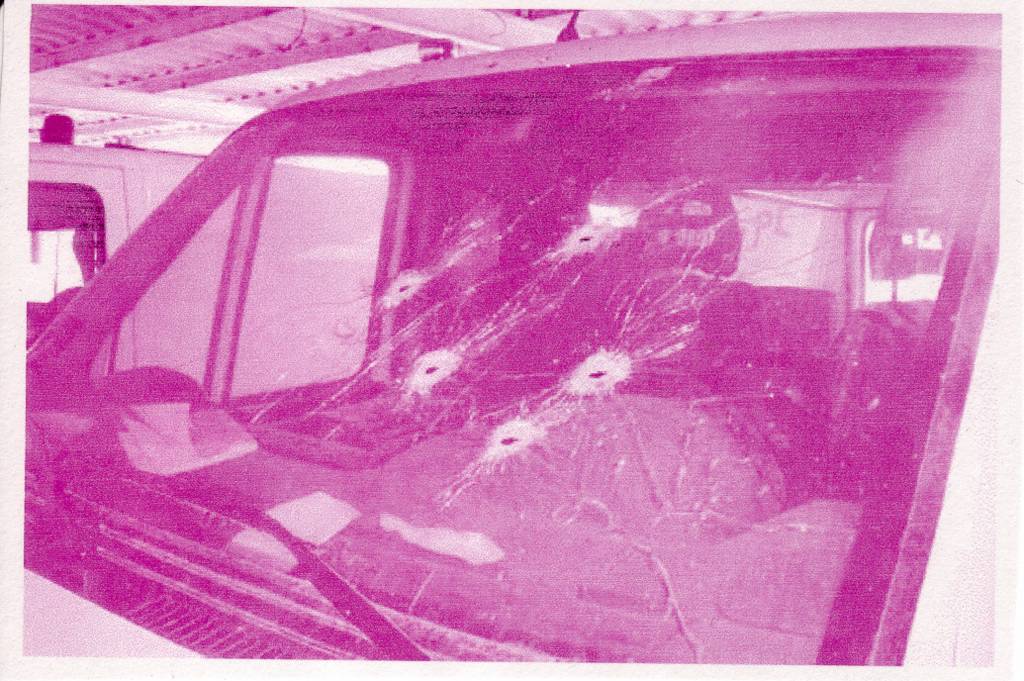 The photo is from Dahr Jamail's [PDF format] "Iraqi Hospitals Ailing Under Occupation" a report/study that was issued in the spring of 2005 and the bullet holes in the windshield came not from 'insurgents' but US shooters. [For those who can't read PDF, there's a summary in this entry.]

That's one of the stories the Times could never tell in the days of Dexy. Luo's looking at the violence in Iraq today and commenting on that. There is a story before it and it needs to be told as well.

For a look at today's realities, Luo has a good article (it's worth reading) but the realities of what came before (and what was hidden by the Go-Go Green Zoner Dexy -- who laughably was used as an 'expert' in Sunday's Times and only flaunted his ignorance yet again) are never to be told by the paper apparently.

The only harsh criticism I have the article the paper runs is that Luo notes: "Ambulance crews are also treated with suspicion by American troops because militants have been known to use ambulances to transport weapons or bombs. The Americans frequently pull over ambulances in the middle of runs to search them." If they "have been known" to do that, then surely Luo can provide examples?

Iraqi Prime Minister Nouri al-Maliki called Tuesday for a regional conference on stabilizing his country but rejected a proposal from U.N. Secretary General Kofi Annan that it take place outside Iraq.
"After preparing the proper political atmosphere, we will call for holding a conference in which all those countries that are interested in the security and stability of Iraq will participate," Maliki said in a televised speech in Baghdad.
He said he would send envoys to neighboring countries, which he did not name. He also did not explain what a proper political atmosphere would be. An aide close to Maliki said the prime minister wants the conference to take place in Iraq under the Iraqi government's terms.

And in the Times? On A12, Philip Shenon holds hands with Lee Hamilton. You feed the paper enough (useless) quotes (unsourced) over the years, you get the Times' equivalent of a Vanity Fair cover. (No offense to friends at Van Fair, I was aiming at the Times with that one.) It's Shenon 'testifying' for Hamilton -- in the original root of the word. (No link, the article isn't worth reading, isn't worth printing, isn't worth wrapping fish in.)

ICCC puts the count of the total number of American troops who have died in Iraq since the start of the illegal war at 2908. If you're waiting for the Times headline that the 2900 mark has been passed, you're apparently waiting in vain. CNN's count is 2906. But don't feel short changed, Shenon tells you Lee Hamiliton's really, really cool.

Hamilton says of the white-wash he gave Iran-Contra, "I basically believed them," the liars of Reagan days, "My attitude was, 'I don't have any hard evidence not to believe." Shenon adds that Hamilton led the "investigation into the scandal" which must be a polite way of saying Hamilton snatched the brushes from Tom & Huck and did a two-fisted white-wash all by himself. Hamilton's sitting on the James Baker Circle Jerk, immediately to the right of Baker and is, no doubt, next in line to grab a tug. Hopefully, they've all taken their Viagra (including Sandy Day) because the James Baker Circle Jerk keeps going and going and going . . .