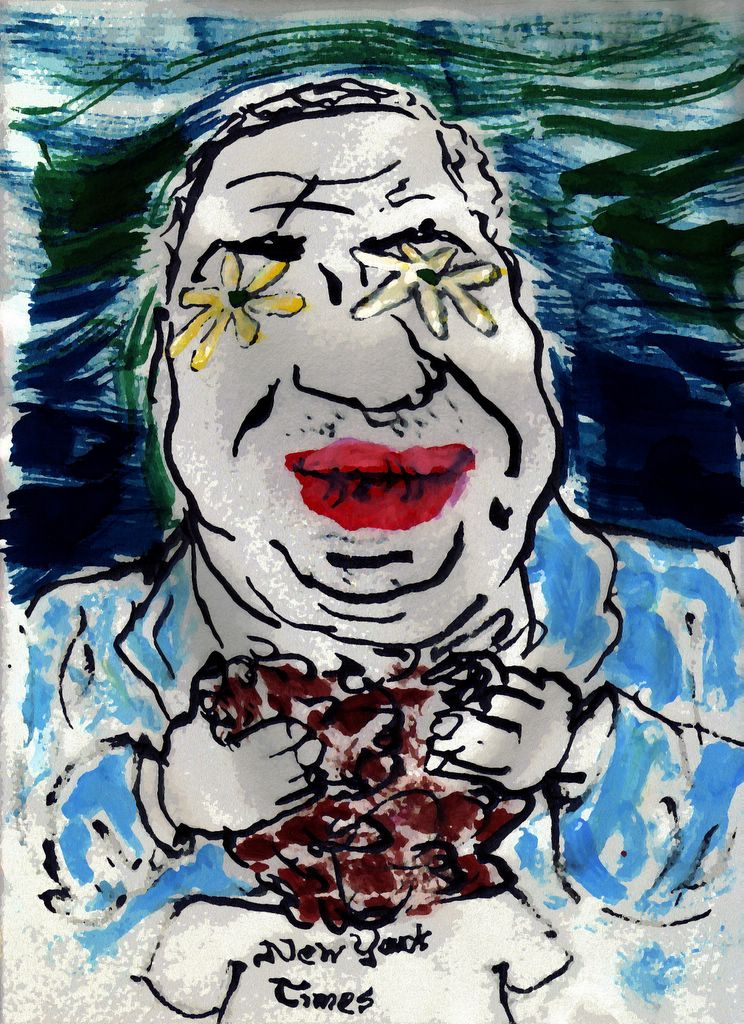 Ahmed Chalabi (illustration from The Third Estate Sunday Review's "Go down, Dexy")? If Bush were the 'tough guy' his cheerleaders think he was, Chalabi would have been found with a bullet to his head long ago. If the US was the democracy it's supposed to be, Chalabi would be standing trial -- right alongside Bush and Cheney -- for War Crimes. Instead the coward and double and triple agent roams Iraq, his knuckles dragging against the ground. AFP reports Coward Chalabi has accused the United States of 'interference.' Interference? From Chalabi? The man who spent over a decade building lies and pressure to force an Iraq War -- a war he was too cowardly to attempt on his own. And now he wants to accuse foreign governments of interference?

Press TV: Why do think Washington has been behind a lot of pressure on the Iraqi government into allowing these individuals who have been affiliated with the Baath party to run for office?

Chalabi: It is unfortunate that the United States has put very narrow foreign policy interests in its relationship with Iraq over the will of Iraqi people. I believe that what the US is following in this regard is the continuing conflict towards Iran. They think that the presence of Baathists in the government and parliament of Iraq would be important card in their hands in stopping the so called spreading influence of Iran in Iraq.

It's unfortunate that a coward like Ahmed Chalabi who fled from Iraq shaking in his boots and pissing in his drawers and then hid out for years and years in other countries only to take his yellow tail back to Iraq AFTER the US invaded was ever installed into leadership. The Iraqi people deserve better, a lot better.

Ernesto Londono (Washington Post) reports that Ahmed and his boy-toy Ali al-Lami run the extra-legal Justice and Accountability Commission which has banned various candidates including Saleh al-Mutlaq who states, "It is not possible to raise the white flag. The entire country and its people shall be threatened." Steven Lee Myers (New York Times) adds, "Mr. Mutlaq, a member of Parliament since 2006, held the No. 2 spot on the ballot of Iraqiya, a secular coalition of Sunnis and Shiites that has emerged as a strong rival of the election bloc led by Iraq's prime minister, Nuri Kamal al-Maliki. The No. 3 candidate on the Iraqiya list, Dhafir al-Ani, was also barred from running." Liz Sly (Los Angeles Times) explains that al-Mutlaq's Iraqi National Movement party has temporarily "suspended campaigning Saturday and hinted at a possible boycott of next month's elections to protest a decision to uphold a ban on candidates because of their alleged ties to the outlawed Baath Party. [. . .] The group called for an urgent meeting of top leaders, a review of the banning process and an emergency session of parliament."

The elections are less than 25 days away (March 7th is the scheduled date) and does it look like things are running smoothly? Does it look like fair and free elections when the two biggest rivals to Nouri are disqualified from running? Does it look legitimate? Or does it just prove that no good comes from an illegal war? That when you install a 'leader,' you create even more problems?

Last Sunday, ICCC's number of US troops killed in Iraq since the start of the illegal war was 4375. Tonight? 4376. Turning to some of today's reported violence . . .

But Mayor Daley? Making an anti-war pitch? Is this not the son of Mayor Richard J. Daley, whose police infamously clubbed the stuffing out of war protesters back in the day? And did not the current Mayor Daley's own police department rough up some Iraq war protesters a few years ago when they tried to march down Michigan Avenue?

Yet there he was last week, venting about war eternal and getting cheered by a ballroom full of community development types. And a lot of us, especially the graybeards who know the history, still can't believe our ears.

My trusty digital voice recorder, however, does not lie: [. . .]

May I ask a question, John?

If you had your trusty digital tape recorder and were present last Tuesday, why the hell are you waiting until Monday to weigh in on it?

We noted it in Thursday's afternoon/evening's snapshot. We also noted it before that in Thursday morning's second entry. That second entry posted way late due to the fact that, although it sounded like Richard Daley, I wanted confirmation that it was before we posted that entry. Richard Daley giving that speech is news. A lot of people I know and like and a lot of people I know and don't like get covered or mentioned here. Richard Daley, honestly, falls into the "know and don't like" category. I was amazed that he gave that speech -- especially considering his behavior as mayor in March 2003. But once it was confirmed (repeatedly) that it was him, I was glad he made the speech.

Why did he make it? I have no idea. He's not anyone I would pick up the phone and call. (And you can be sure he feels the same towards me.) But I'm glad he made the speech and I did toss him in as a "truest" nominee at Third. We made the group decision that a New York Times article (this one) was so important that we would highlight it and a NYT editorial noting it for the truest. Any other week, I would have gladly voted for Daley's remarks (and we do include them in the editorial). Since WBEZ broke the story Thursday morning on the remarks, there's been a lot of is-he-sincere and does-he-mean-it?

But it's the remarks that are news. And I've seen the bulk of the small coverage of his remarks and it all tends to play the surprise angle as the news or at least the lede. I've also seen some nastier pieces which question his right to speak out against the Iraq War and some coverage that suggests it's all an act.

On the latter, I really don't know why he'd 'act' a speech. He knows what the public record is and he knows what happens when you put something on the public record. He made the remarks, he made them in front of a large crowd during a formal speech at a formal gathering. I'm less interested in the 'why' (which is his personal business unless he decides to go public) and more interested in the remarks. And I would wonder if a columnist in tomorrow's paper wants to argue that the remarks were so surprising -- wants to lead with that, in fact -- why the Tribune didn't front page the remarks on Wednesday's paper? Especially when one of their employees now claims he was present, recorded the remarks and realized the significance of them.

In other words, maybe the real 'surprise' angle on this story is that WBEZ had to report it and it had to create a stir online (I'm not referring to this site, many websites have picked up on Daley's remarks in the last days) before the Chicago Tribune took notice of it?

And has the Tribune really taken notice of it?

No offense to John McCarron intended but he writes columns. This was a news story and it's never run in the Chicago Tribune as such.

It was a strong critique Daley offered and stronger than anything I would have ever expected from him so I'll happily note that my opinion of him was somewhat -- if not totally -- wrong. (Coming months may prove me totally wrong. I'd love to be proven totally wrong.)

Isaiah hopes to have a comic for tomorrow. (Today was Valentine's Day, for those who didn't know.) Hopes. Pru notes this from Great Britain's Socialist Worker:

This exhibition documents LGBT history from the 1970s to the present day – through cartoons.

It is a retrospective of the work of cartoonists Kate Charlesworth and David Shenton.

Looking at everything from Section 28 to the civil partnerships of the new millennium, this is a living history of the last three decades of gay rights activism.

The exhibition features guided tours by the artists and Q&As.

The Drill Hall, London, £3 Until 28 February
For details go to » www.drillhall.co.uk

This is a feature-length film adaptation of Stonewall’s play about homophobic bullying.

Designed for teachers to show in schools, it challenges children to think about the language they use and the effect it can have on others.

Kids often call everything from trainers to not liking sport “gay” without stopping to think of the effect it can have.

The film follows six young people as they struggle with their hormones and feelings and attempt to fit in, stand out and discover their own identities.

DVDs of the film will be sent out to every secondary school in Britain by the end of February, together with a teaching pack.

Take a tour through Bristol town centre, looking at some of the places where gay history was made.

Sunday February 21, 2pm £3 donation
The tour will be guided by historian and author Andy Foyle. Email andyfoyle@blueyonder.co.uk or phone 0117 907 0784


© Socialist Worker (unless otherwise stated). You may republish if you include an active link to the original.

If you found this article useful please help us maintain SW by » making a donation.