A year later, the assassination of Hadi al-Mahdi still unsolved

Dropping back to the September 8, 2011 snapshot:

In Iraq, a journalist has been murdered.  In addition to being a journalist, he was also a leader of change and part of the movement to create an Iraq that was responsive to Iraqis.
Al Mada reports Iraqi journalist Hadi al-Mahdi is dead according to an Interior Ministry source who says police discovered him murdered in his Baghdad home.  Along with being a journalist, Al Mada notes he was one of the chief organizers of the demonstrations demanding change and service reform that began on February 25th -- the day he was arrested by Iraqi security forces and beaten in broad daylight as he and others, after the February 25th protest, were eating in a restaurant. The New York Times didn't want to tell you about, the Washington Post did.  And now the man is dead. Gee, which paper has the archives that matter to any real degree.  Maybe it's time to act like a newspaper and not a "news magazine" with pithy little human interest stories?  (That is not a dig at Tim Arango but at the paper's diva male 'reporter' who went on NPR to talk of an Iraqi college this week.)  So while the Times missed the story (actaully, they misled on the story -- cowtowing to Nouri as usual),  Stephanie McCrummen (Washington Post) reported:

Four journalists who had been released described being rounded up well after they had left a protest at Baghdad's Tahrir Square. They said they were handcuffed, blindfolded, beaten and threatened with execution by soldiers from an army intelligence unit.
"It was like they were dealing with a bunch of al-Qaeda operatives, not a group of journalists," said Hussam al-Ssairi, a journalist and poet, who was among a group and described seeing hundreds of protesters in black hoods at the detention facility. "Yesterday was like a test, like a picture of the new democracy in Iraq."


A picture of the new democracy in Iraq, indeed.

Today Prashant Rao (AFP) notes, a year later, despite claims that they weren't responsible and that they would get to the bottom of it, the government has still not solved the assassination (or, I'd argue, even really investigated).  Rao notes:

Mehdi's friends and supporters insist he has not been forgotten, with the radio station he worked at planning a special day of programming, and journalists and activists organising events and demonstrations in his memory this week.
"Hadi would say what people wanted to say but couldn't -- they didn't have his courage," said Karnas Ali, technical director at the Demozy radio station where Mehdi broadcast three 90-minute shows a week.
"His programme was the kind of work that makes enemies," Ali said.
"Whenever I read his comments, I would tell him he was writing a suicide note."
Mehdi's radio show, Ya Sameen al-Saut ("You, Who Can Hear This Voice"), was known for its sharp criticisms of official incompetence and corruption.

Credit to Prashant Rao and AFP for covering the assassination a year later.

Possibly,  the security forces find nothing about the assassination because they're so busy with other things.  Alsumaria reports that amred forces in police uniforms attacked various social clubs in Baghdad yesterday, beating various people and firing guns in the air.  They swarmed clubs and refused to allow anyone to leave but did make time to beat people with the butss of their rifles and pistols, they then destroyed the clubs.

In other news, Dar Addustour reports that US Vice President Joe Biden will present a plan ("roadmap") to Nouri in the coming days on how to resolve the ongoing political stalemate.  Biden was supposed to have already visited Iraq, the outlet reports, but has been waiting for President Jalal Talabani to return.

While Joe Biden's arrival is delayed, three US Senators are in Iraq.  Senator John McCain Tweeted this morning:

McCain, Joe Lieberman and Lindsey Graham are all in Iraq.  When McCain calls it "the final tour of the three amigos," he's referring to the fact that Senator Joe Lieberman's term is expiring and he chose not to seek re-election.

AP notes that the three have called out what they say are flights of weapons to Syria by the Iranian government with Iran using Iraqi air space for the flights.  Nouri is saying he wants proof from the US first.  Silly Nouri.  Has he forgotten what happened to Afghanistan when they asked for proof of Osama bin Laden's connection to the 9-11?  Colin Powell declared they'd get the proof after they handed bin Laden over and then the US began bombing Afghanistan.  AFP adds, "Senators John McCain, Joe Lieberman and Lindsey Graham told reporters in Baghdad that while Tehran had told Prime Minister Nuri Al-Maliki the planes were carrying humanitarian aid, the US believed they had military equipment on board."


In the US Jill Stein has the Green Party's presidential nomination and her campaign notes:


As Jill Stein and Cheri Honkala join the Poor People's Economic Human Rights Campaign and Occupy Wall Street South in Charlotte, our TV ads are running right during the Democratic National Convention. We overcame resistance from Google to airing them. But we still need your support to keep them on the air. Please donate now!
You can see all four of our ads, beginning with "Enough!" and then continuing with three distinct versions of "What Green Means" here:

The timing is vital. The primary season ends on Thursday September 6th. This means that you only have until September 6th to get your contributions matched, dollar for dollar, up to $250, with federal matching funds. And this means that you only have until September 6th to donate the maximum allowable contribution of $2500.
Time is running short for another reason. Federal law requires that our matching funds monies be used in the primaries, by Thursday, and this means that we must pay for our cable and TV ads right now. Your donation right now makes all the difference.
Read on, below for details about how much we need to raise to reach your community:
We've raised $40,000 for these ads. If we succeed in raising another $40,000 (for a total of $80K) by Thursday, our ads will run in college town media markets from the Pacific to the Mississippi to the Atlantic. If we raise another $80,000 (for a total of $120K), we'll have viewership in medium sized cities of population 500,000 to 2 million. And if you help us raise another $160,000, we'll be on in at least a couple major metropolitan areas. The more money we raise, the higher chance that YOUR community will see one of these ads.
See the graph below to get a sense of how many college town, medium city, and major metro media markets we can reach at each level of fundraising. And please donate right now: http://www.JillStein.org/donate 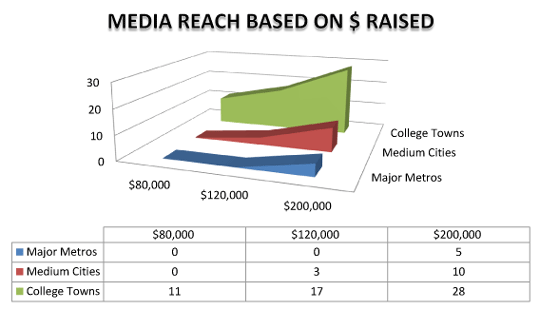 Please donate right now: http://www.JillStein.org/donate. The more we raise, the more ads people will see, and the more we break through the noise of the political conventions. Let's crash the conventions!