National Iraqi News Agency reports that Australian Prime Minister Tony Abbott made a one day trip to Iraq on Sunday.  Sameer N. Yacoub (AP) notes that the visit was "unannounced."

That tells you how bad things are in Iraq.

US officials always refuse to announce.

But other countries, including England and Australia, have been less secretive in the past.


Pool television crews had accompanied the prime minister to the United Arab Emirates, expecting to follow when he went to visit Australian troops stationed in the Middle East.
But camera crews were left behind in Dubai when Abbott travelled to Iraq, where he addressed troops and made joint statements with the Iraqi prime minister, Haider al-Abadi.


While the Australian press was kept out, Iraq's Prime Minister Haider al-Abadi Tweeted: 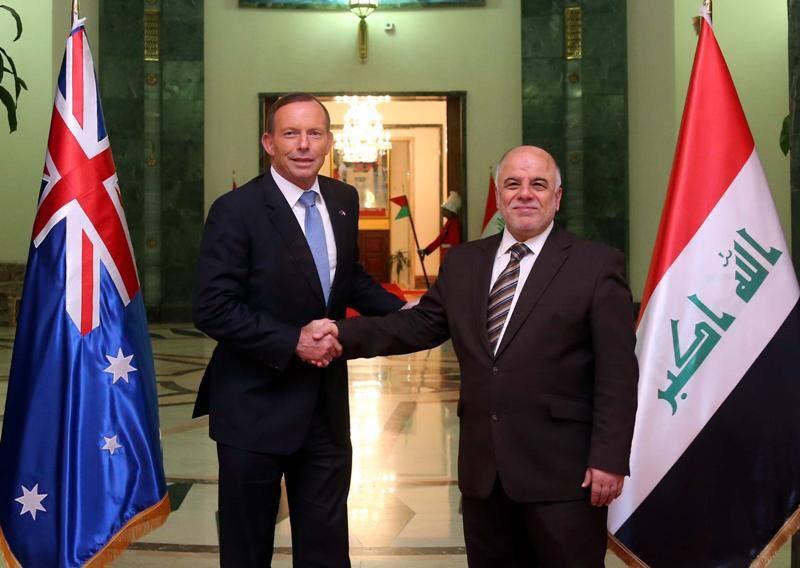 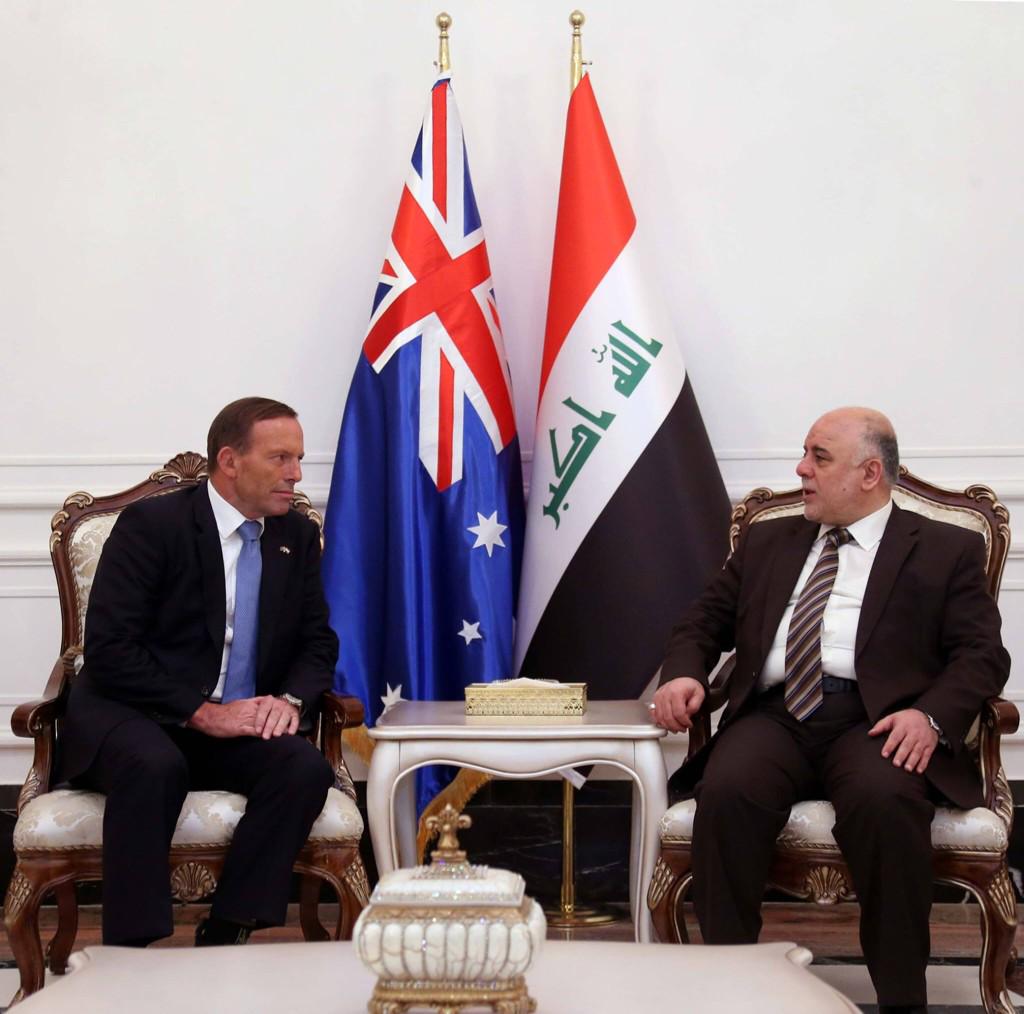 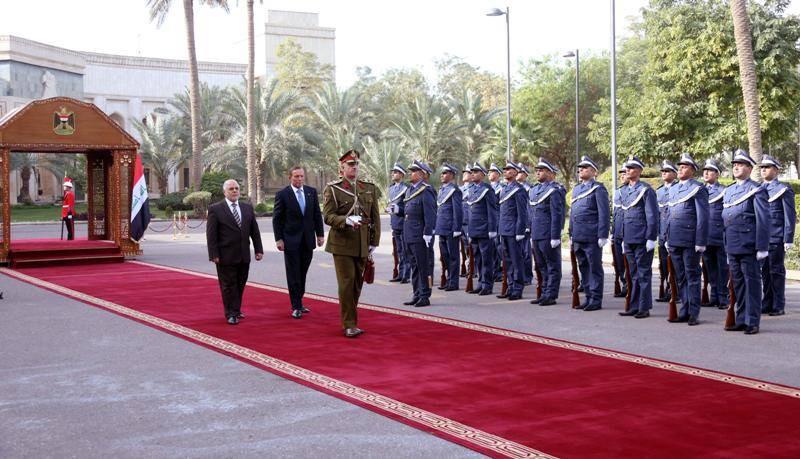 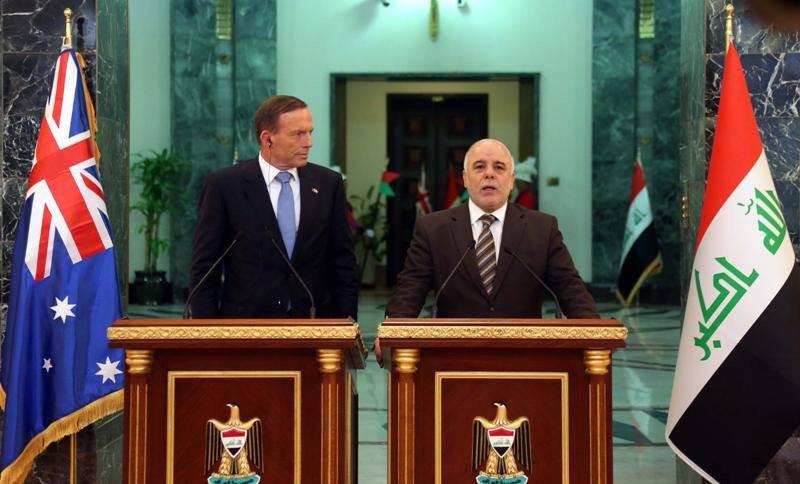 Alsumaria offers a photo essay (six pictures) on the visit.


Australia is one of many foreign nations attempting to bomb Iraq into peace.

The US Defense Dept points out, "Coalition nations conducting airstrikes in Iraq include the U.S., Australia, Belgium, Canada, Denmark, France, the Netherlands and the United Kingdom. Coalition nations conducting airstrikes in Syria include the U.S., Bahrain, Jordan, Saudi Arabia, and the United Arab Emirates."


In some of Sunday's violence, All Iraq News reports that MP Ghazwan al-Shibabani of the Sadr bloc survived an assassination attempt by sticky bombing in Diwaniya.  Movement leader and cleric Moqtada al-Sadr heads the bloc and the assassination attempt follows the announcement by the Sadr bloc last week that they were more than willing to call former prime minister Nouri al-Maliki before Parliament to answer questions as to how, under his leadership, the Iraqi military last June was unable to fight back against the Islamic State and instead fled the fight?

Though some may try to insist that this was an attack by the Islamic State, that's unlikely.

The city is predominately Shi'ite.

It's also been the location of multiple conflicts between Shi'ite groups.  (Since 2005, Moqtada's bloc has been the most powerful political group in the city.)

Iraqi Vice President Nouri al-Maliki, who was widely criticized for sectarian policies during his time as premier, said Sunday that politicians are to blame for the country’s Sunni-Shiite strife.
“There is no problem between the Sunnis and the Shiites as communities, but rather between us the politicians -- we think as Sunnis and Shiites, and we are driving people toward this doom, for which we will bear responsibility before God,” he said.

Maliki himself pursued policies that marginalized and angered members of Iraq’s Sunni Arab minority, especially during his second term as premier.


Nouri's remarks are laughable.  Good for AFP for providing context and not just repeating what Nouri said.

Nouri illegally began bombing residential neighborhoods of the Sunni city of Falluja.  Targeting civilians as part of "collective punishment" is legally defined as a War Crime.  Despite Nouri no longer being prime minister and Prime Minister al-Abadi declaring September 13th that the bombings had ended, they continue daily.  Saturday, NINA reports, 2 women and 1 child were killed in the Iraqi military's continued attacks on civilians in Falluja with another nine people left injured.


I'm traveling in some vehicle
I'm sitting in some cafe
A defector from the petty wars
That shell shock love away
-- "Hejira," written by Joni Mitchell, first appears on her album of the same name

The number of US service members the Dept of Defense states died in the Iraq War is [PDF format warning]  4494.

The following community sites updated on Saturday and today: