When the US is threatened, Barack will do something . . .

Missy Ryan has a report that went up last night at the Washington Post.

Before joining the Post, Missy reported for years from Iraq for Reuters and then she also covered the US Congress for Reuters.  (She may have been the first journalist for a major news outlet to live Tweet a Congressional hearing.)

I like Ryan's work over all but this isn't one of her strongest pieces.

The Obama administration has launched a campaign on Capitol Hill aimed at scrapping a legislative measure that has outraged the Iraqi government and led a senior Shiite cleric to threaten the mobilization of a powerful militia that could threaten U.S. troops.

She's no longer in Iraq and the Post hasn't been reporting on the demonstrations Shi'ite politicians have been organizing since Friday.

As Prensa Latina noted  when reporting on yesterday's demonstration in Dhi Qar Province, others have already taken place in Basra, Baghdad, Maysan and Wasit.

It's not just a statement.  That was news Tuesday and Wednesday -- of last week.

In terms of statements, prior to the demonstrations, you had one Iraqi MP being very specific that it would be retaliation on diplomatic staff.

Could it be troops?

At the demonstrations -- which again started on Friday, the speakers -- multitudes -- have been very clear that they are talking about Americans in and out of Iraq.

That's why, in yesterday's snapshot, I questioned the wisdom of providing these factions with F-16s which, unlike a gun and a bullet in Iraq, can actually easily reach the United States.

As I noted yesterday, I don't think (my guess) that the threats of attacks on US soil would be realized.  But these statements increase the hostility and increase the likelihood that an American in Iraq -- military, diplomatic, journalist, business person -- will be harmed because it is now the norm of these members of the Iraqi government to stage rallies in which threats are made against Americans to huge cheers.

You're creating and feeding a mob mentality.

Which is why it's all the more appalling that Barack refuses to stand with Americans and say, "Enough!"

These threats have to stop and if they don't then the only answer is Iraq loses aid and weapons.

How much of a 99-pound weakling on the beach is Barack that he's going to continue to supply weapons and US tax dollars to Iraq while members of their government threaten violence on the United States?

And why is that Missy Ryan can't make that her lead.  I know for a fact that the editorial board at her paper is gravely dismayed over this issue.

I can't imagine they're too pleased with all that Missy leaves out of her report.

"The Senate is not expected to include similar language in its version of the giant defense bill."

What is the Senate expected to do, Missy?

Better yet, what has the Senate done?

As we noted in last night's snapshot, on Tuesday Senators Barbara Boxer and Joni Ernst introduced a bill.

That bill is what Missy's report is all about so how does she miss it writing a day later?  Why is she wondering what the Senate is expected to do when, in fact, the Senate has done?


This is what Senator Boxer's office issued on Tuesday (a full 24 hours before Missy Ryan filed her report):


WASHINGTON, D.C. – U.S. Senators Barbara Boxer (D-CA) and Joni Ernst (R-IA) today introduced bipartisan legislation to provide for a temporary, emergency authorization of defense articles, defense services, and related training directly to the Kurdistan Regional Government (KRG). Other cosponsors include Senators Lindsey Graham (R-SC), Ron Johnson (R-WI), Rand Paul (R-KY) and Marco Rubio (R-FL). The bill would allow the U.S. to provide direct assistance to the KRG, a critical partner in the fight against ISIS. The companion bill was introduced in the U.S. House of Representatives and has broad bipartisan support across the ideological spectrum.


The legislation provides temporary, emergency authority for the President to provide weapons and training directly to Iraqi Kurdish Peshmerga forces. The three-year authorization seeks to reduce delays in arming Peshmerga forces to fight ISIS, while in consultation with the Iraqi government.


“ISIS is deadly and determined, and Iraqi Kurdish Peshmerga forces – our critical partner in the fight against ISIS – need U.S. weapons as quickly as possible. This three-year authorization would bolster efforts against ISIS which is critical to maintaining a unified and stable Iraq, and imperative to our national security interests. We simply cannot afford to have future delays at this critical moment in the battle,”Senator Ernst said.

“The Iraqi Kurds have been a steadfast and capable partner of the United States, and this bill will help ensure they have the support they need in the fight against ISIL,” Senator Boxer said.

“The United States should empower Iraqi Kurds by providing them with what they need to protect their region from the threat posed by radical Islamic extremists,” Senator Johnson said.

“Defeating ISIS requires active participation from our allies in the region. I support sending arms to the Kurdish fighters who are providing the vital boots on the ground. This Administration claims they need the legal authority to arm the Kurds. This bill removes any doubt that they have the authority and the renewed encouragement of Congress to provide our Kurdish allies the support they need to continue their fight against ISIS and radical Islam,”


“The Kurds are some of our closest partners in the Middle East. The Peshmerga are on the front lines of the battle against ISIL and we need to do all we can to ensure they succeed,” Senator Rubio said.

Since the First Gulf War, the Iraqi Kurds and their Peshmerga forces have played a vital role in supporting U.S. interests and a free Iraq despite limited means of doing so.  Approximately one million displaced Iraqis and Syrians have taken refuge in the Iraqi Kurdistan Region.

Currently by law, the U.S. must provide support to the Iraqi Kurds through the Iraqi central government in Baghdad.


Specifically, the Ernst-Boxer bill would:

Ensure accountability by requiring a report to Congress on U.S. weapons provided to the Iraqi government which have ended up in the hands of Iranian controlled/supported Shia militias.

That's rather key and its omission from Ryan's story does not shore up trust in the report.

Nor does her reliance on Moqtada al-Sadr.

Moqtada's the "radical cleric" -- that's how the western press has billed him throughout the Iraq War.

And as I've pointed out repeatedly since last week, Moqtada's the only one who's consistent.  His position is the same as it has always been: US forces out of Iraq.

Their statements are news and they're no where to be found in Missy Ryan's report.

It was Monday when the Minister of Transportation announced his threat of violence against American which included his vow to "mutilate."

No offense to Anthony Foxx but most Americans don't know his name or what he does.

He's the US Secretary of Transportation -- he'll be two years in his post this coming July.

If Foxx went to the media vowing to mutilate people in any country, you better believe everyone in the US would know his name.

It would be considered news.


So when Hadi al-Ameri makes that threat, it's news.

Except to Missy Ryan who filed Wednesday night but was unaware of the public statements al-Ameri made on Monday.

Now he's not just an MP in the Parliament or just the Minister of Transportation.

He's also the leader of the Badr militia.

And, operating under Iran, he was over the assault on Tikrit -- the one that took weeks to just get to the edges of the city and wouldn't have ever made it in were it not for the US airstrikes after Hadi had led a stand-still, no-progress operations for weeks.

He is a member of Parliament, a member of the Cabinet and commands some of the forces Iraq is using.

And he's threatening harm to the United States.

Unless you're reading Missy Ryan's report.

For those late to the party and who only read English, you can refer to the story linked in this tweet for al-Ameri's threat: 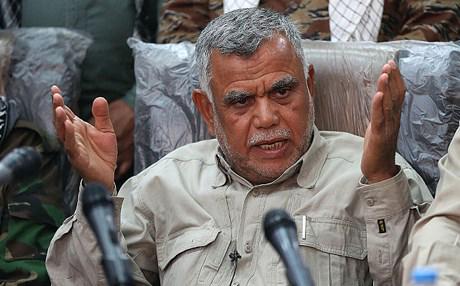 Of the House defense bill, Missy Ryan notes, "The bill cleared its first legislative hurdle last week when the House Armed Services Committee voted to approve it in a 60-to-2 bipartisan vote."

That's not a minor detail (see my rant on Sunday) and she deserves credit for getting that right.

But she has a major story that would be of major interest but she's left out so much her report probably won't raise an eyebrow among most readers.

Maybe the editorial that her paper's supposed to be working on will?

I thought Barack's lie was that he didn't make deals with terrorists.  (His first deal with terrorists was in the summer of 2009 when he agreed to release members of the League of Righteous who had killed US troops in exchange for them handing over 1 British hostage and -- eventually -- four British corpses.)

So what's a terrorist but al-Ameri who is threatening violence to the United States?

And instead of standing and saying these threats are unacceptable, Barack's got the White House working on watering down language in Congress.

I don't think the oath to protect and defend -- the oath Barack took three times as president -- two times due to Chief Justice John Roberts messing it up -- was about him protecting and defending the delicate sensibilities of those who issue threats of violence and harm to the United States.

In his continue silence, he is failing the United States.

I loathed Bully Boy Bush but his madman on the world stage posture probably offered more protection (this is backed up by poli sci political theory) than Barack's repeatedly refusal to call out public threats of violence on the United States.


Jane and Lily Tomlin's Netflix series premiers on Friday.  We'll try to do a heads up later today or tonight.