He stated they were causing mischief in the region.

If that's the opinion of CENTCOM -- one they're willing to testify to -- maybe Hillary's attempts to piggy back on John Kerry's Iran deal aren't so smart?

She's claimed credit for what the current Secretary of State has done.

Because that's what she does now.

Except maybe insisting she came under sniper fire when she did not.

But in 2016, she's all about grabbing credit for things she had nothing to do with it.

Take ObamaCare which she now lies and says was "originally called HillaryCare."

What she proposed in the 90s and what she tried to push through is not what ObamaCare is.

But she'll claim credit for anything.

And maybe that's why so many in Michigan, in yesterday's exit polls, noted how they couldn't trust her?

I didn't support it, I didn't take it down.

Here, if someone e-mailed something on it, we noted it.

Otherwise, I did not criticize the deal itself.

(The nature of the deal making, I criticized and I was far from alone in that.)

3 friends in the administration attempted to sell me on the deal and I gave both my full attention -- one I gave four attempts to sell me on it.  I never saw how it was going to be helpful.  Nor do I now.

But I didn't see it as especially hurtful either so it was a dance I just took a pass on.

Hillary's need to claim credit for John Kerry's work is really tacky and, sadly, typical of who she has become.

Maybe though, as criticism from CENTCOM and elsewhere mounts (an honest partner you make a deal with does not go around creating "mischief" in the region), maybe she'll get the blame for the deal?

She did that to prop up Barack -- whom CODEPINK's Jodie Evans was a bundler for -- a position CODEPINK should have made public and clear.

Barack wasn't Bernie Sanders (truly, Bernie is who Barack pretended to be when seeking the 2008 Democratic Party's presidential nomination).

Medea has another essay full of half-truths as a result of her refusal to admit that she whored for Barack and that she didn't even make a little money (or peace) out of that whoring.


To believe Medea's essay, you have to believe that Hillary is all powerful and that Barack has no spine and no mind and is innocently misled over and over into doing things he wouldn't otherwise do.

So the bulk of her essay is useless.

But we'll note this section of it on CODEPINK meeting with Hillary ahead of the start of the Iraq War:

Having just returned from Iraq, I relayed that the weapons inspectors in Baghdad told us there was no danger of weapons of mass destruction and that the Iraqi women we met were terrified about the pending war and desperate to stop it. “I admire your willingness to speak out on behalf of the women and children of Iraq,” Clinton replied, “but there is a very easy way to prevent anyone from being put into harm’s way and that is for Saddam Hussein to disarm and I have absolutely no belief that he will.”
We thought the easiest way to prevent harming women, children and other living things in Iraq was to stop a war of aggression, a war over weapons of mass destruction that UN inspectors on the ground couldn’t find — which were, in fact, never found, because they didn’t exist. Clinton, however, was steadfast in her commitment to war: She said it was our responsibility to disarm Saddam Hussein, and even defended George W. Bush’s unilateralism, citing her husband’s go-it-alone intervention in Kosovo.

Disgusted, CODEPINK cofounder Jodie Evans tore off her pink slip and handed it to Clinton, saying that her support for Bush’s invasion would lead to the death of many innocent people. Making the bogus connection between the September 11, 2001, attacks and Saddam Hussein, Clinton stormed out, saying, “I am the senator from New York. I will never put my people’s security at risk.”


Medea should be grateful she's a White woman.

As Hillary's repeatedly demonstrated in the last weeks, were Medea an African-American woman, Hillary would have her thrown out by security.


Hillary's past is something she can't escape.

And it's partly why she lost Michigan to Bernie Sanders yesterday.

Someone break that news to her.


Probably better to wait until after she gets over the shock of losing Michigan to Bernie.

Bernie Sanders Verified account ‏@BernieSanders 8h8 hours ago
The corporate media counted us out. The pollsters said we were way behind. But we won. Thank you, Michigan. 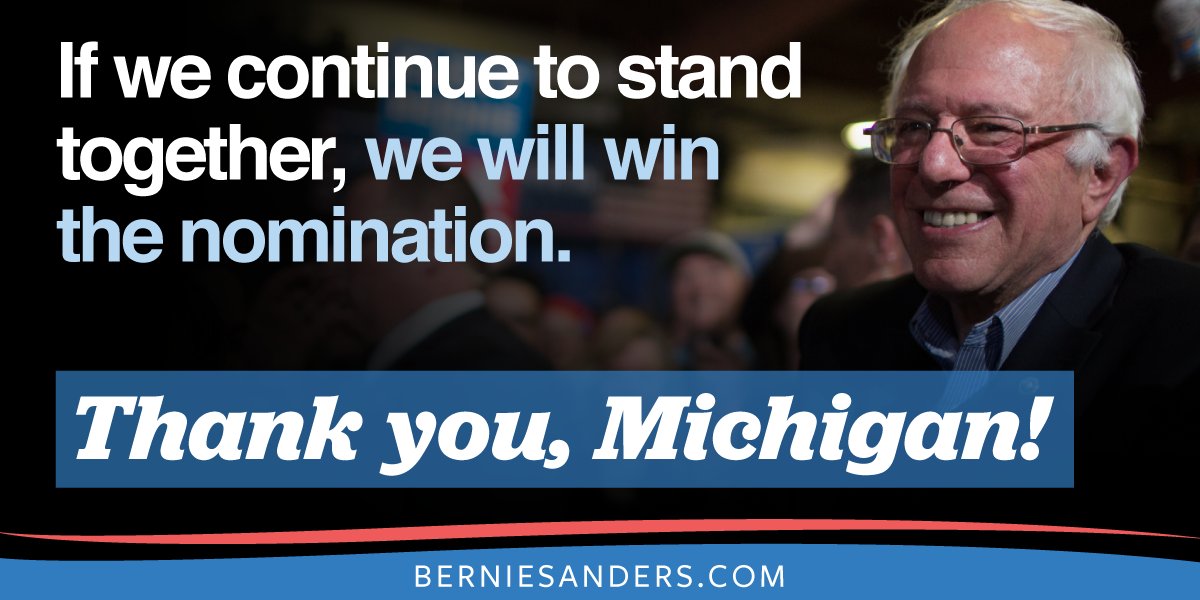 
A friend has an essay (either at SALON or SLATE) that went up before the polling started yesterday and noted that the media was singing a chorus of Bernie's done when that wasn't reality.

\
I'll try to find it and link to it in the next snapshot.

But Bernie's not out and Hillary's lost her southern firewall.  That group of states has voted.


Bernie's supporters are rightly rejoicing.  We'll note some Tweets on the big win in Michigan.


And the following community sites update:
\