Shlama Foundation‏ @ShlamaF 54m54 minutes ago
ATTENTION Iraqis living in the USA: If you OR your parents were born in Iraq, you are eligible to vote in the Iraqi elections TODAY. U.S. voting locations are posted. You must present proof of U.S. and Iraqi citizenship of yourself or your parents to vote. 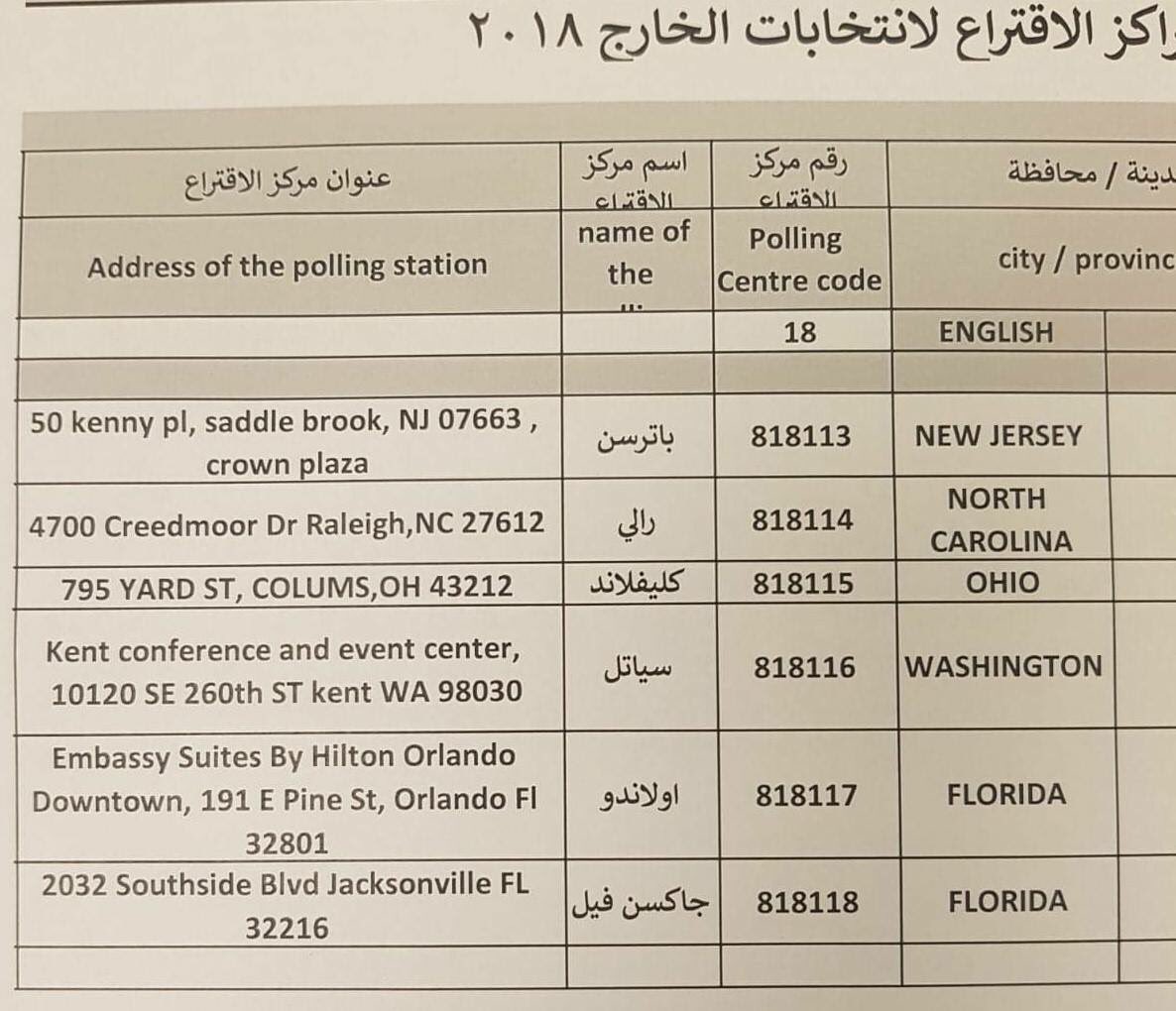 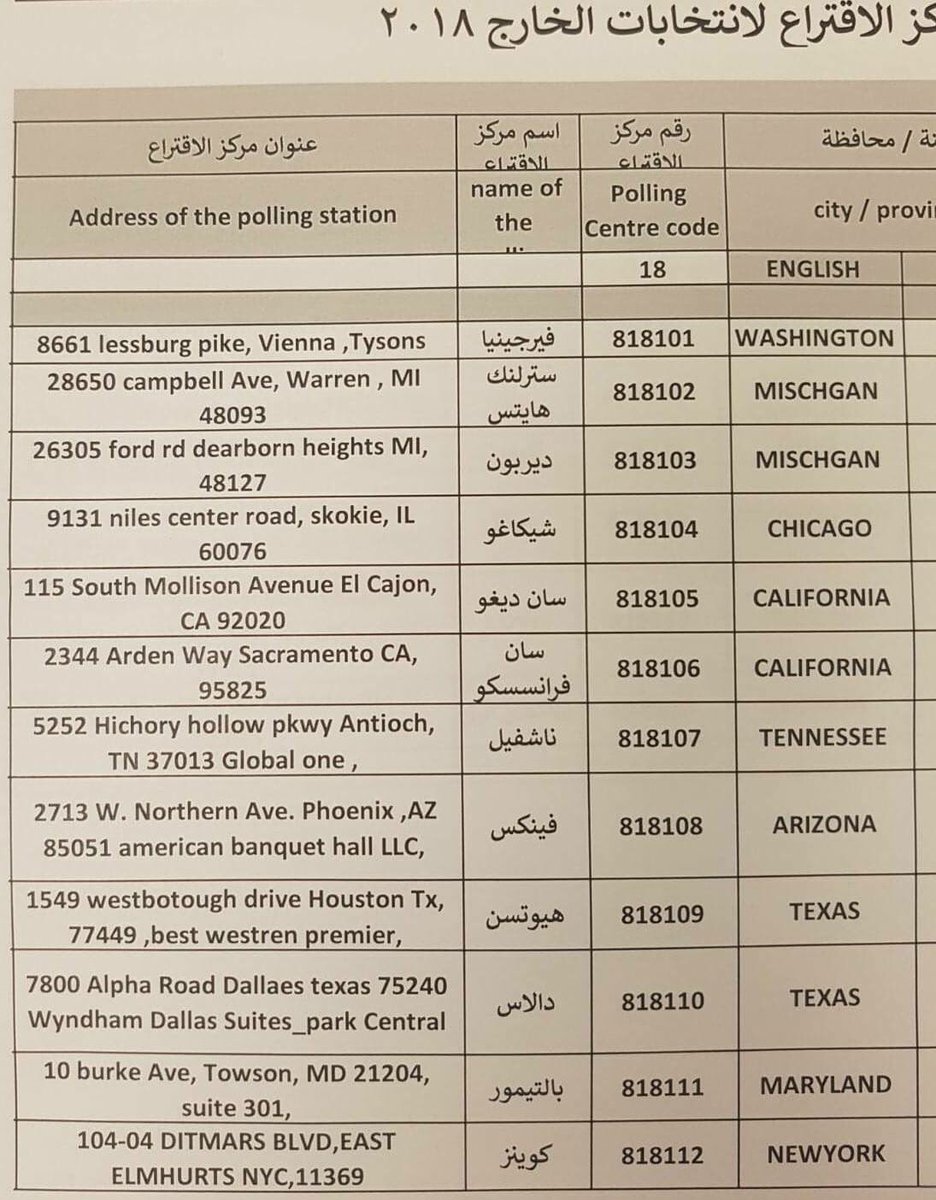 Iraqi Christian HRC‏ @iraqschristians 12h12 hours ago
Iraqi expats and their adult children can vote in the #IraqElection on May 10-11; two days before the general Iraq elections on May 12th. Pictures of Iraqi #Chaldeans and #Assyrians living in USA, Europe, and Australia voting today in the Iraq Elections. #IraqiChristians 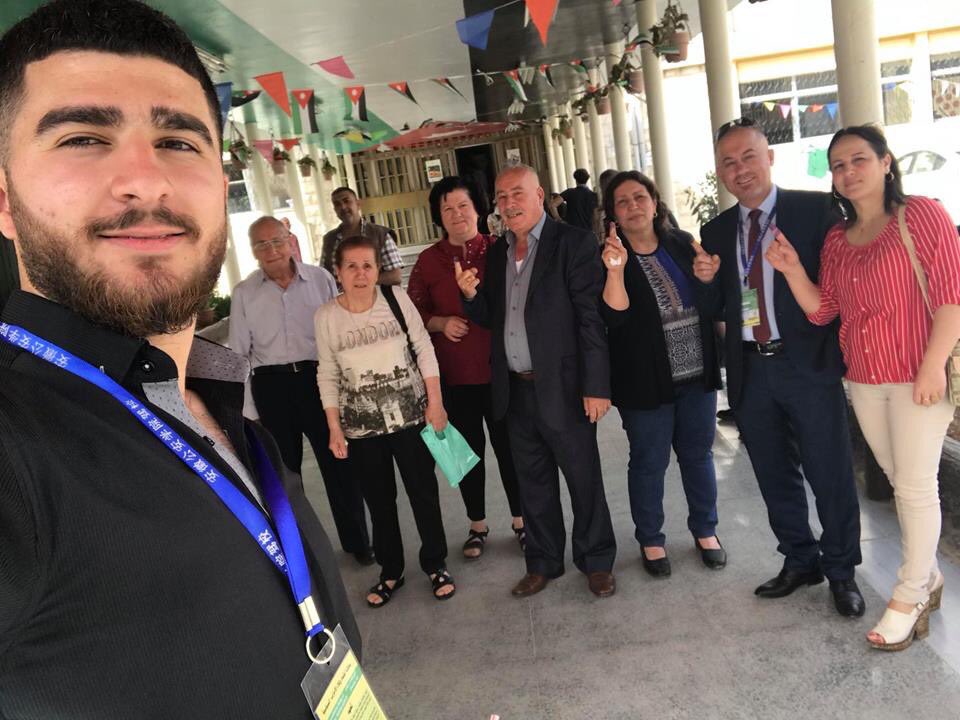 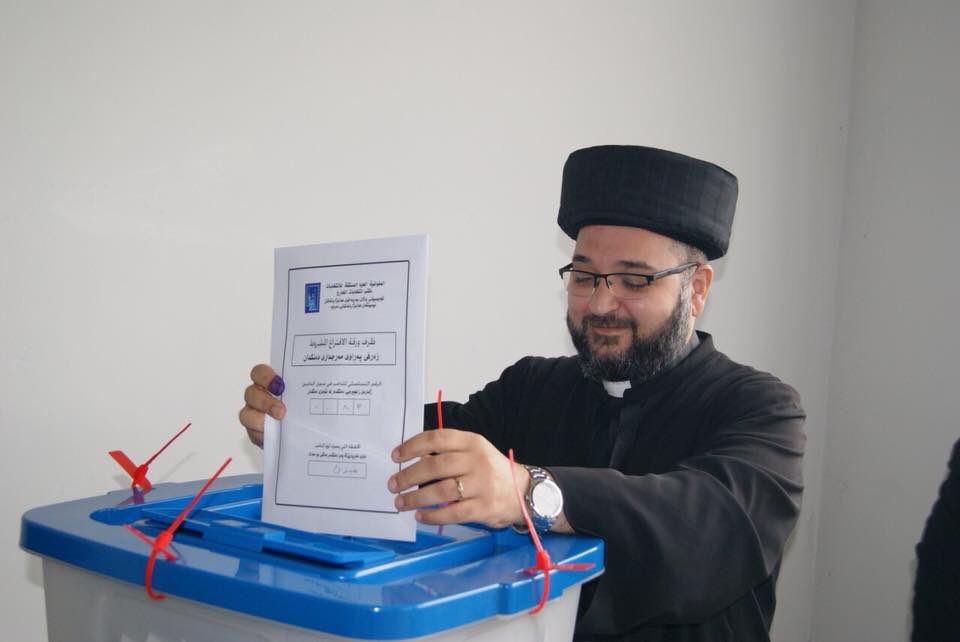 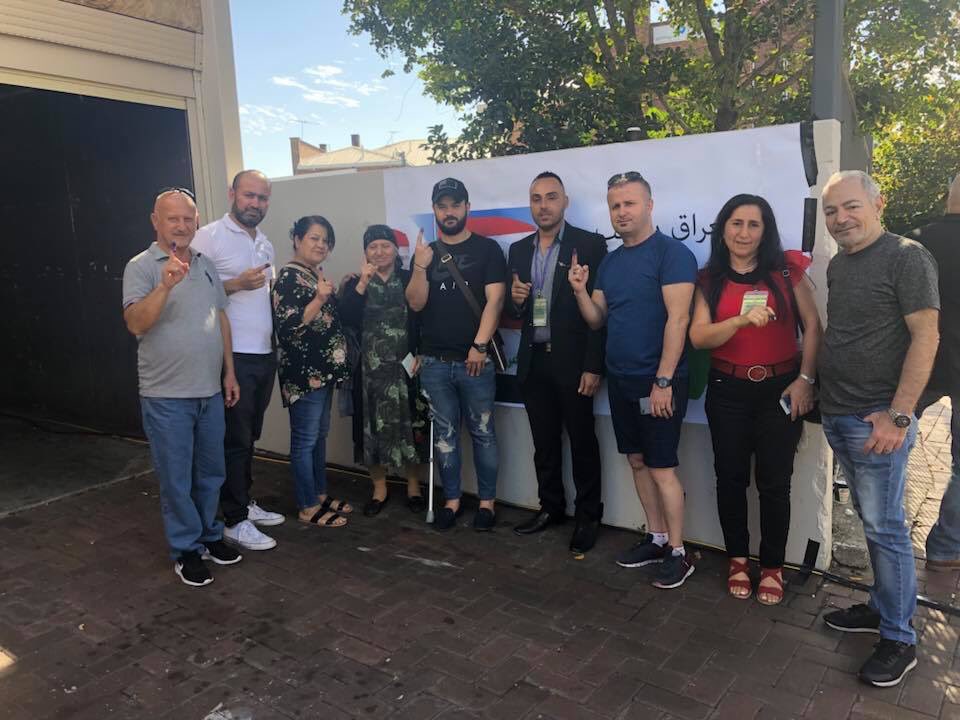 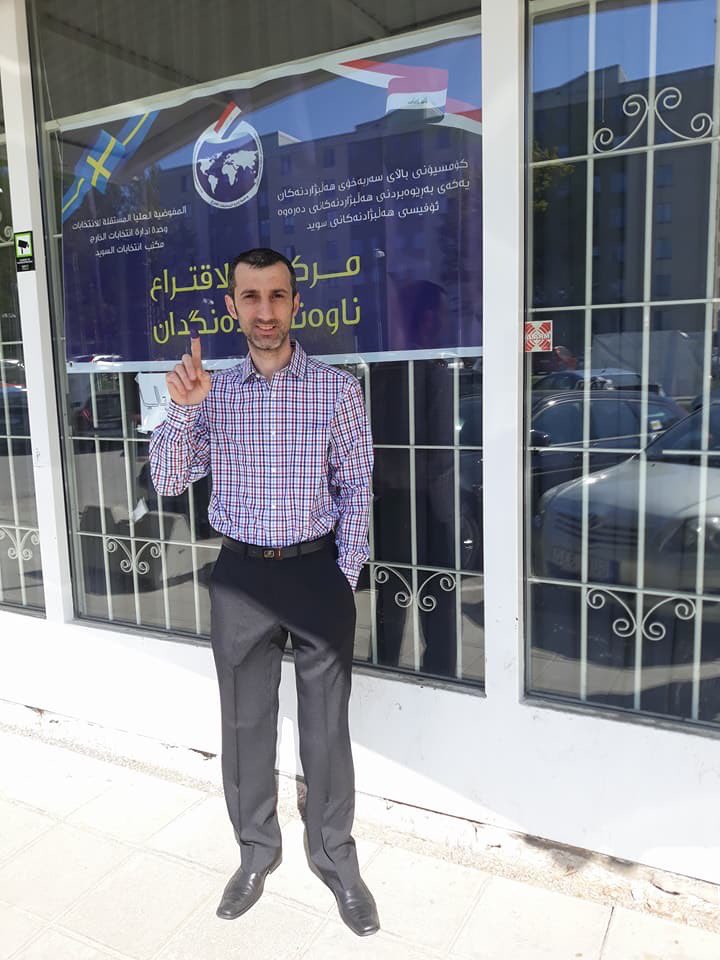 Every single Democrat in the House and Senate should pledge now to oppose any preemptive strike on Iran. Our base should demand this in 2018. We need to prevent another epic blunder like Iraq, which too many Democrats enabled. Let’s be a real opposition party on Iran — no war.
67 replies837 retweets1,971 likes

We need to prevent another epic blunder like Iraq?

Excuse me, when do we need to stop the epic blunder of the Iraq War?

April 24th, the Secretary of the Air Force Heather Wilson and Gen David Goldfein appeared before the Senate Armed Forces Committee and explained that the US Air Force, in 2017, conducted over "172,000 sorties and 98,000 precision air strikes -- over 70% of the total in the campaign -- to support Iraqi and partner forces in Syria and Iraq."  And, no, Wilson and Goldfein did not announce an end to these actions.  In fact, the bombing campaign will continue.

The fakery never ends.  And some (non)action groups join in on the fakery.

WalkOn.org -- they walked on away from Iraq after using the war as a moneymaker and pretending to be against it.  As John Stauber pointed out at COUNTERPUNCH:


I have written previously about how beginning in 2006 the Democrats progressive front group MoveOn, who had the money and PR to position themselves as the leading antiwar organization, worked with Nancy Pelosi to co-opt the movement into a campaign vehicle for the party, making sure the war was funded all the while Bush was in office, and using it like a gift to attack Republicans in 06 and 08.
In the pathetic giddiness that overtook progressives after Obama’s election, there was little notice given to his announcement that there would be no investigation of how America was led to and lied into war, that page would be turned and we would move forward.  After all, the war was a bipartisan venture, and his soon to be cabinet members Vice President Biden, Secretary of State Clinton, and future Secretary of State Kerry were all pro-war culprits.
In late 2011, Obama pulled a George Bush type PR stunt, and declared the Iraq war had ended, welcoming home the troops.  That news story now reads like the front page of The Onion.

Reuters Top News‏Verified account @Reuters 3m3 minutes ago
Once dubbed the 'Venice of the Middle East,' Iraq's Basra is now a showcase for the virtual absence of public services in a country plagued by turmoil, corruption and decay https://reut.rs/2G6eHe6 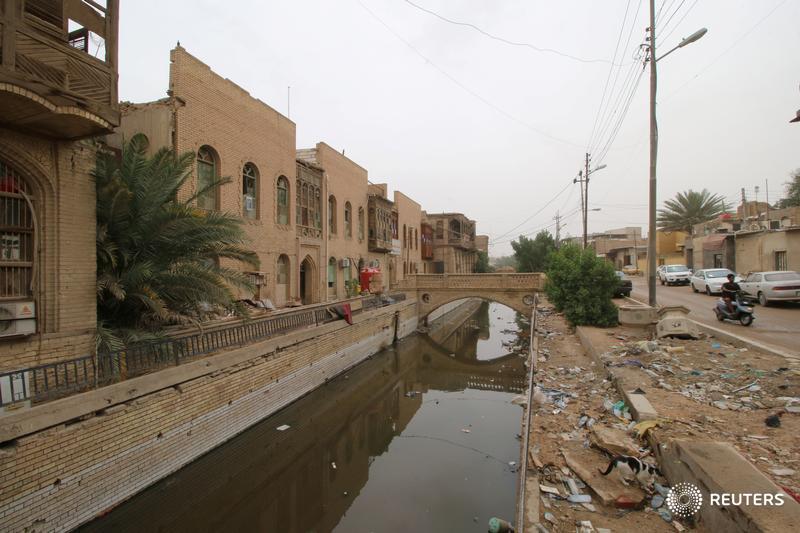 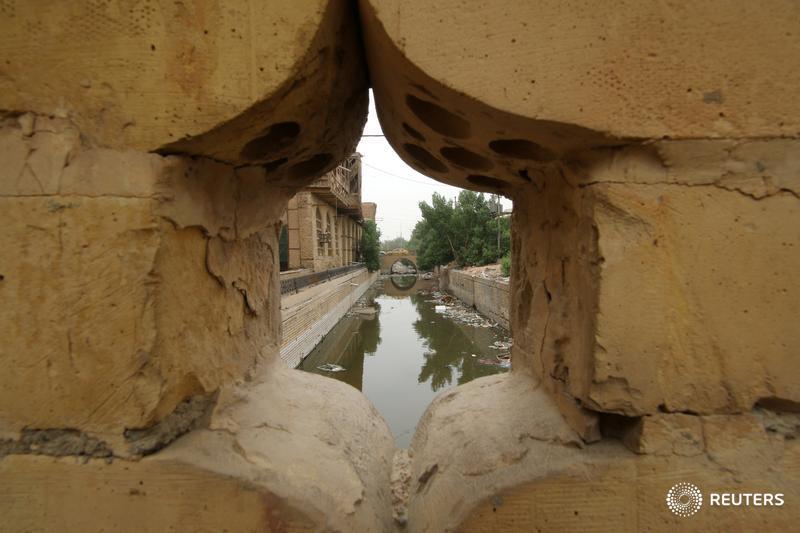 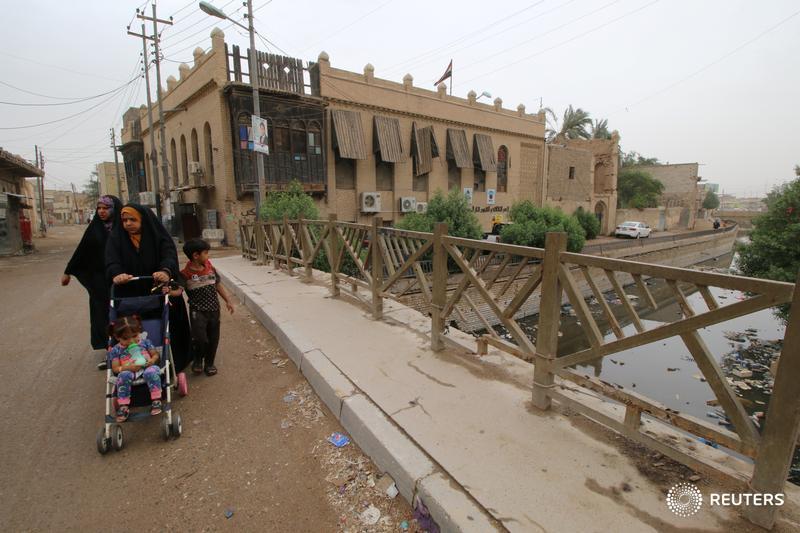 Today the cherished canal of Mohamed’s youth is a reeking, refuse-filled cesspool forcing passersby to cover their mouths.
It is a showcase for the virtual absence of public services in a country plagued by turmoil, corruption and decay since the 2003 U.S.-led invasion that toppled Saddam Hussein.
“Basra was once a wonderful place,” said Mohamed, 52, who runs a grocery shop established by his father in 1966 in a street full of traditional dwellings that are falling apart.
“But we’ve had wars and neglect,” he said, pointing to the illegible scrawl on a wooden post from the 1960s - the last time Iraqi authorities put up street signs in the city of 2.5 million people, Iraq’s second largest, just upstream from the Gulf.
Basrawis interviewed at random said they would not vote in Saturday’s parliamentary election or, even if they do, had lost faith that officials would restore their city to its old glory.


May 12th, elections are supposed to take place in Iraq.  Ali Jawad (ANADOLU AGENCY) notes, "A total of 24 million Iraqis are eligible to cast their ballots to elect members of parliament, who will in turn elect the Iraqi president and prime minister."  RUDAW adds, "Around 7,000 candidates have registered to stand in the May 12 poll, with 329 parliamentary seats up for grabs."  AFP explains that the nearly 7,000 candidates includes 2014 women.  THE SIASAT DAILY adds, of the nearly 7,000 candidates, "According to the electoral commission, only 20 percent of the candidates are newcomers." Ali Abdul-Hassan and Sinan Salaheddin (AP) report, "Iraqi women account for 57 percent of Iraq’s population of over 37 million, according to the U.N. Development Program, and despite government efforts to address gender inequality, the situation for Iraqi women has declined steadily since 2003.  According to the UNDP, one in every 10 Iraqi households is headed by a widow. In recent years, Iraqi women suffered further economic, social and political marginalization due to decades of wars, conflict, violence and sanctions."    RUDAW also notes that 60 Christian candidates are competing for the five allotted minority seats.  How do they elect the prime minister?  This comes after the general election and is based on who won seats in the election.   Abdulrahman al-Rashed (AL ARABIYA) explains, "To win the premiership, a candidate needs to win the majority of the votes, i.e. the votes of 165 MPs out of 329. Since it is a multi-party system, it is almost impossible to win these votes without sealing political alliances. The governorate of Baghdad is the most important one because it is the largest with 69 seats."  The chief issues?  Mustapha Karkouti (GULF NEWS) identifies them as follows, "Like in previous elections, the main concerns of ordinary Iraqis continue to be the lack of security and the rampant corruption."  Sunday, RUDAW explained that the electoral commission "so far fined 210 candidates for violations of commission guidelines."


As noted in the April 3rd snapshot, pollster Dr. Munqith Dagher has utilized data on likely voters and predicts that Hayder al-Abadi's Al-Nasr will win 72 seats in the Parliament, al-Fath (the militias) will get 37 seats, Sa'eroon (Moqtada al-Sadr's new grouping) will get 27 seats, Nouri al-Maliki's State of Law will get 19 seats, al-Salam will get 18 seats (KDP and PUK parties for the Kurds), Ayad Allawi's Wataniya will get 15 seats. There are others but Dagher did not predict double digits for any of the other seats. The number are similar for the group of those who are extremely likely to vote (Hayder's seats would jump from 72 to 79 seats).  Other predictions?  The Middle East Insstitute's Fanar Haddad insists to Sammy Ketz (AFP) that the post of prime minister will come down to one of three people: Hayder al-Abadi (current prime minister), Nouri al-Maliki (two time prime minister and forever thug) or Hadi al-Ameria "a leader of Hashed al-Shaabi, a paramilitary network that played a pivotal role in defeating IS. Ameri comes from Diyala province and is a statistics graduate from Baghdad University. He fled to Iran in 1980 after Saddam executed top Shiite cleric Ayatollah Mohammed Baqr al-Sadr. The 64-year old is widely viewed as Tehran's favoured candidate." 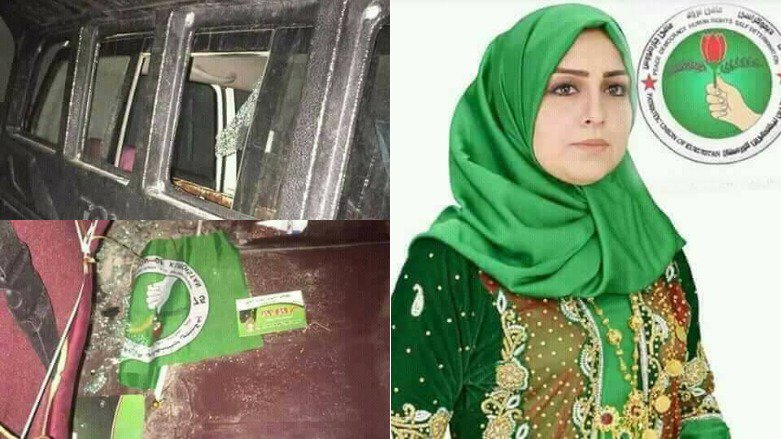 More violence is expected.  The US Embassy in Baghdad issued the following yesterday:

Those who venture out to vote on Saturday will be doing so with little information provided by their media.  Mustafa Habib (NIQASH) reports:


Some outlets claim they are independent but once the political party funding started to come in, they quickly aligned with their backers.
Presenters and reporters were quick to publish embarrassing or scandalous videos of their funders’ opponents, or criticize the opposition parties, or come up with dated government documents that supposedly showed how corrupt every other politician was. When television reporters were sent out to interview locals on the street and solicit their opinions on what was wrong with local politics and what they wanted from their representatives, only the views that fit with the funders’ policies and platforms made it to air.
The broadcast partisanship came in many other forms too - and included tactics such as only inviting guests to talk shows who would criticise the channel’s opponents, ignoring the activities of the current government and only using statements from MPs who had oppositional opinions on important subjects such as rapprochement with the Gulf states, the US presence in Iraq and privatizing the electricity sector in Iraq.
All this meant that most local journalists were covering political conflicts, rather than dissecting the actual policies of parties, which have helped voters make an informed choice.

There were several topics that almost everyone covered. Logistical issues around the elections were a favourite subject and the preparations being made by Iraq’s Independent High Electoral Commission, or IHEC, which is tasked with overseeing the elections, were outlined in depth; this included security, organisation of polling and voter registration.


That sounds a great deal like the US media covering US elections, doesn't it?  Well the US government and journalists did think they were skilled enough to teach Iraqis journalism.  As though they were infants born into a world they couldn't understand without some patronizing American telling them what a free press was?

It is just a few days before the Iraqi elections and there is a major campaign underway on Iraqi social media. But this is no election campaign. The most popular hashtags include ones that say things like: I’m not voting, boycott the elections, or stay at home. Hundreds of Iraqis changed their Facebook pictures to a logo that said, “I will not vote”.
Those who support the boycott had plenty of arguments to offer. They reminded voters about the lack of change after past elections and the laws that regulate how parties get into parliament that, boycotters say, unfairly exclude smaller parties and help to maintain the status quo.

The movement has been so noticeable that Iraqi politicians have been forced to respond. Senior Sunni Muslim politician, Salim al-Jibouri, said the elections presented a historic opportunity to put Iraq on another path after so many crises, and asked voters not to boycott the polls.
Former Iraqi prime minister, Nouri al-Maliki, who heads one major Shiite Muslim group campaigning, said that the boycott campaign was the result of external interference and was meant to mislead the public. Another Shiite Muslim leader, Muqtada al-Sadr, said that if voters boycotted the elections they would be leaving the country to the corrupt.
Some of the activists behind the online campaigns did not see it that way. One popular blogger on social media wrote about his distrust of the authorities running the elections. “All I see is privileged politicians in a time of struggle. And this war on corruption appears to target only certain sectors of society,” he complained.
“I won’t vote because I won’t legitimize thieves and murderers,” another Facebook user added.

“We decided to boycott the election because we believe it is futile,” explained Safaa Subhi, the name used by one blogger on Facebook. “There is no real chance for change and we are trapped in a black hole that was dug by the political elites; they used their power to pass laws to ensure that the bigger parties remain in government and get to continue with their corrupt ways. They don’t even give the voters a chance to remove them from power.”

The following community sites -- plus Jody Watley and THE DIANE REHM SHOW --  updated: