"My son asked me to come to Washington with him to be with him on Father's Day when he basically reached the point at which he was officially not reporting. I had some reservations about standing behind my son while he made his statement, but he's my son and of course I love him and I'm going to stand with him," said Chiroux.

The above is Robert Chiroux speaking about his son Matthis Chiroux to Taylor Barnhill for "Auburn Native Refuses to Return to Iraq" (WTVM) and more on Matthis can be found at Iraq Veterans Against the war and IVAW's Kris Goldsmith writes about Matthis here. IVAW also notes the following:

James was injured in Baghdad when his humvee was caught in an IED explosion. Along with the physical wounds from this attack, James suffers from PTSD as a result of his combat missions, which included providing cover fire for "bait and kill" teams.

After being diagnosed with PTSD and possible traumatic brain injury, James went AWOL, moving to Canada rather than face another deployment. In March of 2008, he decided to return to the US and turned himself in to the Army at Fort Knox.

Last week the Army decided to charge PCF James Burmeister with desertion. James will face a Special Court-Martial, a bad conduct discharge (which would prohibit him from having access to any medical benefits or otherwise for the rest of his life), and up to 12 months of prison. The date of James' court martial is expected to be set next week.

Because Fort Knox is an armor training school with soldiers firing from tanks day and night, James can hear the sounds of gunfire from his room as he awaits his fate, worsening his PTSD.

Here's how you can help:

Last week Helen Burmeister and others gathered to speak out in support of James. This was noted yesterday but added late so, again, here's the video of that rally:


His mother explains on the video:

I'm Helen Burmeister and I'm here today to support my son Prviate 1st Class James Burmeister. My son is an Iraq War veteran and I'm very proud of him today. He fought bravely in Iraq. He followed orders. He was wounded in a roadside bomb and he's been diagnosed with PTSD and a possible brain injury. Our request today is that the army release James. We want James to be able to put this traumatic experience behind him so he can begin to heal -- both emotionally and physically. I believe my son has done his part. Now it's time for him to be given the recognition he deserves. Short of that, we are requesting that he be allowed to go home to Oregon. And thank you. Thank you to everyone for all your support today.


Meanwhile, in election news a development. No, not Bernard White's nonsense on WBAI this morning. Rachel and Jonah were the first to e-mail complaining about that. "Obama" was not a song, was not art and only led to worse from Bernard that, considering what he did on air and his position at the station, would be of great interest to the FEC. If Bernard wants to do commercials for Barack, he should have taken his ass out of the WBAI studio. It's exactly that sort of nonsense that got Bernard canned before. He got very lucky that, instead of throwing out the trash bit-by-bit, Pacifica attempted to throw it out all at once -- thereby creating a 'mini' story. When the axe falls again, a lot of people who begged for public support and got it will beg again and find that they have no sympathy -- they've destroyed it.

Bernard's actions today are perfectly in keeping with why he was pushed out the door before. Don't worry, he's going out the door again. He's too stupid to have learned his lesson. (He's also incompetent on air. Never prepared, never organized. And cracking 'jokes' when leading into serious programming. He has no clue.) But Pacifica's need to run a radio station and not Bernard's Little Corner of the World wasn't our topic. Ralph Nader and Matt Gonzalez are on the ballot in Illinois. AP reports that they turned in over "50,000 signatures" yesterday.

Nader to discuss presidential run
Consumer advocate Ralph Nader is scheduled to speak at the University of Hawaii next month to rally support for his 2008 presidential bid.
Nader, who is running as an independent, is scheduled to speak at 8 p.m. July 3 at the Art Building Auditorium, 2535 McCarthy Mall.
Organizers are asking for contributions of $10, or $5 for students.
For more information, call (202) 471-5833 or e-mail: events@votenader.org

And Ellis notes this from Team Nader: 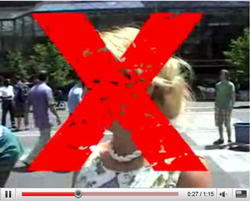 Which Presidential candidate would eliminate the billions of dollars in corporate welfare we pay every year to the ethanol industry?

Wrong. (According to today's New York Times, Obama actually has very close ties to corn ethanol industry - an industry that Ralph Nader has called "a multifaceted monstrosity radiating damage in all directions of the compass.")

Many people still consider Obama the progressive candidate in the race.

Who's the progressive in the race?

To drive home the point, today we launch The Nader Challenge.

Check out the video here.

With your ongoing and generous help, we're destined to make a splash in November.

Together, we are making a difference.

james burmeister
Posted by Common Ills at 5:57 AM