Tuesday, June 21, 2016.  Chaos and violence continue, Falluja's still not 'liberated,' Sunnis continue to be persecuted, the White House continues to avoid attempting a political solution, and much more.


Strikes in Iraq
Rocket artillery and bomber, attack, ground-attack, fighter and remotely piloted aircraft conducted 20 strikes in Iraq, coordinated with and in support of the Iraqi government:


And at the Pentagon today, Pentagon press secretary Peter Cook gave an update on Iraq:


In Fallujah, Iraqi Security Forces, led by the Counter Terrorism Service continue to make progress.  About a third of the city has been cleared of ISIL forces, and Iraqi forces continue to advance at a rate of about five to 10 percent of the city per day, being careful to safeguard the lives of civilians and limit property damage to the extent possible.
We continue to provide coalition air support; there have now been 85 strikes over the last four weeks, four in the last 24 hours.  We are flying strike missions every day in the fight for Fallujah.
In the north, the Iraqi push towards Qayyarah from multiple axes also continues to make progress.  Iraqi forces moving north from Baiji advanced another six kilometers today, overcoming ISIL defenses along the way.
Meanwhile, Iraqi forces moving from the east also continue their push.  We are, again, providing significant coalition air support for these efforts as well.


Which is a happy way to spin.  AP's a little more blunt as they quote Col Christopher Garver in Baghdad explaining that the 'liberation' of Falluja proclaimed last week hasn't really taken place yet:


Only a third of Fallujah has been “cleared” of Islamic State militants, the U.S.-led coalition said Tuesday, days after the Iraqi government declared victory in the city west of Baghdad, which was held by the extremists for more than two years.


Fighting continues despite the fact that, as Pakistan's THE NEWS INTERNATIONAL notes, "Prime Minister Haider al-Abadi declared victory last week after the national flag was raised above the main government compound."

And not only does the fighting continue, so does the civilians fleeing Falluja.  Nick Clark (Great Britain's SOCIALIST WORKER) reports:


Thousands of people are fleeing the Iraqi city of Fallujah despite claims by the Iraqi government to have liberated it from Isis last Friday.
Around 30,000 people were reported to have fled the city last week. The United Nations believes over 80,000 people have left in recent weeks, with refugee camps struggling to cope.
The city was captured by Isis in 2014. Iraqi forces, backed by US and Australian air power, have been waging an assault on Fallujah for several weeks.
The army is still bombarding the city relentlessly despite the tens of thousands of civilians still trapped there.
Karl Schembri of the Norwegian Refugee Council, which runs refugee camps in the area, said, “This comes after months of besiegement.
“They have been eating rotten dates and animal feed.”
A report by Human Rights Watch earlier this month said there were “credible allegations” of abuses by Iraqi forces during the fighting.
These include allegations of summary executions, beatings, disappearances and mutilation of corpses.
A number of people fleeing the city also claim to have been tortured by militias backed by the Iraqi government.
One of them, Abu Muhammad, said, “They would beat us with water pipes. They would take turns to torture us. My hands were tied behind my back, and one of the militants sat on my chest after he got tired of beating me.

“He just threw himself on me. I felt my ribs breaking. I screamed in pain. I spat blood. I asked for water, but I was denied even that.”

Payments © Socialist Worker (unless otherwise stated). You may republish if you include an active link to the original.

We heard Sunni civilians fleeing the fighting bitterly complain their homes had been targeted by Shia militia helping the Iraqi security forces surround the city.
There is evidence too that men of fighting age have been abused and tortured by some of those same Shia militia.
Aware of the danger of a widening sectarian gulf in taking the city, the US-led coalition has consistently warned the Iraqi government it will withdraw its military support if those Shia forces enter the city itself.
The fighting has already left much of Falluja in ruins and tens of thousands of its citizens displaced.
If the Iraqi government wants to return order, it will have to show quickly it is making efforts to rebuild.
Without homes, hospitals and schools, there will be plenty of lingering resentment.
Any so-called "victory" will be hollow without a dividend for peace.


Iraq desperately needs to relearn the lessons from that era to win its war against the Islamic State. Today, Ramadi lies in ruins after a combination of Iraqi forces supported by U.S. airpower, some Sunni tribal fighters, and Shiite Popular Mobilization Forces wrested it from Islamic State control. The city of 400,000 people was destroyed in order to liberate it — and now Fallujah faces a similar fate, as Iraqi forces pushed farther into the city over the weekend. The limited reporting coming out of the area tells a story of atrocities against civilians from both the Islamic State and Shiite militias.

He goes on to cite three lessons learned when he was fighting in Ramadi.

The first one?  "Killing off terrorist leaders is only a short-term fix."


And it doesn't address the reason the Islamic State got a foothold in Iraq to begin with.


These latest outrages from incoming al-Hashd al-Shaabi fighters will only fuel the belief among Sunnis that they are best served by Sunni administrations – however brutal.
Islamic State has repeatedly invoked the vulnerability of the Sunnis across the Levant to justify its violence. This is the constituency in whose name it claims to act and whose interests it claims to defend.
Shortly after IS first captured Mosul, in June 2014, the group released a video, aimed at Iraqi Sunnis, explaining how both the West and Iraqi Shias had conspired against them in 2003. The result had been a decline in Sunni fortunes and increased insecurity as Shia death squads sought revenge after decades of repression and abuse.
This resonated strongly with Sunnis such as the Albu Mahal and al-Qa’im tribes, which had supported the US-led “awakening”, a military strategy initiated in 2005 to encourage Sunni Iraqi tribes to fight against the insurgency initiated by al-Qaeda. IS captured the heads of those tribes and forgave them for fighting alongside the West against al-Qaeda in Iraq. We are not accustomed to seeing videos of IS pardoning captives, but this was as careful and calculated as any of its ultra-violent theatre. The exercise was designed to project the group as a bastion of Sunni honour and security.


That is the story behind so much of IS’s strength today: the fears of the vulnerable Sunni poor over whom militants govern. Remove that constituency, and the group would collapse. But the Obama administration has done little to allay Sunni fears. Rather, it has exacerbated them by launching air strikes against IS targets in Fallujah, fuelling a perception that it is working hand-in-glove with Shia militias loyal to Iran. 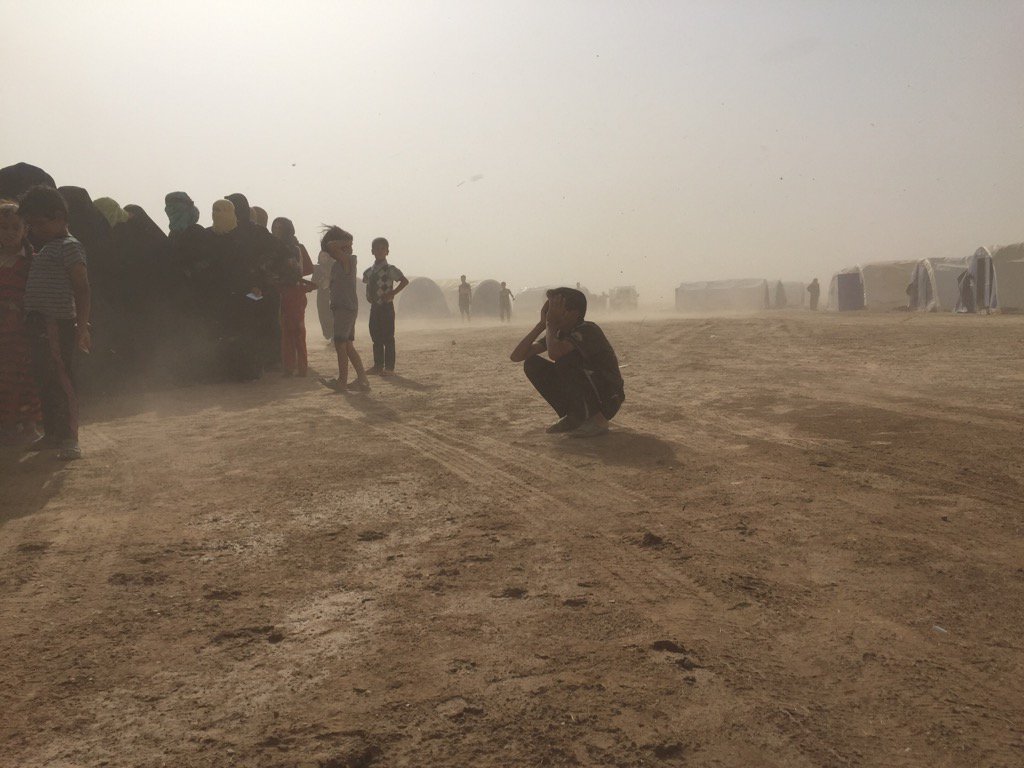 Didn't have to be that way.

People could have planned.

They could have worked on a political solution.

US President Barack Obama did.

But then in August, he began the daily bombings of Iraq and never remembered it again.

John Kerry couldn't help -- he was too busy posing as the Secretary of Defense to do the job he was paid to do: Secretary of State. 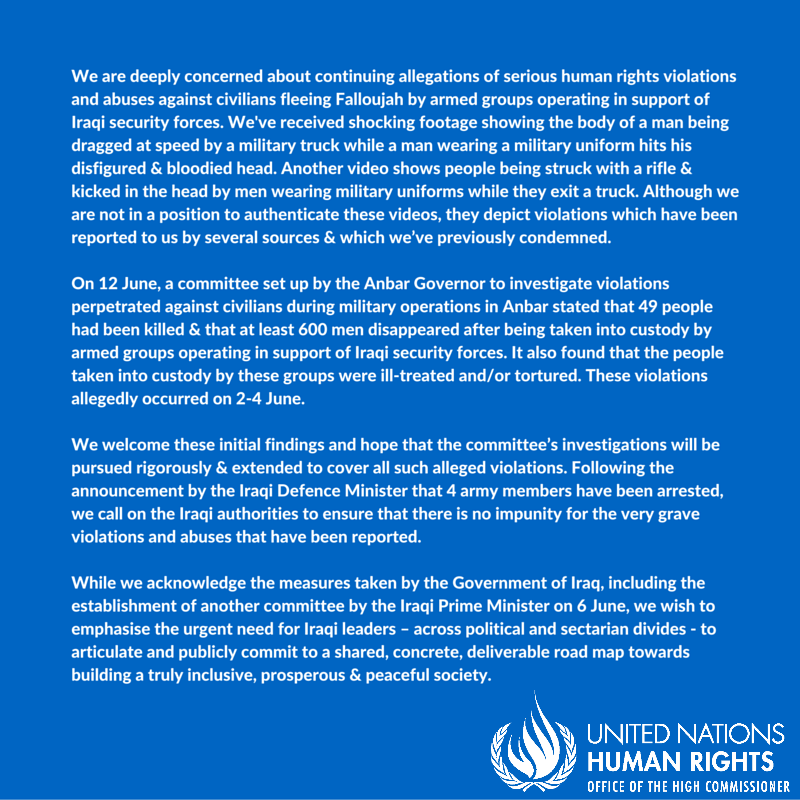 
Despite priding itself on freedom from the sectarianism that has plagued militias such as Badr, the ICTS seems to be maintaining a strategic, suspicious relationship with the Hashd.
On June 17, The Daily Beast witnessed Hadi al-Amiri, leader of Badr, meeting with Abdulwahab al-Saadi, leader of the operation to retake Fallujah. Several other leaders from the ICTS also were present.
Earlier that day, al-Saadi had criticized the Hashd, telling The Daily Beast, “The civilians see the Hashd as militiamen who can’t be controlled,” yet one of al-Amiri’s bodyguards asserted that the two men meet about three times a month. The ICTS blocked The Daily Beast and other journalists from the meeting.
The overt cooperation between Badr, a sectarian militia, and the ICTS, the one branch of the Armed Forces that has avoided sectarianism, will further divide Sunnis from the Iraqi government.
Even the Shia militias in the northern suburbs have tarnished the Iraqi government’s attempts at a nonsectarian campaign in Fallujah.


Omran Wali, another Kataib Hezbollah commander in al-Saqlawiyah, claimed, “We have been welcoming the civilians and treating them very well, bringing them to the camps for internally displaced people.” But an official investigation revealed that Shia militias have killed 49 civilians in the northern suburbs, and another 643 are missing. Iraqis are discussing rumors that the militias executed those missing in retaliation for an ISIS massacre at Camp Speicher near Tikrit in 2014.


Again, no real victory.  But the White House will throw bombs at Iraq.

And now some more money.

That's US State Dept press spokesperson John Kirby at today's press briefing explaining the money the US is giving:


Speaking of those displaced by conflict, in light of recent events in Iraq and in response to the UN high commissioner for refugees’ recent appeals for emergency needs in Fallujah, the United States is today announcing an additional $20 million in humanitarian aid to UNHCR’s Iraq response. This will be part of a larger package of humanitarian assistance that will be announced later this year. So there’s more aid coming, and I would note that more than 3.3 million Iraqis have been internally displaced since 2014. More are expected to flee in the coming days and weeks. And we’ve seen this, as I said, in Fallujah specifically.
In fact, the UN estimates that about 85,000 people have already fled Fallujah. Yesterday we talked about upwards of 80,000. The UN estimate now is 85,000. The UNHCR has identified camp coordination and camp management as well as protection as its – as its most urgent priorities in the Fallujah response. Other immediate needs include water and sanitation, shelter, and food. Humanitarian agencies are responding to the crisis, but more funding is urgently needed, and we urge other governments to contribute generously to the UN’s Iraq appeals as we have done.

Turning to some of today's other violence . . .

In addition, AL BAWABA reports, "At least five Shia militiamen were killed and dozens injured Tuesday by a suicide bombing in northern Iraq, according to an Iraqi police officer."