Anyone else raising an eyebrow over that?

THE NEW YORK TIMES is reporting on the UK returning looted items to Iraq.

Home to the Hobby Lobby of Journalists herself?


When will the paper of no record report that the documents Rukmini Callimachi stole from Iraq will be returned?

The ones the Iraqi government has demanded she return?

The ones that, per international law, she stole.

Anyone else want to read that TIMES article now?

America is an oil company with an Army ... ask our victims in Yemen, Syria, Libya, Iraq, Afghanistan, ... and all our future victims US conscience-challenged citizens don't give a crap about. 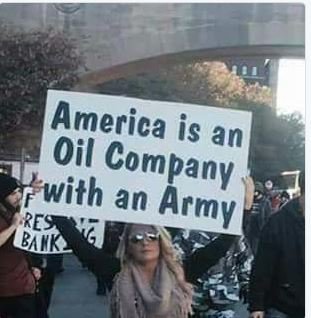 Libby can say it, why can't THE TIMES?

Because Libby wants to tell the truth and THE TIMES wants to repeat lies.

Iraq developments moving quickly as results for elections confirmed - Haider AlAbadi fighting for his political life,from protests in the south to KRG opposition to clash with Tehran over sanctions compliance.Many from his own party working for his downfall simply 2take his place
1 reply3 retweets1 like