Basil Adas' "US ready to discuss immunity clause, Iraqi lawmaker says" (Gulf News) covers the continued efforts to of the White House and the puppet government in Baghdad to push through a treaty (circumventing the US Senate and the US Consitution, though the Iraqi Parliament will supposedly be able to give a thumbs up or thumbs down)masquerading as a SOFA. Adas reports that the issue of the immunity of US troops is something the US now signals they're willing to discuss according to the Kurdistan Alliance's Feriad Rawanduz who is hopeful that a treaty can be pushed through before the end of the year. Abdul Aziz al Hakim tells Adas that possibly their could be a judicial body comprised of both Iraqis and Americans who would rule on the actions of individual US service members. Ryan Crocker, US Ambassador to Iraq, is optimistic and claims the 'movement' is some sort of rebuke to Iran (from Iraq).

Adas says the path after a treaty is drawn up is the Executive Board, then the National Security Council and the Iraqi Parliament. Finally, Adas notes: "Meanwhile, Defence Minister Abdul Qader Jasem Mohammad confirmed yesterday that Washington had offered a number of Beechcraft spy planes to bolster the Iraqi security forces."

The US began a heavy diplomatic push last week. John Daniszewski interviews Crocker for the AP, "US ambassador appeals for patience in Iraq," in which Crocker attempts to portray Iran as the culprit for the lack of a treaty called a SOFA so far:


"If we decide we are tired of it, if we decide we don't want to do it anymore and that it is time to turn our attention to other things, this could all go the other way," Crocker warned. "And it is certainly my sense as someone who has served in the Middle East for the better part of three decades, that you would pay a major long-term price."
He suggested it could be seen as a repeat of the U.S. withdrawal from Lebanon in the early 1980s, a move that led countries like Iran and Syria to draw assumptions about U.S. lack of resolve and to embrace an attitude of defiance. "These kinds of actions have profound and very far-reaching consequences," he said.
The talks on the military pact have hit an impasse recently over U.S. insistence on retaining sole legal jurisdiction over American troops and differences over a schedule for the departure of the U.S. military. Iraqi officials have said that they want all foreign troops out by the end of 2011.
Crocker, 59, who became ambassador in March 2007 and who is expected to leave his post around the end of the Bush administration, is one of the most experienced diplomats in the Middle East. He has served as ambassador in Lebanon, Syria and Kuwait, and was ambassador to Pakistan before his appointment to Iraq.
He said it is becoming obvious that Iran wants the current negotiations to fail.

Today on Democracy Now! (about to start airing), the second segment of the US House Rep Dennis Kucinich interview will find Kucinich revealing that Barack Obama didn't want bankruptcy provisions in the bill to address the economic meltdown. Kucinich says he was told that by a caucus member. Otherwise Democracy Now! is pure Cult of St. Barack, as usual. There are no reps from the campaigns of Ralph Nader, Cynthia McKinney, Bob Barr, Chuck Baldwin or John McCain, nor any supporters of them. Most surprising is the issue of McCain due to the fact Amy Goodman is yet again going after a Barack opponent day after day and never providing them with a means to speak. She did that with Hillary's campaign during the primaries. That's not 'news' and it's not 'public affairs.' It is one-side propaganda. The New York Times' Adam Cohen shows up to push Barack yet again but what else does anyone expect from that paper? And Goody gets in snark at Governor Sarah Palin (McCain's running mate). Asked if she would be willing to go into Pakistan, Palin issues a qualifier (an "If . . . then" statement) and follows the qualifier with "absolutely." Goody renders it as "absolutely" and listen to the self-amused snark in Goody's voice following the playing of the clip. [Jim adding a note to C.I.'s entry: Kucinich's statements come 27 minutes into the program.]


Isaiah's The World Today Just Nuts "Boys Do Cry" went up this morning as did Kat's latest CD review, "Kat's Korner: Chris Martin's cold play." Kat's next review goes up after this and I'm grabbing a photo from Wikipedia because I don't have the time to scan the cover this morning. I'll replace it with a scan later in the week.

This is from Team Nader: 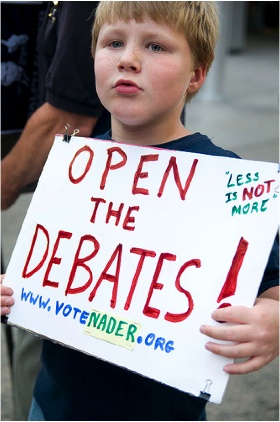 Trevor Lyman is the man who organized the Ron Paul money bombs.

One Lyman money bomb raised $4 million in one day.

Another raised $6 million in one day.

Now, Lyman is at it again.

Lyman was inspired by Ron Paul's press conference a couple of weeks ago.

At that press conference, Paul called on his followers to ditch the two major parties and throw their support to one of the independent or third party candidates.

So, we all need to support Lyman's push for an alternative debate now.

If Lyman gets 10,000 pledges by October 8, he and the other sponsors will organize a debate in New York City.

All major candidates -- Nader, Barr, McKinney, Baldwin, Obama and McCain will be invited.

Already, with no publicity, Lyman has close to 1,000 pledgers.

So go to thirdpartyticket.com now.

You don't have to say how much you are pledging.

So, let's get behind Trevor Lyman's push now.

Let's crank it up.

And get it done.

Third partyticket.com is being sponsored by Lyman's group breakthematrix.com, the Chicago-based Free and Equal Elections, and Open Debates.

On debates, Lauren notes this from Team Nader: 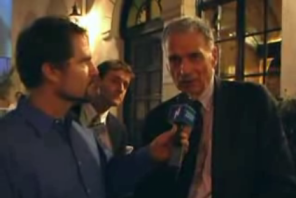 Always ask after you watch a debate, not who won, but what lost and what won.

You ought to ask what they don't talk about, what they ignore, what they avoid. Both of these candidates are vying to get into the White House so they can take orders from their corporate paymasters.

That's what it's all about. Corporate government or the people’s government? That's why we're running: to make a people's government.

When you ask what won you get a clear view that these two candidates are really afraid of challenging corporate power. It's our job to make them more afraid of the people than big business.


Watch a video of the statement at http://www.youtube.com/watch?v=1WS5Yhy_ySk