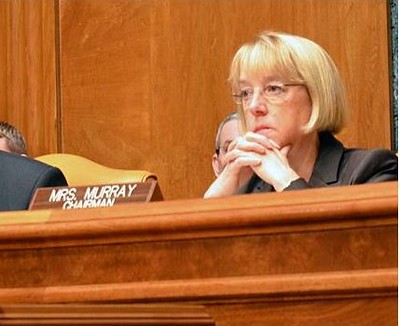 (Washington, D.C.) – Ahead of the Senate floor vote yesterday on the nomination of Steven Menashi to serve as United States Circuit Judge of the U.S. Court of Appeals for the Second Circuit, U.S. Senator Patty Murray (D-WA), the top Democrat on the Senate education committee, spoke on the Senate floor to condemn Mr. Menashi’s history of bigoted remarks and his recently-reported record of helping orchestrate Secretary Betsy DeVos’s illegal plans to deny debt relief to student borrowers, including students in Washington state. Senator Murray voted against Mr. Menashi’s nomination, but he was confirmed by the Senate to the U.S. Court of Appeals by a vote of 51-41.
In her remarks, Senator Murray highlighted that Mr. Menashi is “uniquely unfit to serve a lifetime appointment on a federal court” and urged her Republican colleagues not to rubberstamp another one of President Trump’s partisan, ideologically-driven judicial nominees. The speech was Senator Murray’s most recent step in her consistent opposition to Mr. Menashi’s nomination, decrying him as unfit for the federal bench in a speech from the Senate floor last week, and leading oversight efforts into Mr. Menashi’s role in the Department of Education’s plan to undermine protections for student borrowers.

“I’ve come here before to call out Senate Republicans and their unwavering support for President Trump’s efforts to pack our courts with partisan, ideologically-driven picks. But the nominee I am speaking out against today is truly uniquely unfit to serve a lifetime appointment on a federal court – Steven Menashi.”
“Mr. Menashi has a deeply disturbing history of disparaging comments against women, communities of color, immigrants, and the LGBTQIA+ community. He unabashedly helped roll back protections for vulnerable communities.”
“He defiantly refused to answer basic questions from U.S. Senators—both Democrats and Republicans—about the policies he worked on while advising the President. He has time and time again put extremism and ideology ahead of the rule of law and he has proven himself incapable of serving as a fair and impartial judge.”
“And as if his record of extremism and partisanship wasn’t bad enough, we now know that Steven Menashi not only helped – but was a key architect—in Secretary DeVos’ efforts to illegally deny relief to student borrowers who were cheated by predatory for-profit colleges.”
“These policies—that Mr. Menashi provided “legal advice” for—were subsequently ruled to be violation of federal law. Secretary DeVos’ policy on borrower defense led to her being held in contempt of court.”
“Whether Mr. Menashi did not understand federal law, or whether he advised the Secretary of Education to blatantly ignore it at the expense of students the fact is—this latest revelation undoubtedly and unequivocally disqualifies Mr. Menashi from serving a lifetime appointment on a federal court. Or at least it should.”
“Mr. President, today the Senate will take a critical vote. This is a vote on whether the Senate once again rubberstamps President Trump’s unprecedented efforts to remake the federal judiciary on a partisan, ideological basis.”
“It’s a vote that show whether Republicans are willing to support a judicial nominee whose actions have been found to violate the law as recently as a few weeks ago. I implore my Republican colleagues to consider not just Mr. Menashi’s record of bigotry and the harm he helped cause to cheated and defrauded students, but also his blatant disregard for the rule of law.”
“When casting their vote today, I ask my colleagues not to worry about what the President might say on Twitter, but to worry about the rule of law and to worry about the idea of yet another partisan nominee getting a lifetime on the federal bench who doesn’t. It’s really that simple.”