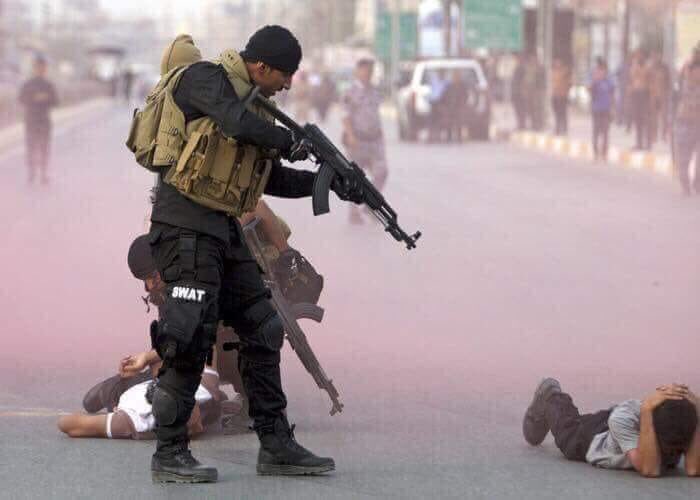 It took her forever but Goody Whore finally found Iraq.  It wasn't worthy of a segment to DEMOCRACY NOW but it did make it into headlines:

In southern Iraq, massive protests are continuing, denouncing the lack of access to electricity, clean water and jobs in the oil-rich region. Police have cracked down on the mounting protests, firing live ammunition into the crowds. At least eight people have been killed. While Iraq’s oil sector accounts for 99 percent of the country’s exports, it represents only 1 percent of Iraq’s jobs, as the vast majority of the positions are held by foreigners.

Of course, it's not just in southern Iraq.  As noted in yesterday's snapshot, it's also in Baghdad.  In fact, for reality, let's go to Patrick Martin's "US-backed Iraqi government guns down protesting workers" (WSWS):


More than a dozen working-class protesters have been shot and killed by police, Special Forces and pro-government militias across south and central Iraq over the past week, amid a widening popular upsurge against the US-backed government of Prime Minister Haider al-Abadi.
The driving force of this movement is anger that seven years after the official withdrawal of the US military forces that invaded, occupied and devastated the country, conditions of life remain intolerable and the government has failed to deliver on its promises to use the country’s oil wealth to benefit the people, rather than multinational oil companies and a corrupt stratum of Iraqi collaborators with US imperialism.
Since the killing of a demonstrator in Basra on July 8, six more people have been killed in the city, Iraq’s third largest and the center of its oil industry. Other deaths have been reported at the hands of security forces in the cities of Amara, Samawa and Muthanna, as well as mass shootings in Nasariya and Karbala. The casualty toll reported by international news services has reached 14 dead and 366 injured.

Hundreds have been arrested as the government seeks to crush the mass protests before the movement becomes so widespread that it cannot be contained. In the first week alone, protests localized to Basra and al-Muthanna provinces in the far south spread throughout the entire south, where the majority of Iraq’s people live, and into Baghdad, Diyala and Salahuddin provinces in the center of the country.

The Iraqi government is attacking civilains, wounding and killing protesters.

عــطـ✿ـر༄ 🇮🇶‏ @S___A_22 7h7 hours ago
Hello world there’s is people making revolution now, in Iraq please support and help them to spread the news because the government cut out the internet from all iraq #Save_the_Iraqi_people


A functioning US media would be noting this:

Per the Leahy Amendment, all assistance -- military, financial, diplomatic -- should be immediately pulled.

Sara.abdullah‏ @Saraabdullahiq
So very shameful, that we are now in 2018 and people here don’t have the right to demonstrate for their rights! The government had cut the net for the last two days so the people won’t have access to net and won’t do their demonstrations!! I’m speechless! #IraqProtests #Iraq
3:01 AM - 16 Jul 2018
5 replies33 retweets69 likes

Steven nabil‏Verified account @thestevennabil 6h6 hours ago
A picture of a 70+ protester being met with a water pipe gun has sparked outrage in the Iraqi social media. This is not the iraq they envision post dictatorship in 2003.

Eveet Ewaz‏ @EwazEveet 13h13 hours ago
Dear @hrw I hope you’ve seen what’s happening in #iraq nowadays.. There is No Rights, Humanity, and no one is watching.. #IraqProtests #Save_the_Iraqi_peop #save_iraqi_people #Iraq @hrw

anwer khudhayer‏ @anwer_khudhayer 14h14 hours ago
Save Iraq from this injustice and from the oppression, killing and torture of citizens kill us because we have demanded our natural right to live 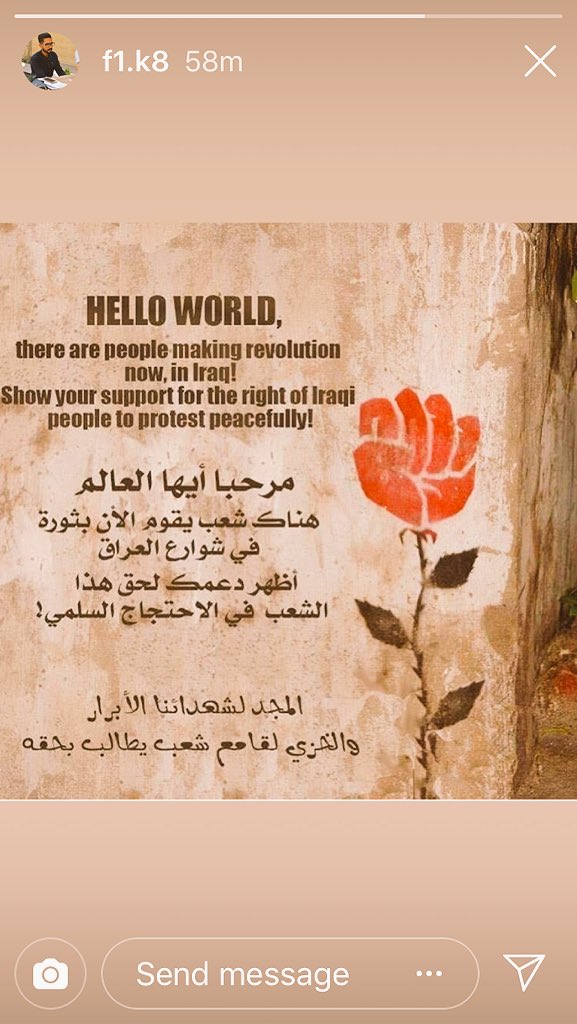 FRB-I‏ @FRBIU 10h10 hours ago
In #Iraq protests against the government and #political system have continued to grow. Iraqis took to the street in #Diwaniyah to voice their anger #failedstate pic.twitter.com/ORbpZR2W4r
0:45
413 views
1 reply17 retweets8 likes
Show this thread


It's amazing that the Iraqi government is attacking the Iraqi people and the most we can hope for is a headline on DEMOCRACY NOW.

Walid Phares‏Verified account @WalidPhares 4h4 hours ago
Iraq pro Iran militias, unleashed against Shia and Sunni demonstrators protesting Islamist parties corruption and lack of electricity and jobs in central and southern Iraq. While Washington is overwhelmed by its political saga.

NPR continues their coverage of the Iraq protest.

Jane Arraf also has a text report for NPR which includes:


The demonstrations also spread to the holy city of Najaf, south of Baghdad. Iraq's most revered Shiite cleric, Ayatollah Ali al-Sistani, appeared to give the protesters a green light in a message delivered Friday. The normally reclusive religious leader said they deserved sympathy for their demands and noted that the majority of militia fighters who died fighting ISIS were from the south of Iraq.

Abadi responded to the unrest by deploying soldiers and counter-terrorism forces to protect oil installations and government buildings. Security forces used water cannons and fired live ammunition in the air to try to disperse the demonstrators.


While the US largely ignores Iraq, the UN mission in Iraq (UNAMI) issued the following:


Baghdad, 17 July 2018 - Following the demonstrations over the lack of services, job opportunities and to demand improved living conditions, the Special Representative of the United Nations Secretary-General (SRSG) for Iraq, Mr. Ján Kubiš, urges the government to fully respect and address the people’s legitimate concerns.

He calls on the political actors to ensure that the next administration prioritizes good governance, reforms and the fight against corruption that will enable economic development and progress, job creation and delivery of critical public services.

At the same time, the Special Representative is deeply concerned about violence as well as acts of vandalism which accompanied some of the otherwise largely peaceful public protests. He regrets the loss of life and numerous injuries on the side of both protestors and security forces and the destruction of public and private property including offices of government institutions and political parties as well as oil and public infrastructure. Such developments, if continuing, would have a harmful impact on the security and economic situations throughout the country.
Mr. Kubiš underscores the inalienable right of the people to freedom of expression, including to partake in peaceful demonstrations without fear and intimidation or arbitrary detentions while abiding by the law, and to have unfettered access to information. It is the duty of the authorities to enable such lawful demonstrations and to protect their participants. While maintaining law and order the security forces must exercise restraint and avoid use of excessive disproportionate, lethal force. He also warns against allowing intruders and opportunists to exploit the otherwise legitimate demonstrations for their political purposes, to trigger disturbances.
Iraq has just started recovering from the destruction caused by the terrorist Dae’sh while still fighting its remnants and sleeper cells. The people of Iraq badly need sustainable, long-term stability that can only be achieved by all actors coming together to find solutions to some of the country’s persistent problems that i.a. repeatedly prompted the recent and previous protests. Following the 12 May general elections and after the early conclusion of the recount of fraudulent and suspicious ballots and official certification of the election results, it is imperative to expeditiously install a new inclusive and pro-reform patriotic government that will put the rich resources of the country at the disposal and for the benefit of its own people. Such a government will be able to deliver on the people’s demands and answer their aspirations of boosting economic performance, creating jobs, improving services, fighting corruption and instilling hope of decent and dignified life for the youth, for all Iraqis.
****************
For more information, please contact: Mr. Samir Ghattas, Director of Public Information/Spokesperson
United Nations Assistance Mission for Iraq, Phone: +9647901931281, Email: ghattass@un.org
or the UNAMI Public Information Office: unami-information@un.org


We call on the Iraqi authorities to respect the right to freedom of expression and peaceful assembly without threats, intimidation, or arbitrary detention. We also call on all political actors to cooperate constructively in finalizing the ongoing electoral recount process with a view to the swift establishment of a new government that will address the people's legitimate aspirations for tangible reforms, that (will) improve the daily lives of all Iraqis.

David Romano (RUDAW) argues, "These people’s frustrations, if not addressed, could turn into a more potent enemy of the regime in Baghdad than even ISIS. Just like when it comes to Sunni Arab areas newly liberated from ISIS and in Kurdish areas recently coerced away from any moves towards independence, the government in Baghdad has a limited window of opportunity to address problems. If Baghdad fails to give Sunnis and Kurds their promised shares of governing power and wealth, if it goes on pumping oil from places like Basra and Kirkuk while the people there continue to live in poverty, the next big Iraqi crisis will not be long in coming. The past week’s protests in the south are simply a warning that people’s patience – whether they be Shia, Sunni, Kurdish or other – has limits."  And he's probably right.

On the topic of ISIS, Liz Sly and Mustafa Salim (WASHINGTON POST) report:


The Islamic State is creeping back into parts of central Iraq just seven months after the government declared victory in the war against the group, embarking on a wave of kidnappings, assassinations and bombings that have raised fears that a new cycle of insurgency is starting again.


The small-scale attacks are taking place mostly in remote areas that have been neglected by the government and are chillingly reminiscent of the kind of tactics that characterized the Islamic State insurgency in the years before 2014, when the group captured a vast swath of territory across Iraq and Syria.


I disagree with that.

I don't believe they're creeping back.  As we've noted repeatedly, the Islamic State never left.

They've continued their attacks all along.

I understand what Sly and Salim are talking about.  But they accepted -- and this was true of the 'west' in coverage and analysis -- a false premise.

Liberating or 'liberating' Mosul did not mean the end of ISIS.

The Islamic State is a terrorist group.  That they managed to occupy cities in Iraq -- and they still have strongholds -- was a new thing.  It is not the object or goal of terrorism.  It was a deviation, not a norm.

And when the deviation was discontinued, the west saw that as success.

It wasn't success.  The goal of the Islamic State is terrorism.  Whether they occupy and area or not,m their goal is and remains terrorism.  By refusing to grasp this reality, the west thought a victory had taken place when it had not.

The following community sites -- plus the ACLU and PACIFICA EVENING NEWS -- updated: