Seymour Hersh is an investigative reporter whose work is legendary.  His byline is attached to important news stories from the 20th century and the 21st century.  His legend will endure. 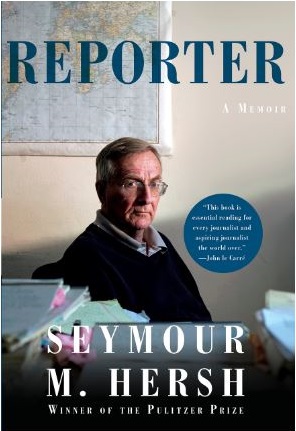 At one point, he explains that he was ticked about the delay on a piece he'd written about the mafia which required extensive editing and rewriting -- he writes the issue is mainly the first three paragraphs -- and he and A.M. Rosenthal (editor at THE NEW YORK TIMES) are exchanging back and forth memos.  Rosenthal writes:

Speaking of memos: It should interest you to note that at this moment a good part of THE NEW YORK TIMES has come to a standstill because the deputy managing editor, one assistant managing editor, one acting national editor and one assistant national editor are tied up as they have been all day, and for days past, in trying to get your series into printable form.  It seems to me that if I were a reporter whose work needed that much attention, I would be slightly embarrassed and hugely grateful.


Reading REPORTER, it's obvious that not a lot has changed.

If someone termed the book "unreadable," that could pass as a kind review.

In fact, "slop" may be too generous a term.  That Knof published this does not speak well for them.


Hersh writes of events, whether distant past (Vietnam) or more recent present, without providing the backstory.  Is he Cary Grant?  Does he not do recap?  He certainly seems to think he's a star -- even writing of himself in third person (for example, the top of page 233).

Hersh's strong sense of self-love is not a surprise to anyone who knows him and, yes, I know him.  In Wednesday's snapshot, I noted he was under attack and that I'd try to review the book over the next few days.  I was hoping this would be a rave.  But then I read the book.

His writing of Eugene McCarthy's campaign is probably the strongest section of the book.  It comes alive and McCarthy's such a minor (and disgusting) character that it probably doesn't matter that most people today have never heard of him -- the campaign is the point, not the person.  That's a detail that Hersh gets across repeatedly noting McCarthy's disdain for his college supporters.  Hersh's distaste for the Kennedys is well known and, when reading his swipes at RFK as a candidate in 1968, a reader should keep that in mind.  Shirley MacLaine is a far better source on RFK's campaign -- and where he stood regarding Vietnam -- than Hersh or his book.

It's really sad how, to this day, the McCarthy faction is so embedded in their own lies.  But lies started his campaign, lies and schemes by the press.  Hersh rushes over it but it's there if you read slowly -- the hideous Mary McGrory, the former CBS news honcho Blair Clark, etc, etc.  McCarthy was a made up myth.  A neocon, in fact.  It probably galls the McCarthy faction to this day knowing the reality that their little rat only got as far as he did because RFK was assassinated.  Even as far as he got, he didn't manage to get the nomination (it went to Hubert Humphrey).

It's a gossipy read, the section on McCarthy, which almost comes to life.

Anything else worthy of praise?  Maybe the footnote that starts on the bottom of page 328 and better captures the Barack Obama White House than any lengthy tome has.


The rest of the book is lifeless and dull.  It needed a strong editing hand and several rewrites to shape this nonsense.  No one has bothered to try.  Asking a reader to pay $27.95 for this book is asking a great deal.

Anyone looking for insight into the Iraq War will be disappointed.  Hersh is only interested in the Abu Ghraib prison scandal and then only in passing. Page 308 of a book with 333 pages of text.

Friends of the late Senator Frank Church might wish Hersh has focused more on Abu Ghraib and less on the portrait of Church who comes off bitchy and ambitious.  Does Hersh not realize how ambitious he himself is and has been?  He certainly sees ambition as a flaw in others.

He spends a lot of time teasing the reader with things he doesn't sketch out.  Lew Wasserman's mafia connections?  A passing sentence.  Wasserman and Jules Stein built MCA with mafia help and by ripping off African-American performers like Lena Horne.  Enough years have passed, you'd think the truth could be told.

In Wednesday's snapshot, I noted past history with Hersh including the fact that I had accused him -- and he had denied -- ratting out a public protest, informing on what was planned.  I dropped out of the action because of the fact that there was a rat in the midst.  So did Coretta Scott King.  She had no idea who it was.  I believed then it was Sy Hersh.  He denied it.

One of my worst qualities -- or at least the one that always ticks me off -- is that I will doubt myself.  When I know I'm right and someone assures me that, no, they didn't do whatever it is they did, I will take their word and assume automatically that I was wrong.

Reading REPORTER, I'm suddenly reminded of how right I was to suspect Hersh and I do believe he was a rat.  Why was he present at planning sessions?  He showed up out of nowhere, this NEW YORK TIMES reporter who covered the CIA.  Just showed up.  Now he couldn't -- and he didn't -- participate in the protest for peace that took part.  As a reporter for THE TIMES, he couldn't.  And he wasn't reporting on peace protests for THE TIMES.  So why was he there?

I believe I know why he was there.  He was gathering information to sell people out.  He wanted a bigger story and was willing to do favors (such as spying and snitching).  As I said in Wednesday's snapshot, that's what I thought happened and journalists have no ethics.

This comes through repeatedly in the book.  For example, then CIA-head William Colby?  He wants a story killed in the fall of 1973 -- a rather major story that would finally emerge in 1975 -- about a submarine and Hersh agrees to kill it.  But, of course, quid pro quo.  He'll gladly drop the story but needs something in exchange.

That's the reality of reporting.

It's also probably the scariest part of the book.

I disagree with Hersh, for example, about politics.  Eugene McCarthy was scum -- you didn't have to wait for his 1980 endorsement of Ronald Reagan to grasp that.  RFK would have been not just a better choice, he would have been the best choice.

Now you can disagree with that and Hersh does.

But here's what you can't disagree with: A truth teller tells truth.

Hersh isn't telling truth, not full truth.  It's half-truths and evasions.  He covers for this person or that person based on his own personal biases and beliefs.  He makes deals to conceal information and kill stories -- legitimate news stories -- based on his own capricious whims and alleged judgment.

Sadly, it is reporting -- or what passes for it in the United States.

And that might be the saddest conclusion when you reach the last page of REPORTER: A MEMOIR  -- that and the fact that your average alley cats have more integrity, they're motivated by lust, not vanity.