Saleh al-Auqaeili died yesterday. He was part of the 30 member Sadr bloc in Iraq's Parliament and he was assassinated in a bombing. From yesterday's snapshot:

Mariam Karouny and Aseel Kami (Reuters) note that another MP from the Sadr bloc, Bahaa al-Araji, is calling it an assassination and has stated, "We are not excluding the possibility that it might be a government-linked group which carried it out." Jeffrey Fleishman (Los Angeles Times) quotes al-Araji telling Al Arabiya TV, "There will be a battle in the elections and this [killing] is indeed a liquidation. We have warned that the Sadr movement has been targeted, especially in seats where they already hold office."

In "Roadside Bomb in Baghdad Kills Shiite Legislator" (Los Angeles Times) today, Jeffrey Fleishman reports that the Sadr City section of Baghdad saw fighting between, on one side, Sadr supporters and, on the other, Iraqi and US forces. Fleishman explains:


A resident of Sadr City, who gave his name only as Mohammed, said fighting broke out about 11 p.m. as militants clashed with Iraqi soldiers and, later, U.S. troops who arrived for backup. Heavy fighting lasted about an hour and was followed by intermittent gunfire, he said.

Fleishman also notes that Ahmed Massoudi ("a Sadr spokesman") states, "The occupation sent us a message by staging this attack because of our stance against the agreement" and by "this attack," he's referring to the assassination. Sam Dagher (New York Times) notes a different spokesperson in "Roadside Bomb in Baghdad Kills Shiite Legislator:"

Mr. Sadr's chief spokesman, Sheik Salah al-Obeidi, said he had no doubt that the United States had ordered the killing, given the Sadrist movement’s strong opposition to the security agreement being negotiated between Washington and Baghdad. "The pressure by the United States on Iraq to sign the treaty was rather obvious over the past week. We saw that with Negroponte's visit," Sheik Obeidi said by telephone.
Deputy Secretary of State John D. Negroponte said Tuesday during a visit to Baghdad that American and Iraqi negotiators were close to resolving issues that had stalled the signing of the agreement, which is intended to govern the presence of American soldiers past December.
Sheik Obeidi said that Mr. Ugaili was involved in formulating the Sadrist movement’s positions on the deal and had been charged with commenting publicly on the issue by the 30-member Sadrist parliamentary bloc.
"By killing Ugaili they are silencing a major opponent of the agreement," Sheik Obeidi said.
He said his movement was planning to demonstrate in Baghdad on Oct. 18 against the American presence in Iraq. Iran, which the United States has accused of backing Shiite militias in Iraq, including elements of the Mahdi Army, has voiced its strong opposition to the agreement.

The attack also raised questions about whether the Iraqi government, which sent troops into Sadr City in May, is equipped to secure the district, once controlled by militias loyal to Sadr. The troops' deployment came as Sadr announced that his movement would focus more on humanitarian assistance than armed struggle.
"We have laid the blame on the occupation forces and the Iraqi government for the martyrdom of [the lawmaker] because the explosion happened in an area that is under the control of" American forces, Massoudi said.
Maher Karim, 32, one of the lawmaker's bodyguards, said Auqaeili died at a hospital hours after the attack.
"Because of the political tension in Iraq, the doctor was worried," Karim said of Auqaeili in an interview Thursday night. "He asked us many times if anyone wanted to resign [and said] they could do so at any time."

U.S. and Iraqi officials are seeing a shift in violence in Iraq from mass car bombings to assassinations using magnetic bombs, weapons with silencers and bicycle bombs. As provincial elections approach, some officials worry that assassinations will increase as political parties try to eradicate their competitors.

"Some of the organizations that are seeking political power are resorting to intimidation and violence," said Maj. Gen. Michael L. Oates, the commander of the Army's 10th Mountain Division, whose area of command includes most of southern Iraq. "So you'll see individual bombs used against a prominent member of a party. I personally think we will see an uptick of that type of violence as we go into the election cycle because . . . the way some people deal with political tension here is to eliminate the other parties by using violence."

Iraq Veterans Against the War's Adrienne Kinne was featured in a report on ABC's World News Tonight. Brian Ross, Vic Walter and Anna Schechter's "Exclusive: Inside Account of U.S. Eavesdropping on Americans" (ABC News, link has text and video) notes:

"These were just really everyday, average, ordinary Americans who happened to be in the Middle East, in our area of intercept and happened to be making these phone calls on satellite phones," said Adrienne Kinne, a 31-year old US Army Reserves Arab linguist assigned to a special military program at the NSA's Back Hall at Fort Gordon from November 2001 to 2003.

Kinne described the contents of the calls as "personal, private things with Americans who are not in any way, shape or form associated with anything to do with terrorism."

WATCH Kinne discuss why it was 'awkward' listening to her fellow Americans.

For some strange reason, instead of being happy that the news is getting out Amy Goodman and other losers are trying to claim credit. Goody insists she was covering this in May! Another Panhandle Media loser insists he was on in the summer of 2007. April 15, 2007 we noted Ron Jacobs' "A Conversation with Three Iraq Veterans Against the War" (CounterPunch). I'm sure someone covered it before Ron's article. From his article, this is Adrienne speaking:


I've been very frustrated as well. I thought that Vermonters voting for impeachment on town meeting day would mean something. I thought Vermont's State reps would have done something by now to take it to the next level, vote on their own resolutions maybe. I expected Vermont Congressman Peter Welch to stand up and start impeachment in DC. I'm very sick of Congress's failure to act more decisively. Bush has used our soldiers to spy on Americans and to torture. He has lied to the American public to get Americans to support an illegal and immoral war, which I believe makes him guilty of the murder of all of our fallen soldiers and Iraqi civilians. I believe that he needs to be held accountable for his actions. I believe that Congress needs to stop whining about Bush's threats to veto their withdrawal bills. They are using Bush as an excuse for their failure to act and get us out of Iraq, when they could be impeaching him right now. It's all related.

March 25th's snapshot noted Kinne's Iraq Veterans Against the War's Winter Soldier (regarding this topic, she was noted in other snapshots for her remarks regarding health care at Winter Soldiers):

On the US presidential race, Lucy notes this from Team Nader:

On the Road With Ralph 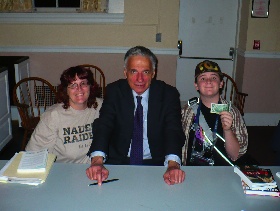 They're charging through airports, eating up highways, setting up, taking down, rushing ahead, and framing the shot. They capture video of real people asking questions at events, not just the candidates.

And, of course, they get Ralph Nader's and Matt Gonzalez's responses out to you and to the world. The media team you helped to build with your donations is hitting its stride.

Pictured above (with Ralph) is Media Team member Karen Kilroy and her son Brock. Check out other recent photos at http://flickr.com/photos/votenader.

The Nader Media Team has some new videos up on YouTube that we'd like you to watch and send around to your friends.

Remember, you made these possible!

First, check out the Vice-Presidential Debate video that will give you an entertaining way of showing your friends and family how Matt Gonzalez would've handled Joe Biden and Sarah Palin.

Then, watch videos from Ralph's recent swing through New England:

Nader on becoming civically active, before a great crowd in Burlington, Vermont.

On the passage of the Bailout Bill.

It's very important, as November draws near, that we all try and expand our social circles. Many people have never seen Ralph or Matt speak and video is the next best thing to a live event.

Please choose the videos you like, and send them to your e-mail list. Post links to them on blogs that you read, or on your own blog. Your contributions continue to make our video production possible and we are still ramping up to our best stuff. Stay tuned by subscribing to our YouTube channel.

PS: If you donate $100 or more now, we will send you an autographed copy of Ralph's classic -- The Seventeen Traditions (HarperCollins 2007). The 150-page hardcover book details the seventeen traditions that Ralph grew up with and is the closest thing so far to a Ralph Nader autobiography. So, don't miss out on this limited edition offer. (This offer ends October 12 at 11:59 p.m.)

anna schechter
Posted by Common Ills at 4:51 AM