When will self-described Iraq 'expert' Joe Biden be asked about the protests?

In the US, War Hawk Joe Biden is actively pursuing the Democratic Party's presidential nomination to the best of his ability -- which isn't much, is it?  We've noted his 'plan' to be saved by the South Carolina primary is ridiculous and that if he fails in both Iowa and New Hampshire, supporters go elsewhere by the time South Carolina rolls around.  That's reality.  It happens over and over.  Joe losing Iowa in 2008, please remember, meant that he dropped out of the race less than 12 hours after the Iowa caucus finished their business.  He didn't even wait for New Hampshire.  Losing Iowa and knowing he was polling poorly in New Hampshire meant pack it in.

I followed with the sideshows to another town
And I found you in a trailer on the camping grounds
You were betting on some lover, you were shaking up the dice
And I thought I saw you cheating once or twice, once or twice
I heard your bid once or twice
Were you wondering was the gamble worth the price
Pack it in
I heard you did! Pack it in
-- "The Midway," written by Joni Mitchell, first appears on her album CLOUDS

Pack it in.  That's what he did before.  Steve Kornacki (NBC NEWS) just noticed that no one has ever lost Iowa and New Hampshire both and won the nomination.  He writes:


Joe is familiar with this reality.  Again, in 2008, losing Iowa was enough to make him pack it in.

War Hawk Joe Biden has been joined on the campaign trail by War Hawk John Kerry.  That's really all the two share -- John, after all, is a border-line sex addict and also someone no one was hoping would return to public life.  Rick Sobey (BOSTON HERALD) observes:

Voters down the street from the Joe Biden rally Sunday in New Hampshire shrugged and shook their heads about former Secretary of State John Kerry’s endorsement of the former vice president — saying it’s more of the same “old guard politics.”
The former Massachusetts senator who was the 2004 Democratic nominee for president spoke for more than 20 minutes during Biden’s campaign event at Nashua Community College on Sunday.

Yep.  Joe's not the future, he's the failed past.  He's every establishment politician who gave lip service to the need to address climate change but never produced any real actions to do so.


Joe can't stop lying -- it has nothing to do with a stutter.

Matt Viser‏Verified account @mviser 5h5 hours ago
Joe Biden, speaking about cost of education, says that his son Beau never missed a payment on his student loans and yet, when he died, still owed $60k. Joe Biden says that he has been paying the loan off.
86 replies363 retweets1,569 likes


There are two lies there.  The first is that Beau never missed a payment.  The second is that Joe has been paying it off.  Hunter Biden told Adam Entous (THE NEW YORKER) that he, Hunter, paid off his brother's loan.  Joe can't stop lying.

Ryan Saavedra‏Verified account @RealSaavedra 4h4 hours ago
Ryan Saavedra Retweeted Axios
Joe Biden is mentally falling apart, watch how angry he gets toward the end of this interview with an outlet that is very friendly toward him
Ryan Saavedra added, 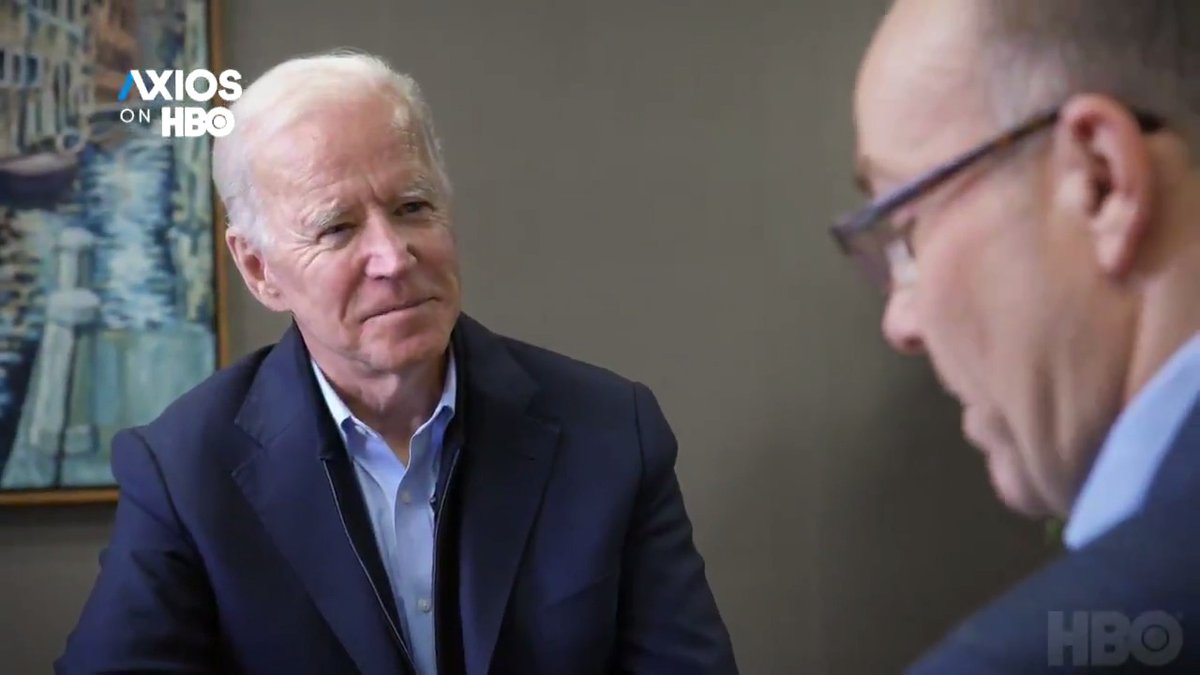 When will Joe Biden be asked by the press whores in the press corps about what's going on in Iraq?  Isn't Joe a self-professed expert on Iraq.  Protests have been going on for months.  No one's bothered to ask Joe about that or the violence that the Iraqi government has targeted the Iraqi people with.

He is one of at least 452 protesters who have been killed.  At least another 20,000 have been injured.  Still the Iraqi people take to the streets to demand a better government.

But Iraq 'expert' Joe Biden has nothing to say?


The ambassadors of Britain, France, and Germany have urged caretaker Prime Minister Adil Abdul Mahdi to investigate the killings of protesters in Iraq since October 1.
The diplomatic missions released a joint statement on Sunday (December 8) saying that the ambassadors had met with Abdul Mahdi to condemn the killing of protesters, including 25 in Baghdad on Friday.
They urged the caretaker prime minister to ensure the protection of the protesters during the demonstrations, according to the statement, and also urged Abdul Mahdi to “urgently investigate and hold accountable those responsible for the killings.”
“No armed group should be able to operate outside the control of the state.”
The three ambassadors also “encouraged the government to ensure that its recent decision to order the Popular Mobilization Forces to stay away from protest locations, and to hold accountable those who violate this order, will be implemented,” it said.


On Saturday, diplomatic missions in Iraq also resoundingly expressed their horror at a deadly attack on unarmed protesters near Baghdad’s Tahrir Square that killed 25 people and called on the government to bring the perpetrators to justice.

Yet not one word from Joe Biden the Iraq 'expert.'  There have been two debates since the protests started and not one question on Iraq from the moderators -- though Anderson Cooper did have a chance to play gossip and bring up Ellen DeGeneres for a final debate 'question' -- that's about the level of intelligence and caring from our press whores in the press corps.


Isaiah's THE WORLD TODAY JUST NUTS "I Like Being A Doormat" went up this morning.