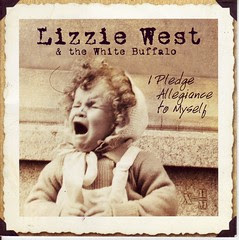 The field reveals that something
was concealed
We make a deal to feel again --
To ask what is the means,
and to what end?
What is the cause that we defned?
The flag is flying across
the country,
Me and the band, we play in bars
And Glyn, she opints out to
the highway
"The flags fly the highest where
the people buy their cars"
She says, "19 miles to Baghdad,
I guess we haven't come so far"

Kat: So sings Lizzie West on "19 Miles to Baghdad," one of fourteen songs off I Pledge Allegiance to Myself. The CD is credited to Lizzie West & the White Buffalo and the album was recorded over a two year period "in Nashville, Jamaica and New York." If you are familiar with "19 Miles to Baghdad," possibly that results from hearing it on the January 05, 2007 broadcast of Democracy Now! (To all musicians, Amy Goodman noted that the program was interested in featuring new music during the breaks. We are talking about a program that is broadcast around the world.) Or maybe, like C.I., you were already hip to the CD and trying to turn your friends onto it? If you are in either camp, you probably already own I Pledge Allegiance to Myself. You're already grooving on her cover of Bob Marley's "Stand Up" and much more. The rest of you, pay attention.

That's how the CD opens, with a song ("Take These Demons" written by Lizzie West and Anthony Kieraldo) that tips the hat to Dylan's "Knocking On Heaven's Door." It's a strong opening, just vocals and piano, and, in its own way, provides the same chills "Jesus died for somebody's sins but not mine," the opening lines to Patti Smith's Horses.

That's because Lizzie West isn't just a song writer, she's a story teller. Before some of you tune out, she's a real story teller and that means sex can be addressed. Got your attention again? Good.

Packing more heat than little Justy's wettest dream, "Rope Me In And Smoke Me" explains sexual attraction between non-virgins. Hearing it, the Disney Kids will probably get all itchy in their chastity belts, grown ups will just embrace it. "If you are going to squeeze me," she sings, "Juice me up and drink me, If you are going to start me, Finish the job, If you are going to grope me, Rope me in and smoke me, But baby just don't leave me, Drooling after dark." She wrote the song and I'm sure many women out there are thinking, "Yeah, and I've lived it."

And that's true of all her compositions. You recognize life in them. Like me, you also may hear a writer interacting the world and traces of Sam Shepard and Eudora Welty in West's lyrics. With Lizzie West, we're dealing with an adult artist and my review was delayed for the usual reasons (sitting on my ass, too many other things to do) but also as a result of Diana Ross' latest CD which is a true embarrassment. On the one hand, we have a woman exploring, on the other, we have a very mature woman sounding like a lounge act, a really bad lounge act.

What does West sound like musically? The album strikes me as bluesy. On song after song, West is working a groove and, due to the sound of her own voice, bluesy may be the best word for it. It's not blues-lite or blues on steroids, it's just the blues in the best sense. You can dance to it, you can contemplate to it ("think" is too weak a word for what you will do pondering the lyrics). Maybe there's too much life in the songs for some to get behind the use of "bluesy"?

The Lizzie West Story, as I understand it, is about an artist that the Warners Music Group was high on a few years back. They intended to break her wide open.

While it is shocking that the same labels churning out crap could recognize a genuine artist these days, the story is an old one. A promising woman gets signed for what she can do and the labels then refuse to heed Dionne's cry of "Don't Make Me Over." They need to sell the T&A because that's all they know. No offense to West's T or A, I'm sure they're lovely, but this dumbing down usually results in women quickly discarded by labels and often leaving the music scene.

There are a few suvivors. Bonnie Raitt would be an example of one. Warners never knew how to market her. In fact, they dropped her from their label in the mid-eighties. Raitt would be the success story by the end of that decade. Did she change that much? Did she have an artistic breakthrough in the intervening years? No. She just got lucky. She wasn't going to be play "the girl" and was probably too old to be marketed that way. Through good luck, she was finally able to deliver the goods to many -- something she'd been doing to the faithful all along.

It's hard to think of a woman that's ever been promoted by a big label as an artist. Barbra Steisand was promoted by her manager, not by Columbia which didn't know what they had even as they watched in shock as the first album slowly began climbing the charts. The labels, like many of the so-called critics, market T & A when it comes to women. The only exception is when they're dead. A dead woman becomes a melodrama. Poor Billie Holiday. Sad Janis Joplin.
Artists marketed as soap opera. If you don't see the double standard, think of the way Jim Morrison is marketed. It's not poor pathetic Jim, just looking for one good woman to love, one good woman to be at his side, and turning to drugs in despair.

But that's how women get marketed as artists. The rest of the time, it's the T & A parade. So much so, that I almost feel sorry for Britty as each attempt at attention getting backfires and makes her even more pathetic. Someone told her she could sing, that she had a great body (even before she suddenly developed breasts in what must have been the latest recorded case of puberty ever -- either that or the rumors are correct and their implants), and that she was going to, as Irene Cara once sang, "live forever."

Someone should have told her a real cautionary tale early on, the history of Samantha Fox. Instead, she's bound and determined to continue believing she has talent and that, even if the labels have given up on it, she can still be marketed off her breasts.

Sadly, that's too many "success" story for the big labels as well. They grab a woman whose singing would have you covering your ears if you stumbled across her at a park, sell the body, she goes along willingly, and as the body and interest fades, she's left to whine, "Where did my fans go?"

But, like I said, almost. I almost feel sorry for that group of women who offer themselves as professional teases never grasping that blue balls have a sell-by-date.

The women who get my sympathies are the ones who bust their asses probing life in song. Some of them write the songs, some just sing them, a few do both. When you hear one, you're the better for it because that what art does. But if art (or even "art") doesn't come with a penis attached, the big labels fumble it. Over and over.

It's why, if you're a Lucinda Williams fan, you find yourself asking, "Why did it take so long for her to find an audience?" The same label that can even work a minor hit by the supposedly grown up Jordan Knight a few years back can't promote the work of women.

So West is not a new story in the world of music history. She's one of the few who survived the process. That's because she was smart enough to self-check out on the big labels. She had enough faith to realize the problem was not with her. Now she's recording for Appleseed Recording. They may or may not know how to market her. But they seem to sense she is the real deal and doesn't need monkeying around with.

January 5th was a big day for Lizzie West and could have been a big day for I Pledge Alliegiance to Myself. "Kat, who is she?" asked the e-mails. You should have been writing C.I., I was in the dark as everyone else on that day. What I did know was that "19 Miles From Baghdad" was an epic. C.I. slipped me the CD that evening when we all got back home from a speaking/listening tour. But a lot of people were trying to find it. Sabrina wrote that she was shocked because she felt sure her local Borders would have it. She made a trip to just to pick it up only to discover it wasn't there.

That story was echoed in e-mail after e-mail. If you were one of the wiser community members, you didn't bother to make a trip, you just went online. Amazon was popular in the e-mails but Dallas, who ordered as soon as Amy Goodman announced who the artist was, went to an independent online dealer and he asked me to note it: CD Baby. Dallas praises the speed with which the CD arrived and notes that the company sends out funny e-mails (intentionally funny ones).

If you haven't heard I Pledge Allegiance to Myself, you're cheating yourself. In "Portrait Of An Artist As A Young Woman (Thank You)," West writes and sings thanks for things that inspire. Pick up the CD and you'll probably create your own fourth verse where you give thanks to West.

lizzie west
lizzie west and the white buffalo
i pledge allegiance to myself
justin timberlake
disney kids
kats korner
the common ills
Posted by Common Ills at 8:03 AM