The Iraqi political scene has been ablaze for the past 72 hours due to the emergence of recordings attributed to Nuri al-Maliki, the ex-Iraqi PM, in which he appears to be criticising and insulting Moqtada al-Sadr, one of Iraq's strongest Shiite political figures whose faction won big in the 2021 general parliamentary election.

“The issue is that there is a British project aiming to put Moqtada in control of the Shia and Iraq, then they would kill him and give Iraq to the Sunnis. The issue is not al-Maliki [myself], I can just leave and take refuge in the house of Malek and have 2000 fighters protecting me, no one will be able to get to me. That project exists, but I am fighting it, and it is to be fought politically and militarily,” said Nuri al-Maliki about his longtime political rival, Moqtada al-Sadr, in a leaked recording.

“Iran helped al-Sadr, to make him a new Nasrallah [Lebanese Hezbollah chief] in Iraq”, he continued in his tirade against the Shiite leader. “Moqtada is a murderer, how many did he kill in Baghdad? The kidnappings, the car bombs, he is not a master, he is a coward, a traitor, an ignorant who knows nothing (…) I know the Sadrists, I fought them in Basra, Karbala and Baghdad, we had no weapons and the Iranians had given them advanced missiles and we still won,” he said of al-Sadr and his followers.

Nouri al-Maliki.  A major player in Iraq.  One that the press ignored in the lead up to the October 10th election -- the western press ignored.  That pleased the US State Dept but don't pretend it was journalism.  They really continue to ignore him.

Recordings featuring supposedly Nouri aren't being covered by THE WASHINGTON POST, THE NEW YORK TIMES, MCCLATCHY . . . go down the list.  It's a story, a rather major story and all over Arabic social media.  Just not covered by US outlets.

In a series of Tweets, Tammus Intel covers the recording.

Noori Almaliki: 1- The next phase in Iraq is war, the other speaker says "we are ready" ( after analyzing the records it turned out that the ones who were talking with Noori Almaliki are members of Kataib Hezbollah) #Iraq
1:31 PM · Jul 16, 2022

2- I told Mustafa Alkadhimi that everyone will protect themselves by their own and Muqtada is coming to kill and slaughter and i will not count on army and police. 3- Muqtada will target me first because i ruined their agendas in Iraq. #Iraq
1:31 PM · Jul 16, 2022

4- I started arming groups and if he attacks us i will even attack Najaf. 5- Muqtada wants blood and he's coward, he wants money and he robbed Iraq, he thinks that he's the Mahdi. 6- My tribe will protect me and they are ready. #Iraq
1:31 PM · Jul 16, 2022
7- I call my good supporters to be ready and i will also not count on the PMF because they are also cowards. 8-Iraq is heading to a bloody war that no one will be saved from unless we end Sadr, Halbosi and Barzani project. #Iraq
1:31 PM · Jul 16, 2022

In the above, you see the paranoia we first reported -- and were slammed for doing so and told we were wrong.  But I was right.  Nouri was installed as prime minister because the CIA assessment was that his intense paranoia could be used to control him.  (I see someone's Tweeting tonight about Nouri's paranoia -- an American -- and I find it hilarious that -- first off -- they act like they always knew it and -- secondly -- that in 2006 when we were writing about it this same person e-mailed the site to tell me I didn't what I was talking about.)  When the US press was hailing Moqtada as a "kingmaker," I was pointing out the road blocks emerging and tying those to Nouri.  In the recording, Nouri takes responsibility for those roadblocks (he'll be attacked first by Moqtada for ruining his agenda).

Only the foolish count Nouri out.  He's the former prime minister and forever thug and until he's in the ground, he's going to be a major factor in Iraq's politics.  The crooked game has always been rigged and he's always known how to play it.

Nouri Al Maliki is back — almost — two months short of the eighth anniversary of his toppling as premier, back in October 2014. The 72-year-old former premier is now a frontrunner for the premiership, nominated to the job by his allies in the Iran-backed all-Shiite Coordination Framework.

In mid-June the Al Sadrist bloc, a total of 73 MPs, collectively resigned from parliament, leaving Al Maliki’s State of Law Coalition as the largest Shiite bloc in the Chamber of Deputies, with 33 seats, making him suddenly eligible for Iraq’s top job, raising eyebrows among friends and opponents alike. His Shiite allies are promising a Maliki cabinet, with many questioning whether they can secure a 165-vote majority in parliament to make him premier.

Al Maliki’s opponents — mainly Sunni MPs — are appalled by the prospects of his comeback, pointing to his earlier track record as premier from 2006-2014. It was under Al Maliki that Shiite death squads were formed and given the freedom to roam the streets of Baghdad, assassinating prominent Sunnis whose only crime was coming from the same community that had produced Saddam Hussain. Tribal leaders were shot, retired officers were abducted from their homes and executed, and so were former members of the Baath Party. Arbitrary arrests were commonplace, and so was torture and mock trials. Sunnis insist that they were treated as an underclass under Al Maliki, denied access to top government jobs.

Against all odds, however, and despite Sunni objections, Al Maliki managed to stay at his job for eight long years, thanks to the unwavering support of Shiite militias like the Badr Organisation of Ammar Al Hakim and the Mehdi Army of Moqtada Al Sadr.

Well, thanks to the unwavering support of Bully Boy Bush and Barack Obama nd Joe Biden, let's divide up the credit correctly.

Biden's Awful Record On Abortion Over The Years

The American Century Is Over, w/ Daniel Bessner 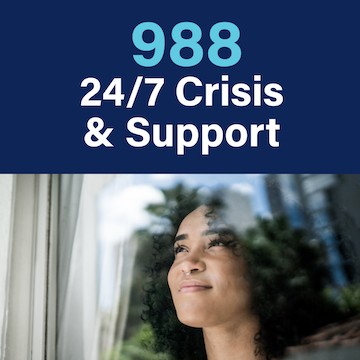 New 9-8-8 Number to Ease Access for Individuals, Veterans, in Distress

Washington, DC – Iraq and Afghanistan Veterans of America (IAVA) announces the launch of the new 988 Mental Health Crisis Hotline/Veterans Crisis Line (VCL). Beginning tomorrow, veterans can now dial 988 and then press 1 to immediately contact the Veterans Crisis Line (VCL). The new, shorter number will address the need to ensure that individuals and families, including veterans, experiencing mental health distress will be able to easily access help and resources.

“IAVA is proud to join with the Department of Veterans Affairs and our nation’s mental health community to advocate for and support this critical resource for American families,” said IAVA CEO Jeremy Butler. “Suicide prevention has been a top priority since IAVA’s founding, and we are excited for the 988 number to go live, which will enable veterans and all Americans to more easily access vital support during times of crisis.”

This change is the result of the enactment of the National Suicide Hotline Designation Act (S. 2661) which designated 988 as the universal telephone number within the U.S. for purposes of the national suicide prevention and mental health crisis hotline system, operating through the National Suicide Prevention Lifeline and VCL. This IAVA-backed bill was signed into law on October 17, 2020.

IAVA is calling on every state to ensure they are prepared to handle the increase in call volume by adequately equipping and staffing call centers and establishing sustainable funding.

Iraq and Afghanistan Veterans of America (IAVA)  is the voice for the post-9/11 veteran generation. With over 425,000 veterans and allies nationwide, IAVA is the leader in non-partisan veteran advocacy and public awareness. We drive historic impacts for veterans, and IAVA’s programs are second to none. Any veteran or family member in need can reach out to IAVA’s Quick Reaction Force at quickreactionforce.org or 855-91RAPID (855-917-2743) to be connected promptly with a veteran care manager who will assist. IAVA’s The Vote Hub is a free tool to register to vote and find polling information. IAVA’s membership is always growing. Join the movement at iava.org/membership.

back forty - lessons from the field