Saturday, July 2, 2016.  Chaos and violence continue, a bomb goes off in Baghdad, the United Nations releases the data for June's dead and wounded, calls go out for changes in Iraq's election law, and much more.

Baghdad's slammed with a bombing today. 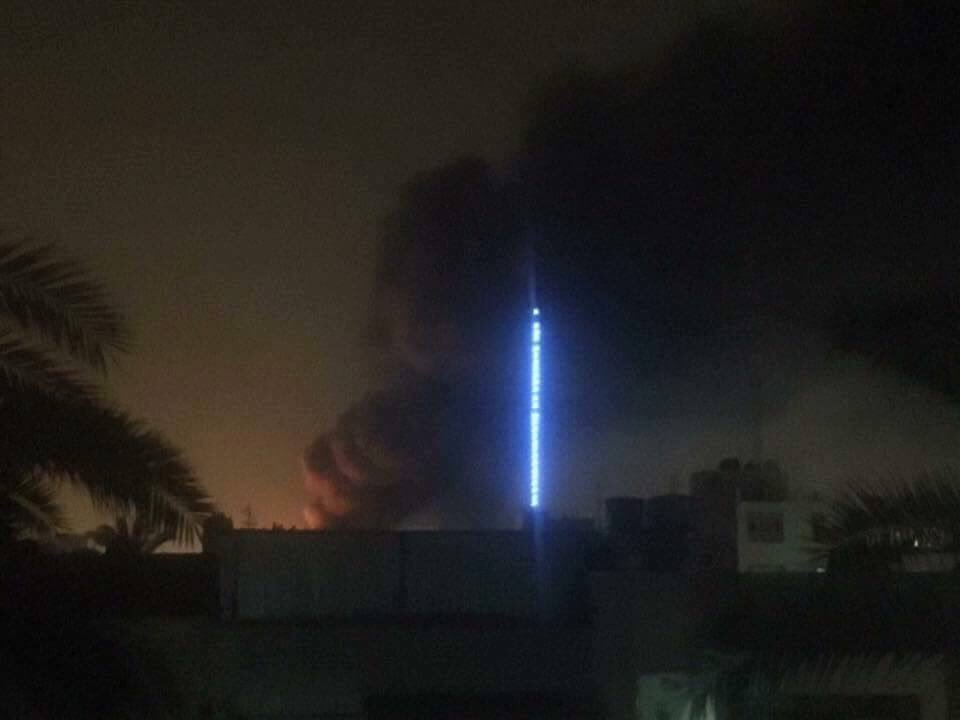 ALSUMARIA reports it was a suicide car bomber.

AP counts 18 dead and forty-five injured in the bombing.  The bombing is already 'yesterday' (time change) in Iraq:

Among other violence today, ALSUMARIA reports 1 commander of an Iraqi brigade was shot dead by an Islamic State sniper, and a bombing east of Baquba left 1 Shi'ite militia member dead.  And the US government continued dropping bombs on Iraq:


Strikes in Iraq
Attack, fighter, and remotely piloted aircraft conducted 15 strikes in Iraq, coordinated with and in support of Iraq’s government:

-- Near Sinjar, a strike suppressed an ISIL mortar system.

And yesterday was the start of the month which means the United Nations Assistance Mission for Iraq issued the death and wounded tolls for June:

Baghdad, Iraq, 01 July 2016 – A total of 662 Iraqis were killed and another 1,457 were injured in acts of terrorism, violence and armed conflict in Iraq in June 2016*, according to casualty figures recorded by the United Nations Assistance Mission for Iraq (UNAMI).

A total of 280 members of the Iraqi Security Forces (including Peshmerga, SWAT and militias fighting alongside the Iraqi Army but excluding Anbar Operations) were killed and 312 were injured.

According to the casualties recorded for June, Baghdad was the worst affected Governorate with 978 civilian casualties (236 killed and 742 injured). Ninewa 56 killed, Salahadin 24 killed and 21 injured, Kirkuk 20 killed and 11 injured, while Diyala had 21 killed and 8 injured, and Karbala 8 killed and 18 injured.

According to information obtained by UNAMI from the Health Directorate in Anbar, the Governorate suffered a total of 357 Civilian casualties (15 killed and 342 injured).

The overall casualty figures have dropped over the previous month of May, where a total of 867 were killed and 1,459 were injured. But the casualty figures for June are likely to increase due to the combat to liberate Fallujah in Anbar Governorate.

The Special Representative of the United Nations Secretary-General (SRSG) for Iraq, Mr. Ján Kubiš, regretted that the violence and the casualties among civilians continued during the holy month of Ramadan.

“We had hoped for a period of calm during holy Ramadan, a month of peace and compassion, but unfortunately the violence continued to take its toll on civilians. The terrorists did not spare an occasion to strike at markets, mosques and areas where people gathered in order to exact maximum casualties among civilians, despite the religious occasion and in total disregard of the values of Islam. In addition, tens of thousands of civilians also were forced to flee their homes in Fallujah as a result of the fighting there,” Mr. Kubiš said.

The SRSG reiterated his call on the parties to undertake every effort to protect the lives of civilians.

* CAVEATS: In general, UNAMI has been hindered in effectively verifying casualties in conflict areas. Figures for casualties from Anbar Governorate are provided by the Health Directorate and are noted. Casualty figures obtained from the Anbar Health Directorate might not fully reflect the real number of casualties in those areas due to the increased volatility of the situation on the ground and the disruption of services. In some cases, UNAMI could only partially verify certain incidents. UNAMI has also received, without being able to verify, reports of large numbers of casualties along with unknown numbers of persons who have died from secondary effects of violence after having fled their homes due to exposure to the elements, lack of water, food, medicines and health care. For these reasons, the figures reported have to be considered as the absolute minimum.


In light of all this violence, some try to impose sense or order upon it.


Azeem Ibrahim (AL-ARABIYA) is only the latest to do so and only one of many to insist that the 2003 invasion gave Iraqis an opportunity that they blew:


But they have failed to take that chance in a spectacular fashion, as even Iraqi insiders who initially supported the Invasion have admitted: "Iraqi mistakes are orders of magnitude more important to what has gone wrong in Iraq than American mistakes." Iraqis did not build political parties to take part in the democratic process based on shared visions for the future of Iraq, say based on left, right, or centrist political ideologies. Rather, they have created parties based on sectarian lines and narrow localised interests. And those parties have always looked to exclude competitors and assert their dominion over the institutions of state. Thus, the political system in Iraq was not an inclusive democracy: instead it was a sectarian exclusivist zero-sum competition for power and resources within the semblance of a parliamentary democratic system.
Fast forward ten years, and that has resulted in the de facto fragmentation of the country in the Shiite, Sunni and Kurdish areas, the bitter war against the Sunni ISIS in the north-west, the atrocities on all sides of the conflict, the massive dislocation of people and the ongoing humanitarian crisis both in Iraq and in neighbouring Syria. Yet the problems of Iraq are not new ones, wrought by the American-led invasion. They are the old ones of a bitterly sectarian politics. The Invasion made a cold civil war into an overtly hot one. But the atrocities, the mass killings, the sectarian struggles had been going on long before, even when the country was nominally at peace. The problems, in other words, are not so much with what the Invasion changed -- rather, they are with what has remained the same.


There may be truth in some of that.

But there's a larger truth that such arguments ignore.


The Iraq War did officially kick off with the invasion, but those being invaded were put in charge of nothing.

Instead, the foreigners invading put Iraqis who long ago fled the country in charge.

A bunch of exiles out of the country for decades were put in charge.

They meant nothing in Iraq.


They had long ago fled.

They didn't understand Iraq at that point but were put in charge.

They spoke for no one but themselves.

So don't whine that Iraq blew its chance when Iraqis were never given any chance.

You might be able to make an argument that had Iraqis in their own country been allowed to take leadership, Iraq might be better off than it is now.


But you can't argue that they blew it because they were never given the chance.

The political experience in Iraq has many critics.


ALSUMARIA reports that Shi'ite cleric and movement leader Moqtada al-Sadr is calling for a change in the election law and for the electoral commission to be abolished.  Moqtada was also asked about former prime minister Nouri al-Maliki's praise for the militias and Moqtada declared he was not impressed.


Calls for changes come during a week that saw Iraq's highest court overrule Haider al-Abadi's attept at unilateral changes which included replacing ministers on his Cabinet.  Wael Grace (AL MADA) notes that Haider has stated he will respect the decision of the court.


There are no changes for the Ashraf community, they continue to be persecuted in Iraq.


Background:  As of September 2013, Camp Ashraf in Iraq is empty.  All remaining members of the community have been moved to Camp Hurriya (also known as Camp Liberty).  Camp Ashraf housed a group of Iranian dissidents who were  welcomed to Iraq by Saddam Hussein in 1986 and he gave them Camp Ashraf and six other parcels that they could utilize. In 2003, the US invaded Iraq.The US government had the US military lead negotiations with the residents of Camp Ashraf. The US government wanted the residents to disarm and the US promised protections to the point that US actions turned the residents of Camp Ashraf into protected person under the Geneva Conventions. This is key and demands the US defend the Ashraf community in Iraq from attacks.  The Bully Boy Bush administration grasped that -- they were ignorant of every other law on the books but they grasped that one.  As 2008 drew to a close, the Bush administration was given assurances from the Iraqi government that they would protect the residents. Yet Nouri al-Maliki ordered the camp repeatedly attacked after Barack Obama was sworn in as US President. July 28, 2009 Nouri launched an attack (while then-US Secretary of Defense Robert Gates was on the ground in Iraq). In a report released this summer entitled "Iraqi government must respect and protect rights of Camp Ashraf residents," Amnesty International described this assault, "Barely a month later, on 28-29 July 2009, Iraqi security forces stormed into the camp; at least nine residents were killed and many more were injured. Thirty-six residents who were detained were allegedly tortured and beaten. They were eventually released on 7 October 2009; by then they were in poor health after going on hunger strike." April 8, 2011, Nouri again ordered an assault on Camp Ashraf (then-US Secretary of Defense Robert Gates was again on the ground in Iraq when the assault took place). Amnesty International described the assault this way, "Earlier this year, on 8 April, Iraqi troops took up positions within the camp using excessive, including lethal, force against residents who tried to resist them. Troops used live ammunition and by the end of the operation some 36 residents, including eight women, were dead and more than 300 others had been wounded. Following international and other protests, the Iraqi government announced that it had appointed a committee to investigate the attack and the killings; however, as on other occasions when the government has announced investigations into allegations of serious human rights violations by its forces, the authorities have yet to disclose the outcome, prompting questions whether any investigation was, in fact, carried out."  Those weren't the last attacks.  They were the last attacks while the residents were labeled as terrorists by the US State Dept.  (September 28, 2012, the designation was changed.)   In spite of this labeling, Mohammed Tawfeeq (CNN) observed that "since 2004, the United States has considered the residents of Camp Ashraf 'noncombatants' and 'protected persons' under the Geneva Conventions."  So the US has an obligation to protect the residents.  3,300 are no longer at Camp Ashraf.  They have moved to Camp Hurriyah for the most part.  A tiny number has received asylum in other countries. Approximately 100 were still at Camp Ashraf when it was attacked Sunday.   That was the second attack this year alone.   February 9th of 2013, the Ashraf residents were again attacked, this time the ones who had been relocated to Camp Hurriyah.  Trend News Agency counted 10 dead and over one hundred injured.  Prensa Latina reported, " A rain of self-propelled Katyusha missiles hit a provisional camp of Iraqi opposition Mujahedin-e Khalk, an organization Tehran calls terrorists, causing seven fatalities plus 50 wounded, according to an Iraqi official release."  They were attacked again September 1, 2013 -- two years ago.   Adam Schreck (AP) reported back then that the United Nations was able to confirm the deaths of 52 Ashraf residents.