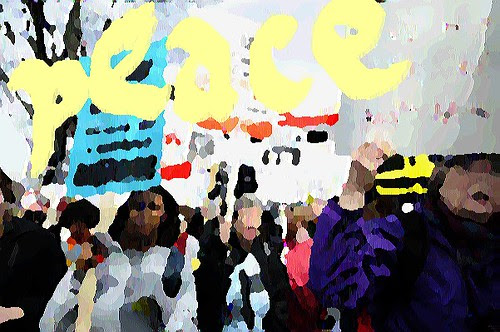 Yet again, no article filed from Iraq in today's New York Times. A lot of money being spent on . . . who knows what. McClatchy posted a video report from Baghdad yesterday. Meanwhile BBC reports that a video has been released showing Peter Moore and four other British contractors, kidnapped in May of 2007. The five have not been released and the only thing that is known at present is, as of eight days ago, Peter Moore is still alive.

Remember in October of last year as the waves of Operation Happy Talk kept insisting that the "Awakening" Councils had been turned over? They still haven't been. But Tim Cocks (Reuters) reports the US military is declaring that 90% of them have been turned over. There was no way for the press to independently verify that claim. Cocks writes, "Only about 10,000, all in the northern province of Salahuddin, remained to be handed over in the coming months." In the coming months? There was a deadline for this handover and it was publicized. Has everyone forgotten?

Cocks reports that approximately 50,000 of the estimated 90,000 "Awakening" members are on the payroll of the central government in Baghdad (that's not also independently verified) which would mean, if true, 40,000 are not and these who are not? al-Maliki will take over payment supposedly "between now and May" according to US Major General Mike Ferriter.

The following community sites have updated since last night (even if the listed post doesn't reflect that):

The Daily Jot
ROUNDTABLE ON IRAQ
17 hours ago

Thomas Friedman is a Great Man
Iraq
17 hours ago

Kat's Korner (of The Common Ills)
Iraq
17 hours ago

Oh Boy It Never Ends
How stupid is Danny Schechter?
1 day ago

Barack has not apologized and people need to quit making excuses