Activist Ihab Al-Wazini was assassinated earlier tonight, Ihab was the leader of the Karbala protests and a very important civil organizer. #Iraq 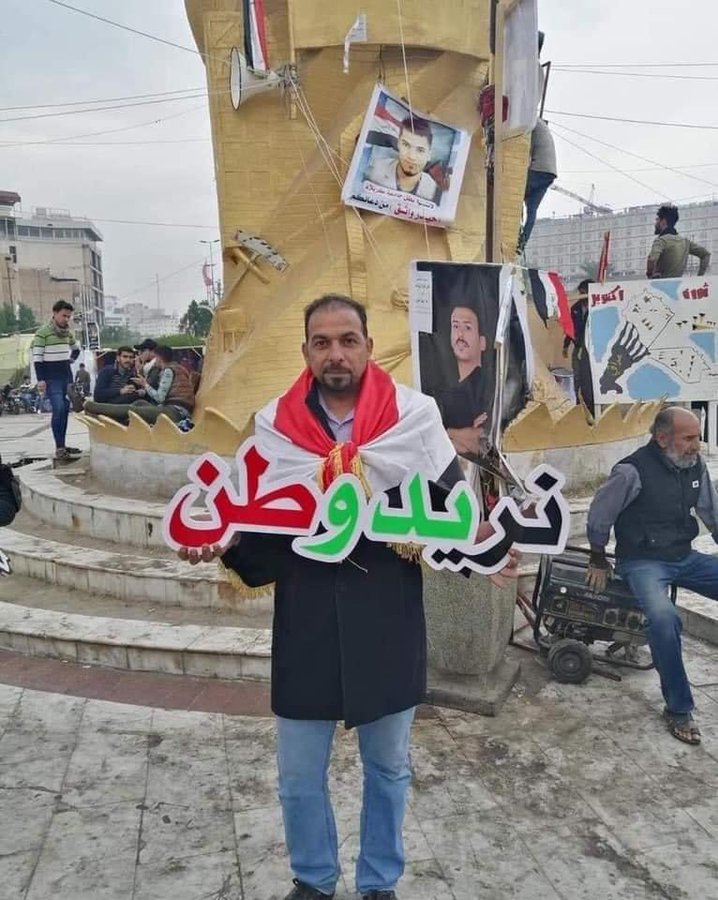 File Ihab under another 'unsolved' murder.  That's what they remain in Iraq.  Doesn't matter what the preening prime minister Mustafa al-Khazami says.  His empty words have made it clear that on one will ever be held accountable, that Iraqi citizens can be targeted repeatedly and one will ever be brought to trial.

There's not a lot of justice in the world.  CNN viewers were reminded of that when US House Rep Sheila Lee Jackson popped up on TV spewing praise for Bully Boy Bush.  Jeremy Goldberg Tweets:

@CNN
Sheila Lee Jackson has TDS so bad she's forgotten that George W. Bush started a war by lies, an utter disaster for the US, and a nightmare beyond belief for Iraq. Among the unending series of liars who have come after Jimmy Carter, he's the one who most deserved impeachment
11:39 PM · May 8, 2021

Sadly, too many people believe Sheila Lee Jackson stands for something.

Greed.  She stands for greed.  It's a damn shame that 'big man' Greg Palast refuse to tell the full truth about Sheila.  The Whore for Enron, that's what she was, let's be honest.  When Enron went up inf lames, Sheila walked away with clean hands -- something not even the extreme Congressional crook Phil Gramm was able to do.

Sheila got to walk on by with little attention given to how she profited from the misery of so many others.

So the news that she's whoring for Bully Boy Bush?  Not surprising.  Criminals tend to run in the same circles.

Congresswoman Jackson Lee is a member of over 60 Congressional Member organizations, including:

The list continues but we'll stop it there.  Ask Sheila when the last time was when that Committee met?

She's full of nonsense and always has been.  Doubt it?  Read Glen Ford's BLACK AGENDA REPORT article from 2013.

In other news, NRT reports:

The French Consulate General in Erbil has added its voice to a growing chorus of foreign diplomats who have expressed their concern about the controversial decision by a court in Erbil to deny the appeal of five journalists and activists.

In a statement issued on the consul general’s Twitter account on Saturday (May 8), the consulate said that it “notes with concern” the verdict.

“It recalls the friendship that binds us to the Kurdish people and the cooperation between France and the Kurdistan Region are based on common values and shared principles, among which freedom of the press, expression, and assembly hold a fundamental position,” it continued.

“It expresses its deep concern at any attempt to criminalize contacts between the press and civil society and representatives of diplomatic and consular offices in the Kurdistan Region.”

On Thursday, the Court of Cassation in Erbil upheld a lower court’s February 16 decision to convict journalists Sherwan Sherwani, Guhdar Zebari, and Ayaz Karam and activists Shvan Saeed Omar and Hariwan Issa of allegedly attempting to undermine the security of the state. They were each sentenced to six years in prison.

All five defendants were arrested last autumn as part of a crackdown on protest organizers and journalists by the security forces in Duhok, which are affiliated with the Kurdistan Democratic Party (KDP).

They all strongly denied the charges and said that some statements admitted by the court contained things that they never said or were elicited using coercion.

We'll wind down with this from Arundhati Roy (ICH):

During a particularly polarising election campaign in the state of Uttar Pradesh in 2017, India’s prime minister, Narendra Modi, waded into the fray to stir things up even further. From a public podium, he accused the state government – which was led by an opposition party – of pandering to the Muslim community by spending more on Muslim graveyards (kabristans) than on Hindu cremation grounds (shamshans). With his customary braying sneer, in which every taunt and barb rises to a high note mid-sentence before it falls away in a menacing echo, he stirred up the crowd. “If a kabristan is built in a village, a shamshan should also be constructed there,” he said.

Perhaps he is happy now that the haunting image of the flames rising from the mass funerals in India’s cremation grounds is making the front page of international newspapers. And that all the kabristans and shamshans in his country are working properly, in direct proportion to the populations they cater for, and far beyond their capacities.

“Can India, population 1.3 billion, be isolated?” the Washington Post asked rhetorically in a recent editorial about India’s unfolding catastrophe and the difficulty of containing new, fast-spreading Covid variants within national borders. “Not easily,” it replied. It’s unlikely this question was posed in quite the same way when the coronavirus was raging through the UK and Europe just a few months ago. But we in India have little right to take offence, given our prime minister’s words at the World Economic Forum in January this year.

Modi spoke at a time when people in Europe and the US were suffering through the peak of the second wave of the pandemic. He had not one word of sympathy to offer, only a long, gloating boast about India’s infrastructure and Covid-preparedness. I downloaded the speech because I fear that when history is rewritten by the Modi regime, as it soon will be, it might disappear, or become hard to find. Here are some priceless snippets:

“Friends, I have brought the message of confidence, positivity and hope from 1.3 billion Indians amid these times of apprehension … It was predicted that India would be the most affected country from corona all over the world. It was said that there would be a tsunami of corona infections in India, somebody said 700-800 million Indians would get infected while others said 2 million Indians would die.”

“Friends, it would not be advisable to judge India’s success with that of another country. In a country which is home to 18% of the world population, that country has saved humanity from a big disaster by containing corona effectively.”

Modi the magician takes a bow for saving humanity by containing the coronavirus effectively. Now that it turns out that he has not contained it, can we complain about being viewed as though we are radioactive? That other countries’ borders are being closed to us and flights are being cancelled? That we’re being sealed in with our virus and our prime minister, along with all the sickness, the anti-science, the hatred and the idiocy that he, his party and its brand of politics represent?

Ending the Forever War: What does the US withdrawal mean for Afghans?

Is the US really ending the “forever war”? What does it mean for Afghans on all sides of the conflict? Rania Khalek is joined by Aziz Hakimi, an Afghan expert and researcher at the Chr. Michelsen Institute, who has done extensive field work throughout Afghanistan, for a comprehensive discussion on Afghanistan’s past and future in light of the American intervention and coming withdrawal. » Become a patron: https://www.patreon.com/BreakThroughNews​ -------------------------------- » Like us on Facebook: https://www.facebook.com/BTnewsroom​ » Tweet us on Twitter: https://twitter.com/BTnewsroom​ » Follow us on Instagram: https://www.instagram.com/btnewsroom/​ At Breakthrough News we believe in the power of independent media. Five mega-corporations dominate the media landscape — controlling 90% of what we read, watch and listen to. They control the news cycle, to which social media and even most “alternative” media is forced to respond. We are breaking through that cycle. We tell the untold stories of resistance from poor and working-class communities — because out of these stories we will construct a different narrative of the world, as it is and in real time. People’s movements in every corner of the globe are changing history and shifting consciousness. But these movements barely receive any coverage from the corporate media. They need visibility. They need amplification. They need a media arm to break through. We can be that media arm, but only with your help. Become a Patron and join us on the front lines in the battle of ideas. Subscribe and follow us! https://www.youtube.com/breakthroughnews​ @BTNewsroom

Support the show on Patreon: https://patreon.com/papichulomin​ Donate on PayPal: https://paypal.me/papichulomin​ Donate on GoFundMe: https://gf.me/u/yctyrt​ Richard Medhurst on Twitter: https://twitter.com/richimedhurst​ Like the show on Facebook: https://facebook.com/papichulomin​ Richard Medhurst on Instagram: https://instagram.com/richardtmedhurst​ Independent media is constantly under threat and we need your help to keep going. Rokfin: https://rokfin.com/richardmedhurst​ Venmo: @RichardMedhurst CashApp: $RichardMedhurst Bitcoin address: bc1qnelpedy2q6qu67485w4wnmcya5am873zwxxvvp About Richard Medhurst: #RichardMedhurst​ is an independent journalist and commentator. Regular live streams and interviews with popular guests from the Left such as Glenn Greenwald, Mike Figueredo (Humanist Report) and Max Blumenthal (Grayzone). Fluent in English, Arabic, French, German, and having grown up across several continents, Medhurst’s show aims to provide a critical analysis of electoral politics and international affairs from an anti-imperialist viewpoint. #savesheikhjarrah