Navy SEAL Edward Gallagher is being charged by the Navy with stabbing and murdering a wounded person, shooting at noncombatants, posing for a photo and performing his re-enlistment ceremony next to a dead body.
Gallagher is being charged with various violations of the Uniform Code of Military Justice while deployed to Mosul, Iraq, in 2017, related to the various incidents.
Gallagher "did ... with premeditation, murder a wounded male person" under his care by "stabbing him in the neck and body with a knife" while battling ISIS in Mosul in May 2017, according to the charge sheet dated Friday.
Cmdr. Tamara Lawrence, public affairs officer with the Naval Special Warfare Command, said the Navy is taking the allegations seriously.

These charges are charges.  No one has been tried yet.  He has had an Article 32 hearing.  That's not a trial, it's like a hearing in civilian courts where a plea is entered before someone goes onto a trial.  It's purpose is to determine whether there is a need to go forward with a trial (they are determining probabilities -- going forward says there are probabilities -- it does not determine the person is guilty).  Gidget Fuentes (NAVY TIMES) notes:

But during two days of testimony in his Article 32 hearing here, Gallagher’s criminal defense attorneys painted a different picture of the highly-decorated SEAL, describing him as a battle-hardened hospital corpsman who properly treated a gravely-wounded ISIS fighter, only to have his reputation smeared by a handful of spiteful SEAL malcontents in the 19-man platoon who griped about his gruff leadership style.
Gallagher, a veteran of eight overseas and combat deployments, is facing 14 criminal counts, including premeditated murder for allegedly stabbing to death an alleged ISIS fighter Iraqi forces brought for medical care by his SEAL Team platoon in Mosul, Iraq, in early May 2017.

Vaishnavee Sharma (WASHINGTON EXAMINER) reports: "Gallagher was arrested Sept. 11 and held at San Diego’s Naval Consolidated Brig Miramar. He considered filing a civil rights lawsuit against Navy investigators after alleging that they 'laid siege' to his home and marched his children out of the house during a probe."

On the charges, Dave Phillips (NEW YORK TIMES) notes the charges, "They said he fired into civilian crowds, gunned down a girl walking along a riverbank and an old man carrying a water jug, and threatened to kill fellow SEALs if they reported his actions."

If he is found guilty, he should be sentenced to the maximum.  He's not been found guilty and he remains innocent until/unless determined otherwise. 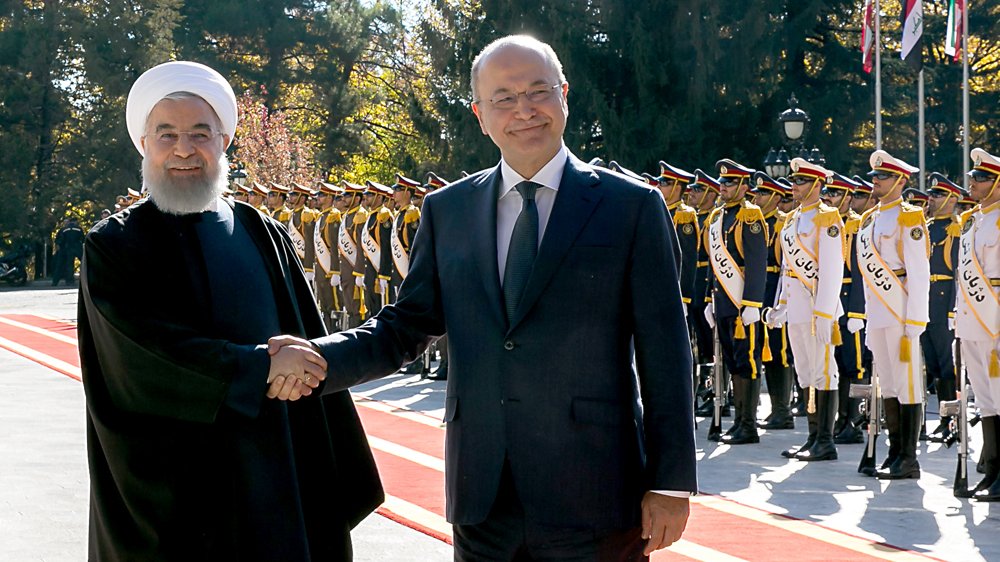 Iran's Supreme Leader Ayatollah Ali Khamenei on Saturday urged strengthening relations between the Islamic republic and Iraq, Tehran Times daily reported.
"The Islamic republic's officials are very serious and determined on expanding ties with Iraq. I deeply believe in that too," Khamenei said in a meeting with the visiting Iraqi President Barham Salih.

"A dear, powerful, independent and developed Iraq would be very beneficial to Iran and we will stand by our Iraqi brothers," the top leader added.


AFP adds, "The main targets of the US sanctions are Iran's oil exports and its financial sector. However, Iraq is plagued by chronic power shortages and is heavily dependent on Iranian gas for its electricity supply, so Washington granted Baghdad a 45-day waiver from the measures, allowing Iraq to import Iranian gas and energy supplies, as well as food items."  Reminder, the presidential post is pure symbolism.  It's the equivalent of the vice president in the United States.  So what's up with Iraq's new prime minister?

Some Tweets from Sarah Abdallah