Mariam Taha Thompson.  A US government employee who made money on the side via Iraq.  Jerry Dunleavy (WASHINGTON TIMES) reports:

A female linguist who worked for the Pentagon in Iraq pleaded guilty to handing over classified information about on-the-ground human sources who were assisting the United States to a Hezbollah-tied foreign national with whom she was romantically linked, the Justice Department announced on Friday.

Mariam Taha Thompson, 63, was charged last May in federal court with “transmitting highly sensitive classified national defense information to a foreign national," who she believed would provide the information to Lebanese-based Hezbollah, a foreign terrorist organization tied to Iran. Court records show Thompson signed an extensive statement of facts in late January admitting to the covert plot, and she pleaded guilty on Friday. Thompson faces a maximum sentence of up to life imprisonment.

THE TIMES OF ISRAEL adds:

Thompson began communicating with the man, whom she never met in person, in 2017 after being connected via social media by a family member, and she ultimately developed a romantic interest in him, prosecutors said.

After a January 2020 US strike that killed Iran’s top general, Qassem Soleimani, the Lebanese man — who is not named in court papers — asked Thompson to provide “them” with information about the human assets that had helped the US target Soleimani. Hezbollah is backed by Iran and one of Israel’s main regional adversaries.

Investigators say Thompson accessed dozens of files about human sources, including their names, photographs, background information and operational cables that described the information they had gathered. She held top secret securing clearance, but did not need to access much of the information she shared as part of her job.

The US Justice Dept issued the following:

WASHINGTON – A Minnesota woman pleaded guilty today to one count of delivering national defense information to aid a foreign government.

According to court documents, Mariam Taha Thompson, 63, formerly of Rochester, Minnesota, worked as a contract linguist at an overseas U.S. military facility where she was entrusted with a top secret government security clearance. Thompson pleaded guilty to transmitting highly sensitive classified national defense information to a foreign national who she believed would provide the information to Lebanese Hizballah, a designated foreign terrorist organization.

“Thompson jeopardized the lives of members of the U.S. military as well as other individuals supporting the United States in a combat zone when she passed classified information to a person she knew was connected to Lebanese Hizballah, a foreign terrorist organization which intended to use the information to hurt this country,” said Assistant Attorney General John C. Demers for the Justice Department's National Security Division. “To describe this conduct is to condemn it. She will now be held to account for this disgraceful personal and professional betrayal of country and colleagues.”

“The United States entrusted the defendant with highly-sensitive classified information regarding one of its most critical tools — human intelligence in an active combat zone,” said Acting U.S. Attorney Channing D. Phillips for the District of Columbia. “The defendant’s complete betrayal of that trust placed the lives of American men and women on the battlefield, and their allies, in grave danger. Thompson’s arrest and prosecution demonstrate that those who intentionally compromise classified information that is entrusted to them will face swift and dire consequences.”

“It’s astounding that an American working for the U.S. military overseas would abandon her country in favor of terrorists,” said Assistant Director Alan E. Kohler Jr. for the FBI’s Counterintelligence Division. “The FBI and its partners placed a high priority on this case because the defendant provided classified defense information to a foreign terrorist organization, information that put members of the U.S. military in harm’s way.”

“Today’s plea is an example of the FBI’s work and commitment to protecting the United States and our national defense information,” said Assistant Director in Charge Steven M. D’Antuono for the FBI Washington Field Office. “Holding a top secret government security clearance bears a responsibility and commitment to our nation, and betrayal of that trust will not be tolerated. The FBI is charged with safeguarding our nation’s information and will work diligently, along with our partners, to protect intelligence and national security information and relentlessly pursue those who choose to betray their country."

In December 2019, while Thompson was assigned to a special operations task force facility in Iraq, the United States launched a series of airstrikes in Iraq targeting Kata’ib Hizballah, an Iranian-backed foreign terrorist organization. These airstrikes culminated in a Jan. 3, 2020, strike that resulted in the death of Iranian Revolutionary Guard Corps Quds Force commander Qasem Suleimani, as well as the founder of Kata’ib Hizballah, Abu Mahdi al-Muhandis.

Following Suleimani’s death, the unindicted co-conspirator started asking Thompson to provide “them” with information about the human assets who had helped the United States to target Suleimani. Thompson admitted that she understood “them” to be Lebanese Hizballah, including an unnamed high-ranking military commander.

After receiving this request for information in early January 2020, Thompson began accessing dozens of files concerning human intelligence sources, including true names, personal identification data, background information and photographs of the human assets, as well as operational cables detailing information the assets provided to the U.S. government. Thompson used several techniques to pass this information on to the unindicted co-conspirator, who told her that his contacts were pleased with the information, and that the Lebanese Hizballah military commander wanted to meet Thompson when she came to Lebanon.

When she was arrested by the FBI on Feb. 27, 2020, Thompson had used her access to classified national defense information to provide her co-conspirator with the identities of at least eight clandestine human assets; at least 10 U.S. targets; and multiple tactics, techniques and procedures. Thompson intended and had reason to believe that this classified national defense information would be used to the injury of the United States and to the advantage of Lebanese Hizballah.

Thompson faces a maximum sentence of up to life imprisonment. The maximum statutory sentence is prescribed by Congress and is provided here for informational purposes only. The sentencing of a defendant will be determined by the court based on the advisory Sentencing Guidelines and other statutory factors.

Today’s guilty plea was the result of the significant cooperation between law enforcement, the Department of Defense and the intelligence community in the successful resolution of this investigation led by the FBI Washington Field Office.

National Security Division Trial Attorneys Jennifer Kennedy Gellie of the Counterintelligence and Export Control Section and Jennifer Levy of the Counterterrorism Section, and Special Assistant U.S. Attorney for the District of Columbia John Cummings are prosecuting the case. 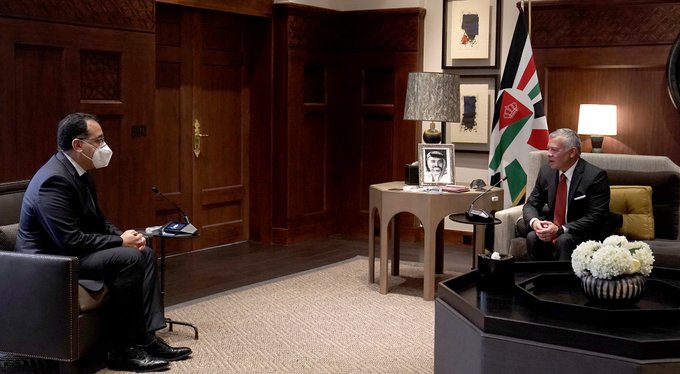 Today Jojrdan's King Abdullah spoke with Iraq's Prime Minister Mustafa al-Kadhimi.  AMMON NEWS notes, "King Abdullah stressed the need to build on the trilateral cooperation mechanism between Jordan, Iraq, and Egypt, in service of their peoples’ interests, adding that he looks forward to the next trilateral summit."  ROYA NEWS adds, "He expressed his desire to hold the next tripartite summit soon."

Iraq’s Prime Minister Mustafa Kadhimi on Saturday issued a statement reaffirming that upcoming parliamentary elections would be held on time, claiming that people were trying to fabricate problems.

“We are committed to enforcing our govt [government] program, in spite of those manufacturing crises,” the prime minister tweeted on Saturday, saying whoever “seeks to spread negativity to destroy Iraqis’ hopes for a better future won’t succeed.”

He added that “elections will be held on time, God willing. We will not backtrack on our state-building program.”

Earlier this week, it was learned that the White House will be entering talks with Iraq about the US presence in Iraq.  After Qassim Abdul-Zahra (AP) broke the news, White House press secretary Jen Psaki was caught off guard during a press briefing on AIR FORCE ONE but later released a statement acknowledging the talks.  Today, PRESS TV reports:

A member of the Iraqi Parliament’s Security and Defense Committee says the lawmakers will adopt a new stand if the new round of talks with Washington on the withdrawal of remaining American forces in the Arab country ends without a decision.

“The parliament will take a new position in the event the new round of strategic dialogue between Baghdad and Washington ends next April without a decision on withdrawal of foreign combat forces from the country,” Kati al-Rikabi told the Arabic service of Russia's Sputnik news agency on Saturday.

Baghdad and Washington are set to resume talks next month on the withdrawal of foreign combat forces from Iraq.

There had been huge popular mobilizations against the Iraq War. But mainstream politicians—John McCain, John Kerry, Hillary Clinton, Joe Biden—got on board, often enthusiastically. Meanwhile, as the violence turned inward, hate crimes against anyone taken for Arab or Muslim were on the rise.

The "shock and awe" U.S. bombing campaign that opened the Iraq War killed nearly 7,200 civilians—more than double the number who died on 9/11. The latter was widely recognized as a generational trauma. The former was a footnote.

In the years that followed, upwards of a million Iraqis would die. But our political culture had so dehumanized these people that their deaths hardly seemed to matter—which is precisely why they occurred.

Fortunately, some things have changed since then.

Our post-9/11 wars are now widely viewed as costly mistakes. Overwhelming, bipartisan majorities of Americans now support ending our wars, bringing the troops home, and shoveling less money into the military—even if our politicians have scarcely complied.

But the risk of dehumanization remains. Americans may have tired of our wars in the Middle East, but surveys show they now express growing hostility to China. Worryingly, hate crimes against Asian Americans—like the recent mass murder in Atlanta—are spiraling upwards.

Jack Allison of Jack AM and Struggle Session podcast joined The Katie Halper Show live from Echo Park Lake in Los Angeles as #EchoParkRiseUp​ protestors organized against the LAPD's raids against the Homeless Encampments.Jack walks us through the protests showing several hundred people peacefully demonstrating while LAPD in riot gear block access to the park. Just hours after Jack's report, the LAPD declared an unlawful assembly after officers claimed the crowd used high-intensity lights to blind officers. After the clash with protestors, officers then moved on the encampment, forcibly removing the 200 or so unhoused within the park, and close to 200 people were arrested. For more on this story, follow #EchoParkRiseUp​ on Twitter and Instagram, and to support both direct and indirect action in Echo Lake Park, you can visit https://www.gofundme.com/f/echo-park-...​ Co-hosting this episode with Katie is Jamie Peck, a writer, podcaster, and co-host of the Antifada (@the_antifada) podcast. ***Please support The Katie Halper Show *** On Patreon https://www.patreon.com/thekatiehalpe...​ Follow Katie on Twitter: https://twitter.com/kthalps

#RichardMedhurst There Is No Real Opposition in the UK

Support the show on Patreon: https://patreon.com/papichulomin​ Donate on PayPal: https://paypal.me/papichulomin​ Donate on GoFundMe: https://gf.me/u/yctyrt​ Richard Medhurst on Twitter: https://twitter.com/richimedhurst​ Like the show on Facebook: https://facebook.com/papichulomin​ Richard Medhurst on Instagram: https://instagram.com/richardtmedhurst​ Independent media is constantly under threat and we need your help to keep going. Rokfin: https://rokfin.com/richardmedhurst​ Venmo: @RichardMedhurst CashApp: $RichardMedhurst Bitcoin address: bc1qnelpedy2q6qu67485w4wnmcya5am873zwxxvvp About Richard Medhurst: #RichardMedhurst​ is an independent journalist and commentator. Regular live streams and interviews with popular guests from the Left such as Glenn Greenwald, Mike Figueredo (Humanist Report) and Max Blumenthal (Grayzone). Fluent in English, Arabic, French, German, and having grown up across several continents, Medhurst’s show aims to provide a critical analysis of electoral politics and international affairs from an anti-imperialist viewpoint.

Like and Subscribe - See Links Below Support us on Patreon at - https://www.patreon.com/HardLensMedia​ Join us on Odysee - https://odysee.com/$/invite/@HardLens...​ Join Our Discord Server - https://discord.gg/AQzJG8x​ Join us on Rokfin - https://rokfin.com/hardlensmedia?cont...​ Send us a Superchat: https://streamlabs.com/hlmv2​ We have Merch - https://teespring.com/stores/hlm3​ See Other Shows in Our Network - https://www.99perspectives.tv​ Intro and Outro Music by NoCopywriteSounds provided by http://spoti.fi/NCS​ In a majority of its Livestream Content