The pandemic continues -- around the world, it continues.  Mustafa Shilani (KURDISTAN 24) reports:

The Iraqi Ministry of Health on Friday said it continues to exert efforts to prepare for the fourth COVID-19 wave in the country after recording a gradual daily increase in the number of infections.

The statement comes as countries worldwide are preoccupied with a new coronavirus mutation that appeared in South Africa, with cases recorded in some European countries and Israel.

He added that healthcare facilities across the country have "excellent" access to medical oxygen and claimed the ministry would further support hospitals in case infections soar.

If the above reassures you, you may not have been paying attention.  "Excellent" access to medical oxygen?  That's really not been something Iraq's had a shortage of.  They've had plenty of oxygen -- and far too many combustibles which is why they've had so many hospital fires.

When the pandemic is over -- has to be some day, right? -- how much negligence will be punished because there's been a lot of it -- around the world.

Not just in Iraq, but around the world.  In Iraq, protests continue.  MEDYA NEWS reports today:

The student protests began on 21 November, ostensibly over the suspension of monthly stipend allowance payments and the government’s failure to provide the most basic services, like drinking water in campuses.

As the protests have continued in cities with university campuses, including Sulaymaniyah, Kalar, Erbil, Halabja, Chamchamal, Kifri and Koya, thousands of people marched towards the city governor’s office in Sulaymaniyah, while in Erbil groups of students blocked the Erbil-Kirkuk highway.

Live rounds were fired at students in Sulaymaniyah with police also using tear gas and water cannon. Many students have been detained, although the number of students in custody is yet to be announced.

There are so many reports circulating of physical attacks on students as well as a barrage of provocations, misinformation and psychological warfare against the students that it is frankly overwhelming and difficult to catch up with.

Throughout the protests this week, there's been one consistent: Kurdish forces attacking the students.  Jack MacDonald Tweets:

These are students.  And they're being attacked by security forces. 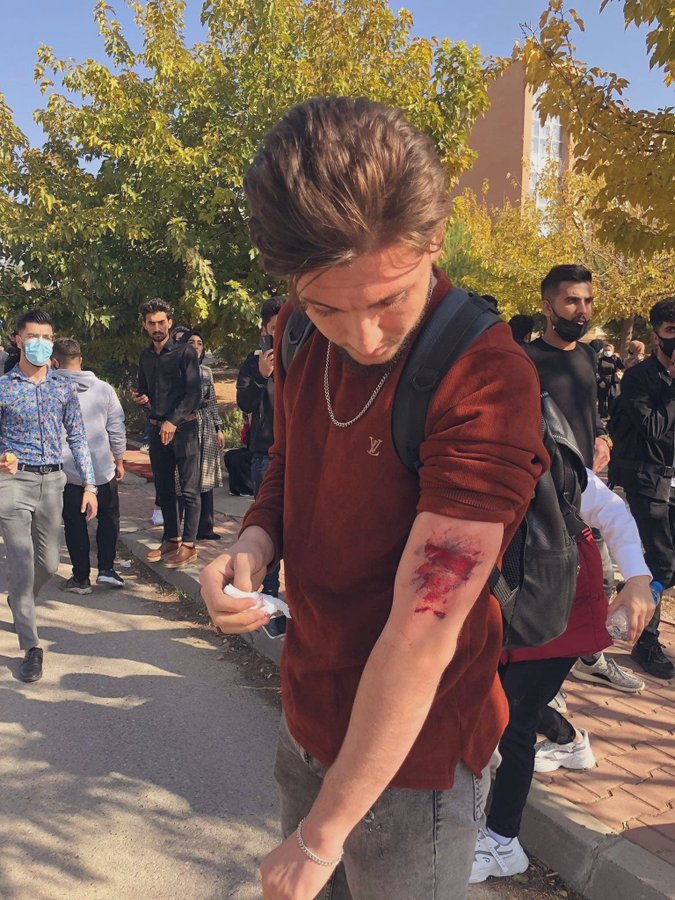 Iraqi Prime Minister Mustafa al-Kadhimi commented on the protest by saying, "the recent painful events in the Kurdistan region, especially in the dear Sulaymaniyah, call for a responsible stance to protect social peace in the country."

Al-Kadhimi added that "peaceful demonstrations are a constitutionally guaranteed right, and attacks on demonstrators, public, or private property, are unacceptable."

Worthless Mustafa never protected the protesters in Baghdad, he's the last to lecture other areas of Iraq.

We'll wind down with this from Joan Cavanagh (NEW HAVEN REGISTER):

On Aug. 29, 10 members of the Ahmadi family, seven of them children, were killed by a U.S. drone strike in Kabul, Afghanistan. While initially stating that the attack assassinated an “Islamic State extremist,” the Pentagon admitted in September that only civilians were killed. “The strike was a tragic mistake,” Marine Gen. Frank McKenzie, head of U.S. Central Command, told the press, offering apologies to the victims’ family and suggesting that the United States was “considering” giving them reparations payments. In early November, an “independent Pentagon review” concluded that the strike “was not caused by misconduct or negligence,” but that it was a mistake which happened “despite prudent measures to prevent civilian deaths.” The review did not recommend any disciplinary action. It merely noted that there were “breakdowns in communication and in the process of identifying and confirming the target of the bombing.” (“Watchdog finds no misconduct in air strike,” Associated Press, Nov. 3.)

Euphemisms aside, what this means is that one branch of the Pentagon investigated another for causing unintended casualties as the result of drone warfare and essentially decided that the mistake was an unfortunate by-product of a usual days’ work that did not go quite as planned.

This strike in Afghanistan gives us a small window into the methods and consequences of the war that the U.S. government is waging daily in our names, and the sense of normalcy with which its architects regard it. So does the air strike on Baghuz, Syria, in 2019, which killed an estimated 60 civilians and whose previously successful cover-up was just revealed by the New York Times on Nov. 13 of this year.

But these “incidents” are just the tip of the iceberg. In the past 20 years, U.S. drone strikes alone in Afghanistan, Iraq, Syria, Jordan, Yemen, Somalia and Pakistan have caused thousands of deaths among noncombatants, the full extent of which remain unknown despite valiant attempts by watchdog groups, whistle-blowers and nongovernmental organizations to document them with no help from the Pentagon and little, in general, from the mainstream media. Many of them have thus gone unreported or underreported. (And the whistleblowers have been prosecuted and sentenced to prison terms.

If This Isn’t BLATANT BRIBERY Then WHAT IS?!!

50% Off All Ms. Memberships This Weekend Only!

At 82, Ruchell Magee Is the Longest-Serving Political Prisoner & Should Be Released

Ruchell Magee is 82 and has been behind bars for 58 years, the longest-serving political prisoner in the country. He was the sole survivor of the 1970 Marin County Courthouse Rebellion in California. In the attempt to free the Soledad brothers, guards shot and killed three prisoners and the judge. Kameron Hurt, organizer with the Coalition to Free Ruchell Magee & member of the Party for Socialism and Liberation, explains his case for freedom and how we can help him get free. For more, visit: www.FreeRuchellMagee.org

THE FACES BEHIND THE COUNTER

The Black Commentator Issue #889 - Thanksgiving: The National Day of Mourning

On the Web at https://www.blackcommentator.com

Our postal address is:

Krystal and Saagar cover the $100 million donation made by Jeff Bezos to the presidential library of Barack Obama which is being funded by private donations instead of taxpayer dollars To become a Breaking Points Premium Member and watch/listen to the show uncut and 1 hour early visit: https://breakingpoints.supercast.com/ To listen to Breaking Points as a podcast, check them out on Apple and Spotify Apple: https://podcasts.apple.com/us/podcast... Spotify: https://open.spotify.com/show/4Kbsy61... Merch: https://breaking-points.myshopify.com/

Support the show on Patreon: https://patreon.com/richardmedhurst Donate on PayPal: https://paypal.me/papichulomin Donate on GoFundMe: https://gf.me/u/yctyrt Richard Medhurst on Twitter: https://twitter.com/richimedhurst Like the show on Facebook: https://facebook.com/richardtmedhurst Richard Medhurst on Instagram: https://instagram.com/richardtmedhurst Richard Medhurst on Substack: https://richardmedhurst.substack.com/ Independent media is constantly under threat and we need your help to keep going. Rokfin: https://rokfin.com/richardmedhurst Venmo: @RichardMedhurst CashApp: $RichardMedhurst Bitcoin address: bc1qnelpedy2q6qu67485w4wnmcya5am873zwxxvvp About Richard Medhurst: #RichardMedhurst is an independent journalist and commentator. Regular live streams and interviews with popular guests from the Left such as Glenn Greenwald, Mike Figueredo (Humanist Report) and Max Blumenthal (Grayzone). Fluent in English, Arabic, French, German, and having grown up across several continents, Medhurst’s show aims to provide a critical analysis of electoral politics and international affairs from an anti-imperialist viewpoint