Of all the people to hate for the Iraq War, Angelina Jolie is really not one of them

Today, Angelina Jolie made her fifth humanitarian trip to Iraq.

RT‏Verified account @RT_com 6h6 hours ago
‘You can smell the bodies’: Angelina Jolie in #Mosul one year after ‘liberation’ by US-led coalition https://on.rt.com/97sb  #Iraq 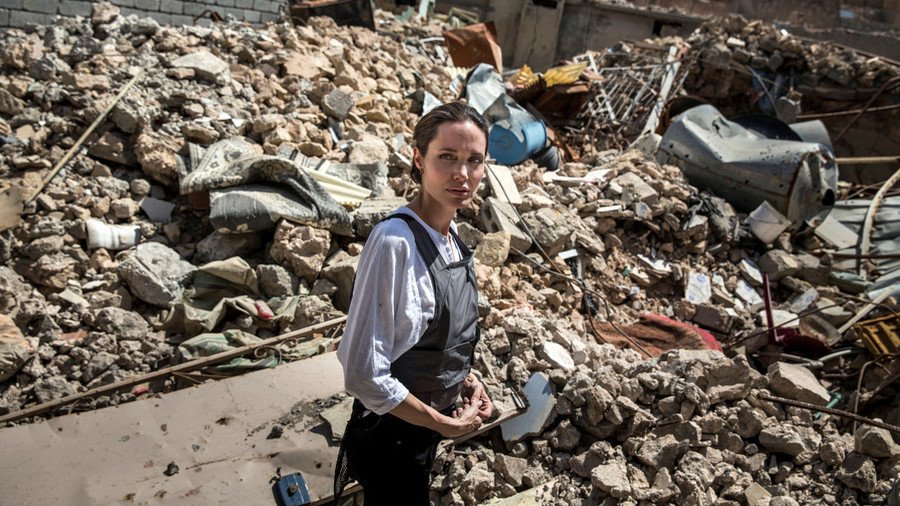 Angelina is attempting to help.  Some people can't handle that.

tim anderson‏ @timand2037 4h4 hours ago
Opportunists International: Angelina Jolie - who backed Washington's 'surge' in #Iraq, which led to the creation of #ISIS, then to the destruction of Mosul and Raqqa - comes back to cry for refugees . Remember this: http://www.washingtonpost.com/wp-dyn/content/article/2008/02/27/AR2008022702217.html … 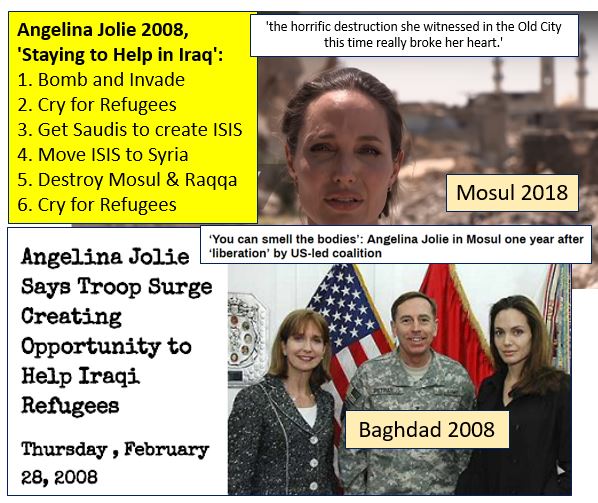 
First off, the so-called 'surge' did not create ISIS.  Stop lying, Tim Anderson.  You can't even keep your lies straight, in fact.

tim anderson‏ @timand2037 Jun 9
Washington created #ISIS through the #Saudis and the ongoing US occupation in #Syria and presence in #Iraq maintains those same terrorists. https://www.almasdarnews.com/article/breaking-isis-terrorists-are-only-present-in-us-controlled-areas-in-syria-russian-mod/ …

You just make s**t up because there's so much hate in your heart.  At least aim it in the right direction and not at Anglina Jolie.

The 'surge' was already in place.  That's 2007, you idiot.  A year later, she's visiting Iraq to advocate for refugees.  That is her role.  She was asked about the current conditions and commented.  In a way that the UN trains you to comment.

So back the hell off, Tim Anderson.  You're an embarrassment.  There are plenty of things to hate in this world, Angelina Jolie is not one of them.

Make an argument that by attempting to help refugees in an occupied country, she is cooperating with the occupiers.  I can respect that.  But to just lie.  And to be so uninformed about ISIS.

Angelina is trying to help.  That doesn't make her right.  It does mean that you should at least be honest if you're trying to criticize her.

And I do believe that you can make the argument that she's sued to give a happy face to the occupation.  I also don't know what would happen to the few refugees helped if she wasn't drawing attention to the plight.

It's the same dilemma I had with Marla Ruzicka's actions.  I didn't condemn Marla and I don't condemn Angelina.  But if you want to make an argument that actions are used to sugar coat the occupation, make that argument.


In Iraq, the big news of the week remains Moqtada al-Sadr's teaming with Hadi al-Hameri.  This was Moqtada's way of circumventing the US government plans to disqualify the election results -- the results that found Shi'ite cleric and movment leader Moqtada in the lead and militia leader Hadi in second place.  REUTERS' journalist Ahmed Aboulenein offers this analysis: