A new round of brazen rocket attacks were launched against US forces in Eastern Syria and Iraq. Iran-backed militias in the region are being blamed for the attacks, which have seen an uptick in recent times. Meanwhile, the Islamic State insurgency may be poised to make a comeback. Is the US on the verge of being pushed out of Iraq? (00:15) An Investigative journalist and “Boom Bust” co-host Ben Swann joins Rick Sanchez with the details. He points out that generations of Iraqis have known the US as an only destabilizing force and that we are leaving a “wrecked country” that neighboring Iran is best-positioned to rebuild. (02:37) Did the FBI help kidnap Princess Latifa Al Maktoum of Dubai and return her to her allegedly abusive father? The famous royal who ran away from her controlling father was placed under house arrest after her recovery, which was made possible by means of geolocation data with which the FBI furnished Dubai, according to reports. RT America's Faran Fronczak reports. (11:51) Plus, when NASA’s Cassini spacecraft collected data on the chemical composition of water plumes that erupt from Enceladus, Saturn’s sixth largest moon, it found a surprisingly high amount of methane, a gas often associated with life on Earth. Some were quick to insist this points to the existence of life on Enceladus, but others are more skeptical. RT America’s Trinity Chavez reports for the News with Rick Sanchez. (17":45) Watch The Full Episode on Portable.TV https://www.portable.tv/series/thenew... #QuestionMore #RTAmerica #TheNewsWithRickSanchez Get exclusive content and watch full episodes now by downloading the Portable.TV app: https://bit.ly/DownloadPortable Telegram: https://t.me/RTAmerica Check out our other shows! NO show does it like this. It’s TIME TO DO NEWS AGAIN with Rick Sanchez News with Rick Sanchez: https://bit.ly/NRSSHOW It’s her take on all things political and she presents ALL the angles: News.Views.Hughes with Scottie Nell Hughes, NVH: https://bit.ly/NVHSHOW What’s your NEWS IQ? Give us 30 minutes, and we’ll take you across the globe! In Question with Manila Chan, IQ: https://bit.ly/IQ_SHOW Steve Malzberg sinks his teeth into the slander, hypocrisy, bias and lies of MSM. MMM…Delicious! Eat The Press: http://bit.ly/EatThePress Candid conversations with the most outspoken guy in Hollywood! Dennis Miller + One! Dennis Miller Plus One: http://bit.ly/DennisMillerPlusOne Let our TV time-machine bring you the week’s highlights and a closer look at the BIGGEST stories, Just Press Play: http://bit.ly/JustPressPlayShow Author and social critic Chris Hedges conducts fascinating in-depth interviews with the fiercest critics of the establishment. Watch all episodes at https://bit.ly/2QIkQZg Yep, it’s Gov. Jesse Ventura and you’re living in his WORLD! Come along for the ride. The World According To Jesse: http://bit.ly/WATJSHOW They’re watching you. Are you watching them? Are you WATCHING THE HAWKS? Watching The Hawks: http://bit.ly/WTHSHOW Follow the twists and turns of the global economy with Boom Bust, the one business show you can’t afford to miss. Boom Bust: http://bit.ly/BoomBustShow Do you keep missing the forest for the trees? Let Holland Cooke show you the Big Picture, The Big Picture: http://bit.ly/TheBigPictureShow

A series of Iranian-backed militia attacks against Americans in Iraq and Syria is piling new pressure on President Joe Biden, with some Republicans criticizing his approach as insufficient and ineffective.

U.S. troops and diplomats in Iraq and Syria were targeted in six rocket and drone attacks this week alone, including when at least 14 rockets hit a base in Iraq on Wednesday, injuring two U.S. service members. The development is the latest in an escalating back-and-forth between the U.S. and Iranian-backed militia groups, which have stepped up attacks on U.S. troops in recent months despite Biden’s stated goal of deterrence through retaliatory airstrikes.

If that's surprising, you haven't been paying attention.  And as we noted Thursday and Friday morning, the calls have been coming from Dems in Congress as well.  People like Speaker of the House Nancy Pelosi have been pressuring Joe for a military response -- immediate -- with no real thought to any impact it might have.

I guess we're all just pretending not to notice?  And pretending like we can let the conversation take place without us on the left offering any input?

Protests are growing in Iraq amid extreme heat and power shortages http://dlvr.it/S3Ts2m 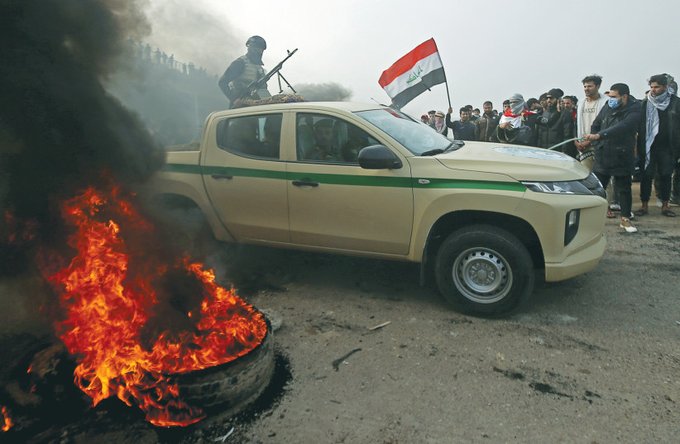 Hundreds of Iraqis demonstrated on Friday in several southern towns and at a government-run power plant against prolonged electricity cuts as the mercury soars.

“We want electricity to be restored and if it isn’t we’re not leaving this plant. We’re going to stay put and shut it down,” demonstrator Diaa Wady said outside Al-Khairat electricity station near Karbala.

The predominantly male crowd surrounded and attacked the car of an official, smashing its rear window and shouting.

“We are peaceful protesters who are here only for our rights. Our demand is for electricity to return and if it doesn’t we’ll bring our tents and camp out,” said frustrated demonstrator Sajjad Aoun Al-Kiriti.

Mustafa Kadhimi's worst fears are coming true.  Protests are taking place ahead of expected elections in October.  He's tried to woo the protesters -- he needs votes.  He's had no luck with some going on the record insisting that they won't be voting.  More to the point, protests right now might impact and/or sway undecideds or those who are lukewarm on Mustafa.  The protests will continue.  Eliav Breuer (JERUSALEM POST) notes:

According to Roey Kais of KAN news, protestors are blaming the government for its energy inefficiencies. A protestor he spoke to claimed that "this is one of Iraq's worst years, as we don't have electricity in nearly the entire country."
According to the protestor, a political activist, "you can see tens of thousands of Iraqi students writing their exams in sweltering heat. It is unimaginable that in the 21st century, we are putting our babies in the refrigerator, and that old people are beginning to die."
The protestor claimed that the main causes of the lack of electricity are governmental corruption and the country's dependency on neighboring Iran. He added that Iran is intentionally supplying Iraq with insufficient energy in order to create economic pressure and force it to speed up payments on loans of up to 5 billion dollars.

In this clip from his interview on PRIMO RADICAL #236, comedian and "Jimmy Dore Show" host Jimmy Dore discusses whether or no Cenk Uygur's views truly changed following The Young Turks' (TYT) $20 million investment deal in 2017.

Saagar details the shady stock trading of Nancy Pelosi and how politicians use their influence to get rich To become a Breaking Points Premium Member and watch/listen to the show uncut and 1 hour early visit: https://breakingpoints.supercast.tech/ To listen to Breaking Points as a podcast, check them out on Apple and Spotify Apple: https://podcasts.apple.com/us/podcast... Spotify: https://open.spotify.com/show/4Kbsy61... Merch: https://breaking-points.myshopify.com/

What They Didn't Teach You About the Civil War

What do you know about the Civil War? Everyone knows the familiar images: soldiers in Union blue versus troops in Confederate gray, the Emancipation Proclamation, the triumphant end of slavery. But there’s something schools don’t teach about the Civil War: it was also America’s greatest left-wing revolution. Professor Matt Karp explains.