Vehicles loaded with concrete castings for the purpose of closing the entire interior of the green zone in Baghdad. Iran backed political groups who lost the election and posted threats to US embassy are protesting against American interference in Iraq election.
1:26 PM · Nov 13, 2021

Hundreds of Iraqi demonstrators protesting the results of the parliamentary elections have closed one of the three gates of the Green Zone in Baghdad, following failed attempts to storm the heavily-guarded area, Anadolu Agency reported on Friday.

Iraqi security forces ramped up reinforcements at the gate near the Ministry of Planning as a precautionary measure.

The demonstrators erected tents following their attempt to burst into the Green Zone, which includes government and ministries' headquarters, as well as foreign missions and officials' residences.

The protesters claim that the results of the 10 October elections were inaccurate and are calling for a manual count of the results.

The vote took place October 10th and there's still no final result.  Over a month ago.  Were there irregularities?  Possibly.  Was there disenfranchisement?  Absolutely.  A week before the elections, it was announced that many militia members would not be allowed to vote in the early elections the Friday before.  Which meant?  They wouldn't be allowed to vote.  The militias had been folded into the Iraqi security forces.  Iraqi security forces were deployed around Iraq to protect polling stations.  That's why security forces were voting early, they wouldn't be able to vote on election day.  As prime minister and commander of the security forces, Mustafa al-Kahdimi should have protested immediately but instead, he didn't even speak out.  Why?  He knew they weren't going to support him.  He knew they weren't going to vote for him so he ignored his responsibilities as commander-in-chief and did and said nothing.  Pathetic.

A top Iraqi lawmaker says he’s confident that last month’s parliamentary elections were rigged, stressing that the possibility of interference by the Israeli regime cannot be ruled out.

There is “certainty” that electoral fraud occurred, , the head of the Fatah (Conquest) Alliance in Iraq’s Parliament, said on Saturday, the Iraqi al-Ayyam website reported.

“The election fraud was carried out via the cyberspace and its goal was to infiltrate Iraq ... and we do not rule out interference by the Zionist entity,” he stated.

Some 3,600 electronic ballot machines stopped working during the elections and failed to send in results, he added. 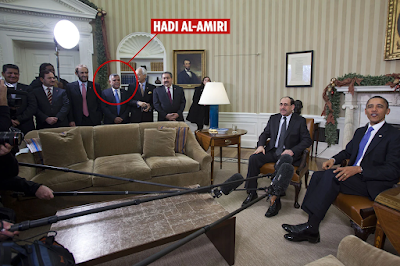 That's him when he was invited to the White House by then-president Barack Obama in 2011.

In 2019, he was said by many, including the White House, to have been behind an attack on the US embassy in Baghdad.

He is a militia leader, the Badr Brigade.  ARAB WEEKLY notes:

Hashed supporters gathered on Friday near one of the entrances to the Green Zone chanting slogans against Kadhimi and “death to America,” correspondents said.

The faced off against security forces deployed to prevent them from storming the highly protected area, which is also home to the electoral commission, government offices and the US embassy.

Several dozen pro-Hashed protesters had set up camp at the same location last Friday after violent clashes with police that left one protester dead, according to a security source. One of the Hashed factions said two demonstrators were killed.

Al-Amiri: The demonstrations are not targeting the winners in the election , but rather against the Commission for its failure to manage the electoral process. #Iraq 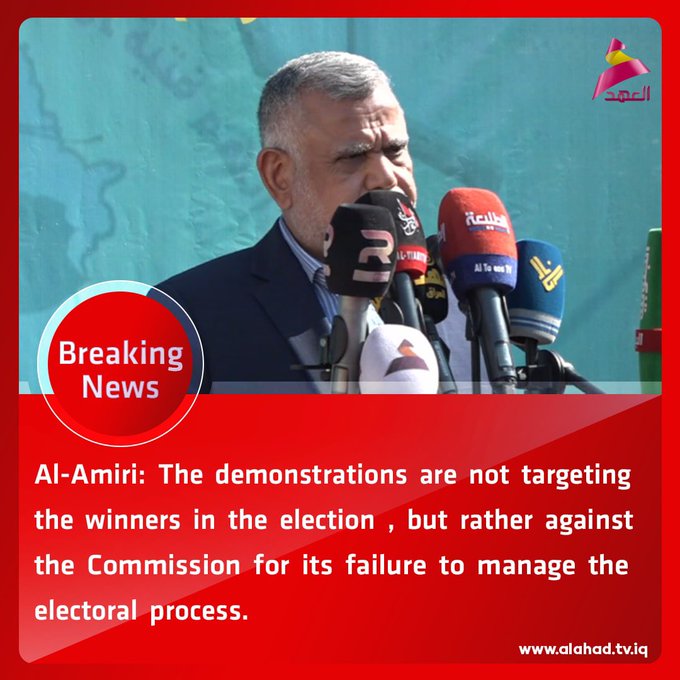 And THE CRADLE notes:

The demonstrators are demanding a manual recount of votes, as they believe that the electronic system led to “fraud” and “manipulation”.

Different political factions have also protested the election results, in particular the Fatah Alliance led by Hadi al-Ameri, as well as Iraqi National Accord party, led by Ayad Allawi.

Pushback with Aaron Maté Support Pushback at Patreon: https://www.patreon.com/aaronmate As a CIA analyst, David McCloskey covered Syria from 2008 to 2014. He draws on his experience for his new spy thriller, "Damascus Station," set during the early years of the Syrian war. David McCloskey joins Aaron Maté to discuss "Damascus Station"; the early years of the Syrian war; the role of foreign powers including the US; the US decision to support the insurgency despite knowing that Al Qaeda and other Salafi jihadist groups were its "primary engine"; allegations of chemical weapons attacks in Syria; and the direction of US policy in post-war Syria. Guest: David McCloskey. Former CIA analyst who covered Syria for six years, from 2008 to 2014. Wrote memos for the President’s Daily Brief (PDB), lived and worked in CIA field stations throughout the region, and briefed senior White House officials, members of Congress, and Arab royalty. His new book is "Damascus Station", a spy thriller set during the early years of the Syrian war. "Damascus Station", by David McCloskey https://wwnorton.com/books/9780393881042 Transcript of this interview: https://thegrayzone.com/2021/11/09/fm... ||| The Grayzone ||| Find more reporting at https://thegrayzone.com Support our original journalism at Patreon: https://patreon.com/grayzone Facebook: https://facebook.com/thegrayzone Twitter: https://twitter.com/thegrayzonenews Instagram: https://instagram.com/thegrayzonenews Minds: https://minds.com/thegrayzone Mastodon: https://mastodon.social/@thegrayzone

Home Tips for a Cozy Winter