As you know Pier 1 Imports was supposed to make a big donation but they went bankrupt and have been bought by the Taliban.

That's from BROS.  Billy Eichner's Bobby and other members of the board of the country's first LGBTQ+ museum are meeting to discuss how to meet their funding goal.  It's a very funny movie and it's now available for rent or purchase on streaming platforms.

Aaron: For work?  I do probate law.  I'm an estate planner.  Basically, I write people's wills.

Aaron: Oh, sure.  When I was a kid, the first thing I would think when I met someone is: Who's that person going to leave their s**t to when they die?  I really wanted to be part of the legal logistics of that.

We later see Aaron at work in the office, sitting with a very crabby elderly man, Mr. Funk, who needs to adjust his will.

Mr. Funk: I just need to figure out where my money is going.

Aaron: Okay, do you have a partner or spouse?

Aaron:  Okay.  Well, uh, sometimes it helps to close your eyes and think about who means the most to you in the world.

Mr. Funk closes his eyes.  Then he opens them.

Aaron: Who is it?

That film really makes me laugh.  It's a great comedy, a great film.  Billy wrote an amazing screenplay and it's a great movie.  Luke and Billy are great in it.

Someone said in an e-mail that I hadn't praised Luke.  I have, he's wonderful in it.  He should be nominated for his performance.  I know Luke so if he's not gotten his due here it's because he's a friend.  I don't know Billy, I've never even met Billy.  I explained -- in the gina & krista round-robin -- that my friends get less credit then they deserve up here.  I explained that I made a point to praise Luke in part because a friend of mine -- a singer -- told me she was kind of hurt that I seemed to promote every singer but her.

I love her work but until she said that?  I really (a) hadn't thought it might give the wrong impression and (b) really didn't think she needed the plug from this site.

Luke does an amazing job, he hits all the notes needed.  It's a tricky part and if you've seen a bad romantic comedy, you know how easy it is for one actor to kill a movie and how hard it can be to play a lead without overdoing it or underwhelming.  Luke is perfect.

If you doubt me on that, that's another reason to go stream the movie.

@billyeichner straight guy here, watching my newly purchased copy of #BrosMovie with my girlfriend. Already laughed a lot! Thank you all for this movie! pic.twitter.com/AAI2M8CeqK

Thank you @billyeichner for the brilliance that was #BrosMovie my wife and 19-year-old son and I really loved it. Hilarious, well written, and superbly acted yet surprisingly poignant and touching. Congrats to you and everyone involved. 👏

I absolutely loved seeing @brosthemovie with my friend Cameron. The comedy is hilarious and I can't believe that the @LGBTQ_Museum is so prominently featured! @billyeichner and Luke Macfarlane were so good together. And that Bowen Yang moment 🤣#BrosMovie #MoviesNow #romcom pic.twitter.com/yTDiiNtP8J

Yo I know I’m late to the game but I just watched #BrosMovie and it was SO GOOD also, Aaron looked just like @Edelman11 I can’t be the first person to think that. No disrespect to the actor. Bravo @billyeichner 💗

Watched #BrosMovie last night and it was incredible. It had everything: it made me laugh, it made me cry, it made me deeply question every element of my dating life. WHAT MORE CAN YOU ASK FOR?! Go watch it. Ideally, multiple times.

"Between having sex with people you don't like and having conversations with people you love, you somehow form a romantic version of single life" is one of the only film quotes this year that's punched my brain in its smug little face. #BrosMovie

The Iraqi Prime Minister-designate, Muhammad Shia Al-Sudani, said yesterday that the political blocs agreed to put forward their candidates to form the new government, leaving the matter of selection to the prime minister.

Al-Sudani said in a press statement distributed yesterday morning, “We affirm that the agreement between the political blocs that make up the coordination framework includes giving each bloc the opportunity to present its candidates to all ministries, and the matter of choosing the candidates is left to the person of the designated prime minister.”

He added that the criteria for naming a candidate to fill the ministerial portfolio are based on “efficiency, integrity and ability to manage the ministry, according to the electoral weights of each bloc.”

There are many problems that the new government will face when formed.  Salman Zidane (AL-MONITOR) reports:

The Iraqi parliament this month is discussing a bill to find solutions to its expanding slum areas. However, several obstacles could hinder this bill from being passed into law amid an ongoing social and political crisis.

Iraq has more than 5,000 slum areas, containing more than half a million housing units, inhabited by approximately 3.5 million people. Most of these slum areas were established with the emergence of the current political regime in 2003.

The search for a solution started in 2014, member of parliament Alia Nassif told Al-Monitor, with a plan to lease the land of informal settlements to their impoverished residents for a small fee. The slum areas lack public services such as paved streets, schools, water, electricity, and other basic needs, she said, and residents “are unable to register their children or complete certain formalities at government institutions.”

Iraq's current housing crisis has driven the price of a square meter in commercial centers in Baghdad up to $20,000, one real estate broker told Euronews, against $600 in the outskirts of cities.

Nassif indicated that parliament will amend the 2014 bill and is seeking to help the dwellers acquire the lands where they are living. But if a plot of land was initially classified as industrial or commercial, it cannot be acquired.

The Iraqi government had proposed a fund to address the problem, to be financed by the reduced rents paid by the residents of these slums, the general budget and loans. The fund would secure basic services in these neighborhoods, such as roads, sewage, water, schools, police stations, healthcare and other services.

As they wait to see if Mohammed can form a government, Iraq got a little bit of relief, "A light rain fell on parts of Iraq on Friday, October 21, bringing some relief to a region experiencing declining rainfall and drought in recent years."

Isaiah invites you to take a moment to enjoy THE PEW

Isaiah's took the "House Reject, House Mess and House Dunce" and put them all on their own show -- he's kind of a Barbara Walters of the comic set.  So sit back and take a moment to enjoy THE PEW.

"Take A Moment To Enjoy The PEW" 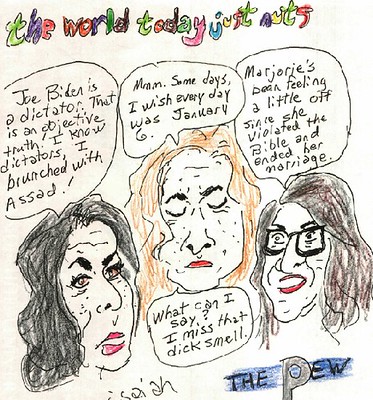 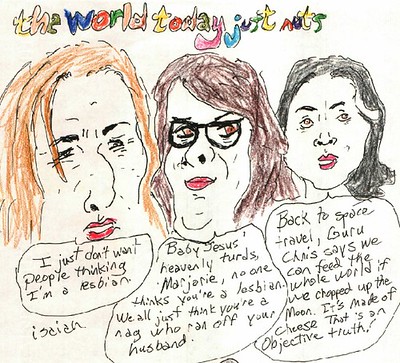 "The Ladies Of THE PEW" 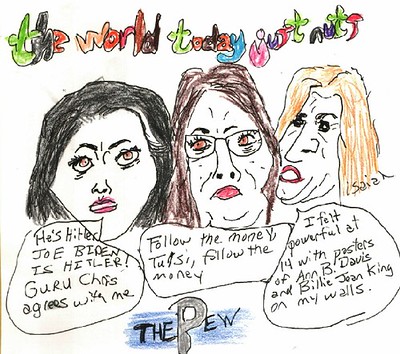 From the Green Party:

No More War In Ukraine

Because the United States is fighting a proxy war with Russia in Ukraine, it is important that the Green Party of the United States have an official statement regarding its position on the war in Ukraine. It is especially important because of the grave danger of nuclear war in which the government has placed our country and the rest of the world. Because one of the Green Party pillars is Peace, we should have a position that is likely to end the hostilities and resolve the differences between Russia and Ukraine in a peaceful manner.

The Green Party of the United States (GPUS) endorse the following statement, on October 10th, 2022, as the official position of GPUS regarding the war in Ukraine:

GPAX/GPUS Statement On War In Ukraine

The Green Party of the United States (GPUS) views the war in Ukraine with great concern. As the US party of peace, we emphatically oppose the recourse to war as a means of inter-state dispute resolution and, accordingly, condemn the present violence in Ukraine by all sides. With respect to the US and Western response, we express specific concerns regarding:

YAY GAY DADS!!! BROS is now on demand so watch it on your damn couch this weekend! https://t.co/RGMhMZJnHW

Christina Aguilera - I Will Be

Protesters To Be Given Tracking Chips!

Finding friendship and strength through basketball

WARNING: The Threat Of Nuclear War Is Real

Kerry Washing and Jasiri X 1HOOD | Street You Grew Up On

Why Are States Undercutting Their Own Workers? | The Problem With Jon Stewart

BROS is the number one comedy on iTunes and the 3rd most popular movie overall after Top Gun and Bullet Train! Watch it this weekend! #BrosMovie pic.twitter.com/7br9EDFSne