Spy master Mustafa al-Kadhimi is Iraq's current prime minister who has accomplished nothing since he was officially named prime minister on May 7th.  He's uttered a lot of words and he just completed a little jaunt through Europe but he's done for the Iraqi people.  Saturday, despite his claims to want to address the issues raised by the protesters and to want to protect them, he turned his forces loose on them.  Again.  Qassim Abdul-Zahra (AP) reports:

Iraqi security forces on Saturday cleared out sit-in tents from the capital’s central square that has been the epicenter of the anti-government protest movement, a year after the eruption of demonstrations against corruption led to months of clashes with authorities across Iraq.

More than 500 people were killed during the months-long protest movement, many of them demonstrators shot by Iraqi security forces.

It's all so passive.  They 'cleared' it.  But it wasn't empty.  Is that too much for the press to note?

Protesters were present.  Tents were burned down.

Is that what we're to call it?  The people are disrespected and terrorized and we're going to let the powerful responsible for that define the assault as "clearing"?

What a wonderful world, indeed.

If you're not getting it, let's note this photo of the 'clearing' from ALSUMARIA. 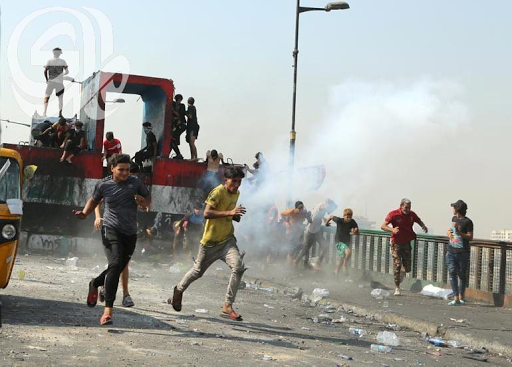 They send in security in riot gear, they intimidate the protesters present and burn down their tents but, hey, it's just a 'clearing.'  The reports fail to note that the militias tried the same thing -- 'clearing' -- on Tuesday with no success.

AL MADA quotes Baghdad activist Nasser Hamid stating that the path is a long one and that the idea of change is not one that we'll die.  Activist Mohammed al-Hasani echoes Hamid and notes that the protest is part of the people's movement and that it will not be stopped.

It's not going to be easy, Mustafa's attempt to kill the movement.  It's not going to be easy and it may end up taking him down.  If it does, he'd be the second sitting prime minister toppled by this movement.  His actions come as international observers are starting to notice what Arabic social media commentators began noting in June: Despite Mustafa's claims that he just wanted to get in and out as prime minister, that he was just there to set up elections next June and then depart, Mustafa is clinging to power and wants to remain prime minister beyond June 2021.   Poor Mustafa, his attack on the protest movement is not a way to win votes.

I mean, he may be going for presenting himself as an 'authoritarian' (bully) leader but can he out-bully Nouri al-Maliki, I doubt it.  And even this attempt by itself is already backfiring.  You're seeing social media posts in Iraq from people who really weren't weighing in on the protests before.  But now that the square in Baghdad has been attacked -- that's the term being used, not cleared -- you're seeing posts asking who was being harmed by the protesters, asking why this action was deemed 'necessary'?  All that he's accomplished is managing to push people who were on the fence about the protesters off the fence and over to their side.

Sadly for Mustafa al-Kadhimi, the current prime minister of Iraq, not only has his action in Baghdad led to him being compared to forever thug and former prime minister Nouri al-Maliki, it's also alerted others.  We'll note this Tweet:

Nasiriyah is not taking it 'in stride.'  They are standing up and that's only a surprise if you count on western media to cover Iraq.  Nasiriyah is always too far from a media center for any western press to ever be too concerned about.  AL-NASIRIYAH reports that families of the protesters have warned there will be pushback on any attempt to end the ongoing sit-in in Al-Haboubi Square.  They have called for the local police to protect the protesters.  In response, Brig Gen Hazem al-Waeli (commander of Dhi Qar Province's police) has issued a statement that no outside security forces are coming into the province and that the province's security can and will protects its citizens.

Mustafa's actions inspired Saturday's actions in Nasiriyah.  ALSUMARIA reports that dozens organized and marched this morning in the square.

It's amazing how the western press misreports.  Earlier this week, it was 'concern' for the people in camps -- the displaced in Iraq.  Supposedly, everyone, including the UN was concerned.  I ignored the story because it felt false on the face of it.  And it was.  DAR ADDUSTOUR gives you the truth about this 'concern' that western media left out.  The 'concern' is only that they exist.  The 'concern' doesn't translate into finding homes for the displaced or meeting the needs of the displaced.  What the 'concern' means, DAR ADDUSTOUR reports is that the camp in Baquba, the sole camp for the displaced, will be closed in five weeks.  150 families will be evicted from the camp.  Where are they to go?  No one cares.  Certainly, no one in the western press cares because they couldn't take a moment from acting as a megaphone to tell you what was really going on.  Again, just on the face of it, it was obvious that there was no 'concern' for the displaced.

Glenn Greenwald RESIGNS From The Intercept

Our Favorite Media Screwups: Is This Chuck Todd's Most Embarrassing Question?

Krystal Ball and Saagar Enjeti react to Chuck Todd's statement that "when you look at both candidates, in some ways one not taking the virus seriously enough at all; and one, if there’s a criticism, might be, is he taking it too seriously?” About Rising: Rising is a weekday morning show with bipartisan hosts that breaks the mold of morning TV by taking viewers inside the halls of Washington power like never before. The show leans into the day's political cycle with cutting edge analysis from DC insiders who can predict what is going to happen. It also sets the day's political agenda by breaking exclusive news with a team of scoop-driven reporters and demanding answers during interviews with the country's most important political newsmakers. Follow Rising on social media: Website: Hill.TV Facebook: facebook.com/HillTVLive/ Instagram: @HillTVLive Twitter: @HillTVLive Follow Saagar Enjeti & Krystal Ball on social media: Twitter: @esaagar and @krystalball Instagram: @esaagar and @krystalmball

#TheJimmyDoreShow Glenn Greenwald RESIGNS From The Intercept Over CENSORSHIP!