Further steps towards war on Iran 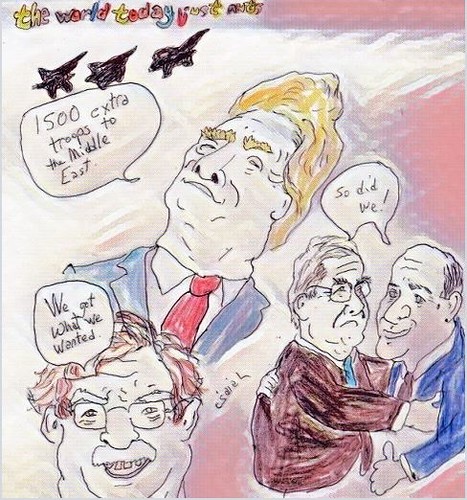 As Isaiah's THE WORLD TODAY JUST NUTS "1500 Extra" observed this morning, Donald Trump is sending 1500 more US troops to the Middle East. THE GUARDIAN reports:


The US will send hundreds of additional troops and a dozen fighter jets to the Middle East in the coming weeks to counter what the Pentagon has said is an escalating campaign by Iran to plan attacks against the US and its interests in the region.
And for the first time, Pentagon officials on Friday publicly blamed Iran and its proxies for recent tanker bombings near United Arab Emirates and a rocket attack in Iraq.


For anyone confused, no there's no proof that the rocket attack in Iraq -- an attack on the Green Zone, actually -- was an attack on the US Embassy in Baghdad.  And no group has claimed responsibility.


As for claims of an attack by the Iranian government on US tankers?  Jacob Hornberger, of the Libertarian Future of Freedom Foundation, advises that everyone remember previous bogus claims regarding attacks on the USS Maine, the USS Arizona and the USS Maddox.  Regarding the last one:


In August 1964, U.S. military officials stationed U.S. vessels off the shores of North Vietnam. They announced that North Vietnam had suddenly attacked the USS Maddox. Of course, no one bothered to ask why U.S. vessels were stationed at that particular location instead of back in the United States. All that mattered was the commies had attacked the United States and were now coming to get us.
It turned out to be a complete lie, a concoction designed to secure approval from Congress to send hundreds of thousands of troops, many of them conscripted, to Vietnam to ensure that the Reds didn’t come and take over the United States. By this time, U.S. presidents were openly ignoring the congressional declaration-of-war requirement in the Constitution. But Johnson, the Pentagon, and the CIA still wanted congressional approval and funding for their war. The fake attack at the Gulf of Tonkin enabled them to secure the “Gulf of Tonkin Resolution” from Congress, which enabled them to embroil the U.S. in a land war in Asia that they ultimately lost, at the cost of almost 59,000 American men.


War has consequences.  War leaves destruction.  It's something a rah-rah press tends to forget.


Ranj Alaaldin, of the center-right Brookings Institute (which promoted the war on Iraq) shares, "Tensions between the United States and Iran are escalating rapidly, particularly since U.S. warships were dispatched in response to reported threats against U.S. forces in Iraq from Iran and its proxies. The U.S. has withdrawn all non-emergency embassy staff from Iraq and, on Monday, a mortar attack by Iran’s proxies in Baghdad, striking in the vicinity of the U.S. embassy, raised the prospects of a conflict on Iraqi soil even further."  In addition, RUDAW reports, "US troop deployments to the Middle East could provoke Iran to blockade the strategic Strait of Hormuz, causing chaos for global oil markets, Iraq’s oil minister warned Saturday."


Mamoon Alabbasi (ARAB WEEKLY) reports that warnings have come from many Iraqi officials:

Shia cleric Muqtada al-Sadr said any party that drags Iraq into the US-Iran conflict “would be the enemy of the Iraqi people.” He said such a conflict “would mark the end of Iraq” at a time “we need peace and reconstruction.”
Head of the Iran-backed Badr Organisation, Hadi al-Amiri, called on Iraqis to work “to keep Iraq and the region away from war. If war breaks out… it will burn everyone,” he warned.
The leader of the Iran-backed Asaib Ahl al-Haq militia, Qais al-Khazali, said he was opposed to any action that “gives pretexts for war” because they would only “harm Iraq’s political, economic and security conditions.”

The Kataib Hezbollah militia said the rocket attack was “unjustified,” suggesting a third party was seeking to provoke war.

David M. Witty‏ @DavidMWitty1 20h20 hours ago
In Iraq, report of popular protest in Basra against US escalation with Iran. Calls to end US presence in Iraq. http://mobp.as/jijdp
0 replies2 retweets4 likes

Silvia S. Castello.eu‏ @GlobalTimes_eu 22h22 hours ago
Silvia S. Castello.eu Retweeted Middle East Eye
Thousands of supporters of a Moqtada al-Sadr, demanded the country's government stay out of any potential conflict between Iran and the United States. Protesters chanted "no to war" and "yes to Iraq" in central Baghdad and the southern city of Basra, Reuters reported on Friday.

In the US, Senator Bernie Sanders is one member of Congress who has called out a war on Iran.  Rachel Maddow's little buddy, War Whore Bill Kristol, took to the pages of -- where else? -- THE NEW YORK TIMES to attack Bernie.  Bernie's response?

US House Rep Tulsi Gabbard has also loudly called out war on Iran.