As PRESS TV notes, the protests in Basra go on.  Among the reasons for the ongoing protests -- which started in July -- is the water issue.  Over 150,000 residents of the area have ended up hospitalized for drinking the local water.  Potable water is a right, not a luxury.

Water is an issue throughout Iraq.  For example . . . 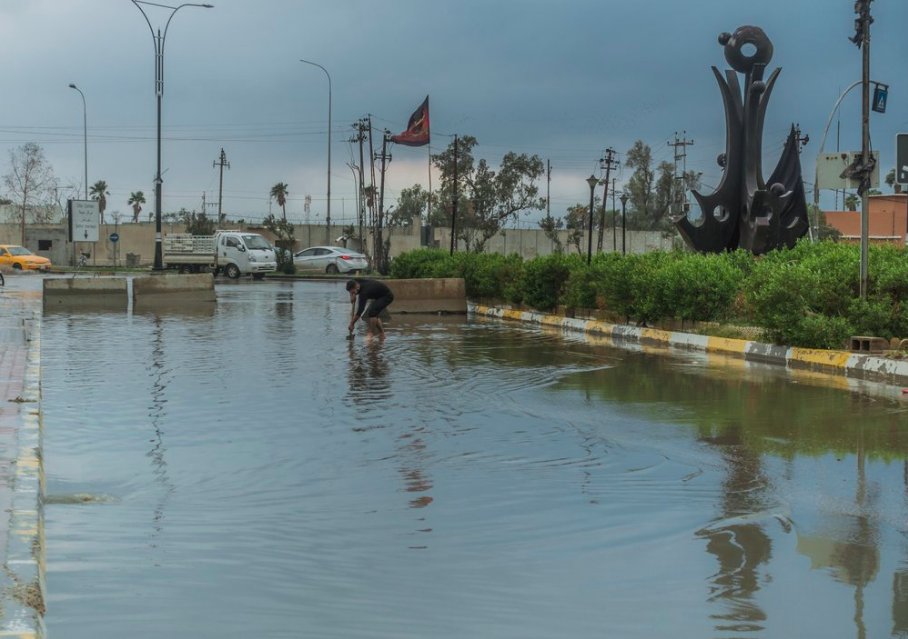 Among the reason for water problems in Iraq today?  Pollution, to be sure.  Back in October, Philip Issa (AP) observed that the Tigris River "is foulded by untreated sewage and dead carp, which float by in the fast-moving current." Equally true, neighbors who block off the water flow through Iraq.

Turkey has appointed former Forestry and Water Affairs Minister Veysel Eroğlu as a special envoy to Iraq to resolve the water sharing issues between the two countries. During a press conference with the Iraqi President Barham Salih last week, President Recep Tayyip Erdoğan said there were serious water management problems between Iraq and Turkey but some necessary steps could solve the issues within a couple of years. Erdoğan said that he would send a special envoy to Iraq to talk with officials and take the necessary steps.

The Iraqi president said: "We do not want water sharing issues to remain a source of problems between the two countries," and added that Erdoğan's move to appoint a special envoy would be a significant step toward solving the issue.

So Turkey's going to decide what a "fair share" of the water is for Iraq?  Is that it's supposed to work?  Let's hope not.  And let's hope that people grasp how important water issues actually are.  Bryan Bowman's report for GLOBAL POST touches on this importance:


Poor water infrastructure and droughts related to climate change lead to mass unemployment and desperation among farmers in northern Iraq in 2014, leading some of them to become prime targets for ISIS recruitment.
While many other factors contribute to conflict, [PAX researcher Wim] Zwijnenburg said he hopes people understand that there is a connection between a stable environment and national security.
“Environmental grievances can breed resentment and be exploited by local groups,” he said. “So I think it’s critical to think about environmental security and protection of civilians as being interlinked.”

Back to Basra, the protests aren't the only issue.  Mustafa Saddoun (AL-MONITOR) reports:


Amid ongoing protests in the southern Iraqi province of Basra, where citizens have been facing poverty and a critical lack of basic services, another dispute is emerging, this one over the governor’s position. This new controversy threatens to escalate the ongoing discord between political blocs there as the Basra provincial council feels pressure from outside sources seeking to sway its members' votes.
Political blocs realize that winning governors' positions locally could pay off later in national elections. Some observers say this competition has become an even more difficult struggle than the prolonged fight over selecting the country's prime minister. The blocs are worried this extended struggle for governor could inflame protests over the already hot topic of public services.
Ammar al-Hakim, leader of the Hikma bloc (National Wisdom Movement), a Shiite party with 19 seats in parliament, is competing for the position. He talks about “business deals and interests-based agreements behind the scenes.” He also stresses the need to “get rid of foreign interventions that affect the choice of governor.”
Commenting on Hakim’s allegations, a political source close to the government in Basra told Al-Monitor about an unprecedented level of Iranian pressure to assign this position to a member of the State of Law Coalition led by Nouri al-Maliki or the Fatah Alliance led by Hadi al-Amiri.
“Meanwhile, Muqtada al-Sadr's Sairoon Alliance and the Hikma bloc led by Hakim have another say,” said the source, who spoke on condition of anonymity. “The Iranian Consulate in Basra leads the negotiations on behalf of some political blocs. The consulate also interferes in all negotiations, contacts candidates and tries to win them over to its side. This intervention is different from all previous Iranian interventions. This time, Iran is getting into details and disbursing funds to some members of the provincial council to win their vote.”

Ann's Mega Dub
Peace has to be patterned
10 hours ago


Exhibition Schedule
Exhibitions of photographs are scheduled for the following venues and dates:

Micah Zenko breaks it down (or Pay Attention, Peter Baker, you need to be more than a pretty face)