The Mosul Slog didn't end with the start of Ramadan

A day of deaths.

Zbigniew Brzezinski, neocon who helped lie us into the Iraq War, is no more Press S to spit on his grave

In addition, ALSUMARIA reports 2 people died in a Falluja bombing, and 1 corpse was found in the streets of eastern Baghdad (shot to death).  Also an attorney and his son were kidnapped in Kirkuk.


Meanwhile, BBC NEWS reports, "Iraqi security forces have launched a new assault on Islamic State (IS) militants in the city of Mosul. Troops say they made gains in a few hours as they try to drive rebels out of the last remaining strongholds in Mosul's Old City they still control."

#Iraqi forces advancing on 3 mutiple fronts against #ISIS in the final battle in #Mosul. 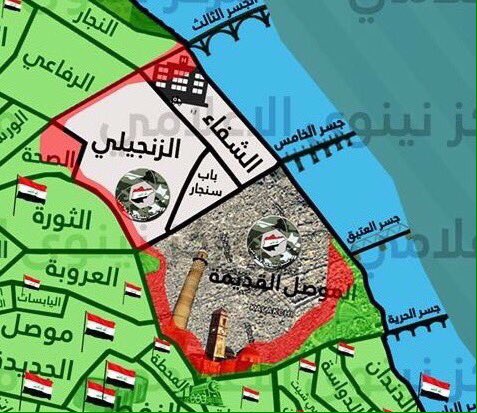 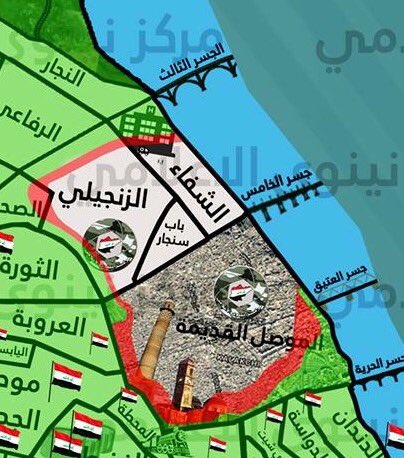 
By the way, Grand Ali al-Sistani announced today was the first day of Ramadan.

Hey remember when they insisted that they would wrap this up before Ramadan?

Lieutenant-General Othman al-Ghanimi, Iraq’s chief of staff, was insisting this would happen back on May 13th, remember?

Need another example?  AL-ARABIYA, May 11th:

The Iraqi Ministry of Defense has announced that the entire Mosul area will be under control before Ramadan.


This announcement came through army Chief Osman al-Ghanmi during his inspection of the operations taking place against ISIS in the city of Mosul.

Didn't happen, did it?

NINA reports that Iraq's Vice President Ayad Allawi wished this Ramadan would see the end of terrorism and national reconciliation in Iraq. 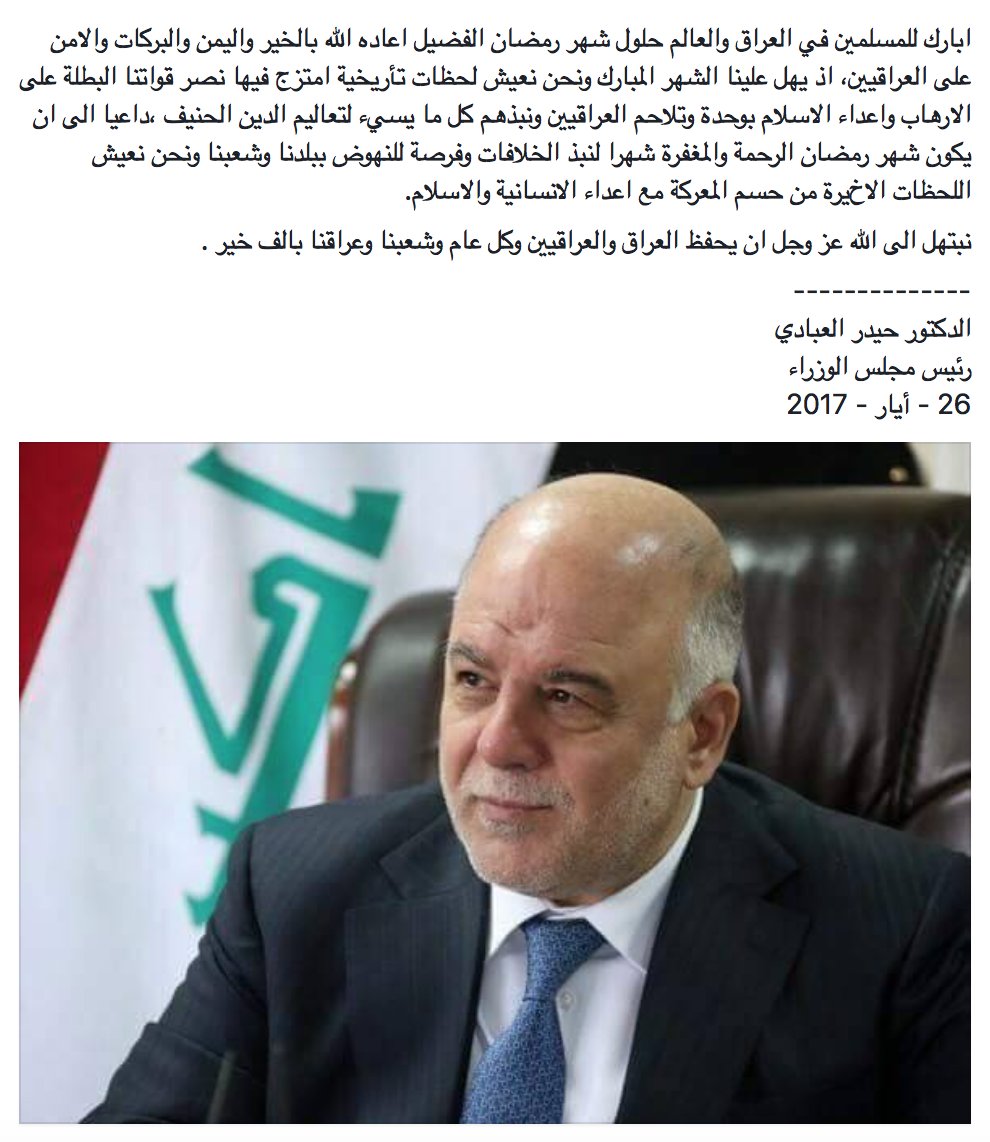 And the US State Dept Tweeted:


And on the day after the Islamic State is defeated, what then?

The videos and photographs that have emerged of Iraqi soldiers from the Interior Ministry’s elite Emergency Response Division brutally taunting, torturing and executing alleged supporters of [the Islamic State]  (also known as ISIS or ISIL) and their family members had an eerie, distressing familiarity. In the course of Iraq’s tragic modern history, we have witnessed so many Iraqi citizens enduring the ugliest of assaults at the hands of combatants wearing a variety of uniforms.


The torturers depicted in these recent videos seem to borrow from their grotesque predecessors. We see Saddam-era tactics, as officers hang by their arms one of two brothers alleged to support [the Islamic State], then tearing out both their beards, putting a knife to their ears and shocking them with live wires. The videos show officers beating shackled detainees hanging from a ceiling, while the officers joke and jostle among themselves and casually record their atrocities, reminding us of the vile images of United States soldiers at Abu Ghraib prison. We also see soldiers summarily executing handcuffed detainees as “revenge,” like so many post-Saddam Iraqi forces fighting armed groups. And taking a page from [the Islamic State] itself, Iraqi officers bizarrely force one detainee to recite the pledge of fealty to the [the Islamic State] leader before reportedly murdering the detainee. In all these incidents, the Iraqi soldiers show little shame or fear in their vile actions, which they appear to relish recording and sharing on cellphones.


Some would argue it is.  (I would.)  Others disagree.


The Kurdistan Regional Government (KRG) Representative in Washington, DC said the West and the US are blinded by the “one Iraq” policy.
During a speech at a University of Kurdistan-Hawler (UKH) conference, Bayan Sami Abdulrahman, the KRG representative in the US, stated America and the UK ignored the warning signs in the Iraqi constitution as the role of Kurds and Sunnis diminished in Baghdad.
[. . .]
“The election system was changed so that today it does not matter the turnout; it does not matter how many Shia and Kurds will vote in the Iraqi elections,” Abdulrahman emphasized.
“The Shia will always be the majority, [and] the Kurdish parties are essentially competing among themselves and not allowed to compete nationally,” she continued.

The Kurdish diplomat called the US’ belief in the one-Iraq policy a “fiction,” stating that “Iraq is not one, it has never been one.”

Dropping back to Friday's snapshot:


March 17th the US bombed a building in Mosul.  Civilians were inside.  There have been many attempts to confuse the issue -- I've sat through two Congressional hearings alone where members of Congress offered conspiracies -- but the reality is that civilians were killed.  Now?

BBC NEWS notes, "The United States has admitted that at least 105 Iraqi civilians were killed in an air strike it carried out in Mosul in March."  The Pentagon is saying they killed two snipers and that they were the targets of the strike; however, AP explains "several residents of the Mosul neighborhood told The Associated Press on Friday there were no IS fighters or explosives inside the house struck by the U.S. bomb."

That news surfaced late Thursday.  John Haltiwanger (ELITE DAILY) tracked trends online and noted that the news did not amplify on social media:


Is this is a sign of ignorance of what’s being done with U.S. tax dollars in the Middle East, or just indifference?
Perhaps it’s a mixture of both.
But there’s a strong case to be that made airstrikes that kill civilians aid the cause of terrorist organizations like ISIS.


In real time, in the US, it briefly made the news in a "Donald Trump increased the killings!" type of way.  Meaning that members of the so-called 'resistance' (firmly in debt to the centrist core of the Democratic Party) promoted it as an example of Bad Trump.


ALSUMARIA reports the head of the Iraqi Parliament's Security Committee disputes the US claim and insists that there was no bomb dropped on the building but that the US blasted it with a tank and that they are lying about it because they do not want to admit how involved in on the ground combat they are.

Gregg Allman has passed away.

He leaves behind so much damage.

And that's before you get to his mid-age years where he sleeps with and abuses then under-age Shannon Wilsey.


(Yes, I know the lies he 'wrote' in his autobiography -- he wasn't just a piece of s**t, he was a lying piece of s**t.  For those who would trust the drug addicted flame out Gregg, click here for Shannon's father explaining when the relationship started.)

NATO is an imperialist project. It needs to disappear (Margaret Kimberley)

Black Agenda Report‏ @blkagendareport  May 25
http://bit.ly/2qUfuJa  When it comes to #Deportation stats: #Obama was like MJ on the Bulls squad #Trump is like MJ, too, but on the Barons 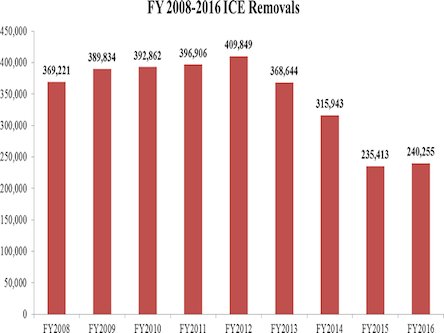