As we've been noting for over a half-a-year now, Shi'ite cleric Moqtada al-Sadr is no longer a movement leader.  He has his cult still.  That's really all he has.  The people rejected him otherwise and did so when he aligned himself against the young Iraqi people and with the government of Iran.  His long slide into oblivion continues.  His cult has assaulted peaceful protests in Nasriya.  Qassim Abdul-Zahra (AP) reports:

Supporters of a firebrand Iraqi cleric shot dead five people on Saturday, according to medical officials, in overnight clashes with anti-government protesters in southern Iraq.

The anti-government demonstrators attempted to bloc the path of a rally supporting Shiite Muslim leader Moqtada al-Sadr. Followers of the populist cleric also wounded 40 others in the clashes, according to two medical officials.

AFP notes that not only were protesters shot at but that Moqtada's cult also stands accused of torching tents.  They also note that the death toll has risen to six murdered by Moqtada's cult.  That number may rise again since "dozens" were wounded by the cult shooting at them.  Azhar al-Rubaie puts the number injured by the shootings at 50.  Western media is also portraying it as just something that somehow happened.  That's not the case.  Moqtada's cult brought guns in and planned to shoot it up.  They attacked the protesters and planned to destroy their tents.  Basra journalist Mohammed Qasim Tweets:

#Muqtada al-Sadr’s militia mixed alcohol with the #Rainbow flag, meaning that homosexuals and #alcohol are corruption and must be eliminated, and this is a public violation of #human rights. 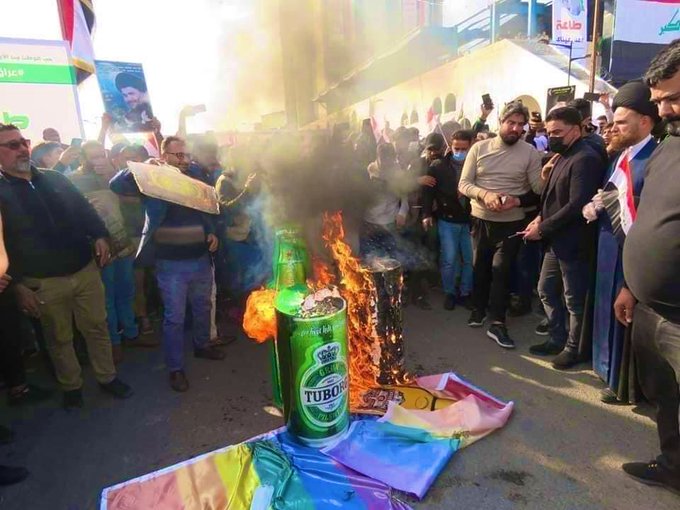 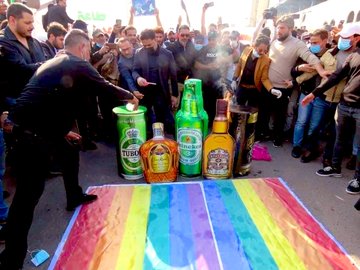 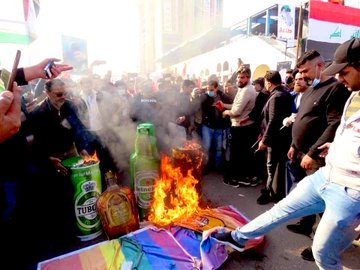 Moqtada's cult didn't just happen to have those oversize props on them.  This was a planned assault.  Not only does the Iraqi government need to disarm his goons, they need to put them on trial.  Equally true, it was not necessary for the cult to enter the town square (al Haboubi square) -- where the peaceful protesters were -- and have been for over a year -- in order to get to any destination. They chose to enter that square, they did so with props and they did so with guns.  And they chose to enter the square in "four wheel drive vehicles."  This was not a 'clash,' it was a planned assault.

I condemn the violence against protesters in Nasiriya and other cities. There can be no justification for such senseless killing. I call on the Iraqi authorities to protect peaceful protesters from attacks, and to bring to justice those responsible.

The US Embassy in Iraq Tweeted:

The United States condemns the violence against peaceful protestors that took place in Nasiriyah, Dhi Qar today. These unjustifiable acts of violence have no place in a democracy. 1/2

The United States joins the international community in calling for those responsible to be held accountable, and for the government to provide protection for protestors and others engaged in the legitimate exercise of free speech. (2/2)
12:08 PM · Nov 28, 2020

Sensing the hear, Moqtada has attempted to back pedal.  John Davison of REUTERS Tweets:

Muqtada al-Sadr tells protesters to go home and for the government to do what’s necessary to keep security and deal with them, after his supporters began clashes that have killed at least 7 demonstrators in Nassiriya #iraq
Quote Tweet 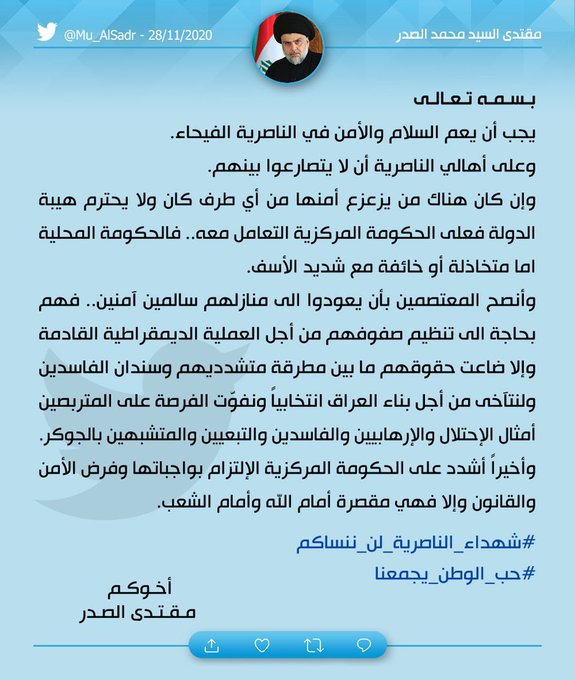 And he's said to have fled the country, departing the airport in Najaf for Beirut.  That is his long-standing pattern -- flee the country whenever he thinks he might be arrested.

As Moqtada continues to lose public support, he's facing a new threat.  Remember that Moqtada didn't do anything to have his cult.  His father died and Moqtada took over.  Now there's a rise in supporters of his late father who are saying Moqtada Ghaith Altamimi Tweets the following three items:

Circulating for the past couple of hours ..A Movement call themselves Ansar al-Sadr Reform Movement. They claim they're followers of Muqtada's late father and adherents of his Marja'iyah; however, they repudiated Muqtada al-Sadr for his duality and trend against...

the teachings of his father..and that Muqtada al-Sadr is after worldly gains and spoils under the bogus cover of reform. They also referred to how Muqtada's followers under his command killed 5 protesters in al-Haboubi Square and seriously wounded 80 more..referencing...

to how Muqtada al-Sadr via his Saleh Muhammed al-Iraqi account incited cold-blooded killings of protesters .. and concluded that they will remain followers of his father's Marja'iyah, but disavowed Muqtada being pariah and a deviant from his father's preachings..

Moqtada's cult is not being silent, they are threatening those who speak out against their false idol.  Hayder Tweets:

Sadrists are threatening anyone who speaks against Muqtada Al-Sadr or his political party to blast their houses at night with sound IED bombs. This has already happened numerous times this past month under

Krystal Ball and Host of the Katie Halper Show, Katie Halper, discuss Gov. Cuomo's Emmy nomination and Aaron Rupar's pushback against David Dayen's reporting on Biden's cabinet picks. About Rising: Rising is a weekday morning show with bipartisan hosts that breaks the mold of morning TV by taking viewers inside the halls of Washington power like never before. The show leans into the day's political cycle with cutting edge analysis from DC insiders who can predict what is going to happen. It also sets the day's political agenda by breaking exclusive news with a team of scoop-driven reporters and demanding answers during interviews with the country's most important political newsmakers. Follow Rising on social media: Website: Hill.TV Facebook: facebook.com/HillTVLive/ Instagram: @HillTVLive Twitter: @HillTVLive Follow Saagar Enjeti & Krystal Ball on social media: Twitter: @esaagar and @krystalball Instagram: @esaagar and @krystalmball

50% Off All Ms. Memberships This Weekend Only!