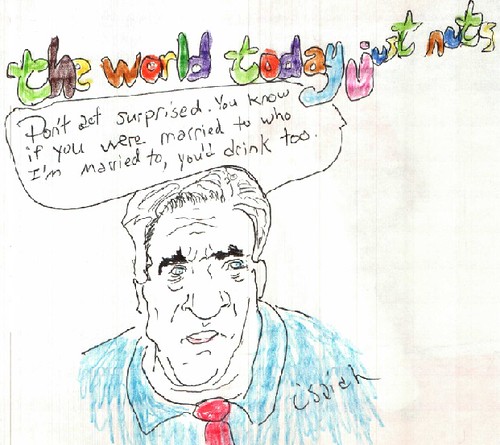 Other people's stories shouldn't be seen as a threat to you

Pride month makes no sense. You have all your rights, now SHUT UP. Your sexuality is not an accomplishment. Leave everyone alone and stop projecting your insecurity.
0:31
477.4K views
9:17 AM · Jun 2, 2022

I don't know Chrissy Walker.  Watching his video, he appears highly femme so possibly he's been confused for gay by some people and it's really hurt his feelings.

But here's the reality: For a long, long time, LFBTQ people have been persecuted.  That's by the government, that's by the medical profession.

There is no reason in the world not to have pride in people being heterosexual.  But it's not an either/or.

Pride Month is about equality.  It's about righting a historical wrong.  It's about people who have been attacked persecuted, killed, 'treated' for their sexuality getting a month that says there's nothing wrong with you.

Because there is nothing wrong with you if you're gay or straight or bi or whatever.

But our government (the US) and our medical system spent decades persecuting and shaming and harming.

Gay pride is about restoring fairness and equality

There's no reaon for little Chrissy to have his hissy fit -- it is fun to watch though, that video where he thinks he's so tough and he's minicng around hruling nasty.  He is a joke to laugh at.

Taking a month to celebrate pride in our friends who deserve every right at happiness and fairness is not harming anyone and its restoring balance.  Black History Month is not about saying that White people don't matter.  It is about restoring balance and respsecting the hardships and accomplishments our ancestors endured and made -- against huge barriers and discrimination.  It's about balance and fairness.

We are all human beings and we need to be celebrated.  But our history has tended to celebrate only those who most resembled -- in looks and actions -- whomever occupied the highest position in society.  Those that didn't got discriminated against.

I have no idea why Chrissy is threatened by celebrating a part of our humanity.  But we need to do this and we need to make sure that all members of the human race feel included, feel valued.  And we need to be smarter which means going beyond the limited stories that were told to most of us in history.  Too many voices were shut out.

Even Chrissy should grasp that he is smarter because other people stepping forward and sharing stories that were ignored in earlier times.

We all grow from someone stepping forward and saying, "This is what happened."  It takes out of our comfort zones (and we all have them) and teaches us a little more about the actual world we are living in.

I don't understand the need to feel threatened by someone else having the microphone.  Listening is as important as speaking -- if not more so.  And you increasing your knowledge base because someone is kind enough to share their story with you is something you should be thankful for.

For someone who has been oppressed or erased, sharing can be very liberating.  For someone who never knew what that was like, it can be very informative.  It can be enriching for both parties.  Unless you've reached some stage in life when you don't wish to know more and you have no interest in anyone other than  yourself.

October 10th, Iraq held elections.  The government is still lacking a prime minister and a president.  June 10th, it will be eight months since the elections.  RUDAW reports:

Iraq's prime minister candidate Mohammed Jaafar al-Sadr urged the necessity to implement and abide by the Iraqi constitution to address the current political turmoil engulfing the country and rendering it unable to form its next government.

"We must return in earnest to the origins of the state-building project, the constitution, of which we wrote with the acceptance of it by the majority of people through an elected assembly," Jaafar wrote in an op-ed sent to Rudaw on Saturday, calling on the country's different political alliances to implement the constitution and use it as a basis to resume the stalled government formation process.

Jaafar, picked as a candidate by the repatriate's alliance for the PM post, said that Iraq's different alliances "stumbled" in the constitution's application, and the errors previously committed have made the process of state-building difficult, despite the document containing all the concepts needed to build the country.

He listed the stubbornness of politicians by "clinging to narrow fictional demands and trying to evade the entitlement [of applying the constitution]" as examples of faults committed by the political forces which have drastically deterred proper government formation.

Mohammed, of course, has been proposed for prime minister by his cousin cleric and cult leader Moqtada al-Sadr.

As the 'government' dithers on, climate change continues to show its impact on Iraq.

In the video above, Osama Bin Javaid (ALJAZEERA) reports on the drought harming Iraq's wetland in southern Iraq ("believed to be the Biblical Garden of Eden") .  Iraq's suffering, be great if the world could focus on -- especially the western world which has done so much to harm Iraq.

In other news, ECNS reports:

The Iraqi-Chinese Friendship Association on Saturday held an event here [Baghdad] to celebrate China's traditional Dragon Boat Festival, as part of its efforts to promote cultural exchanges between the two countries.

Attended by Chinese Ambassador to Iraq Cui Wei as well as representatives of Chinese companies based in Iraq and the Iraqi government, the event included a show of Iraqi folk costumes and traditional Iraqi songs, and a presentation about the making of Zongzi, a traditional Chinese delicacy wrapped in bamboo or reed leaves for celebrating the festival.

"We wanted to convey the feeling of love and the Chinese folklore to the Iraqi people, and at the same time we conveyed Iraqi folklore to the Chinese people (in Baghdad)," Haider al-Rubeiy, head of the Iraqi-Chinese Friendship Association, told Xinhua during the celebration.

The Truth About The Tiananmen Square Massacre That Wasn't/Can We Vote Out Fascism?

He's EXPOSING the truth in Ukraine, and they don't like it | Redacted Conversation w Larry Johnson

a photographer's lens on "more than a wall"

Daughters for Earth: Women and the Climate Change Movement