As noted in Friday's snapshot, protesters came together in Baghdad.  This is The October Revolution and it is still ongoing. So are the attempts by Iraq's security forces to harm them.  There are reports of the protesters being beaten on Friday.  Some are noting a 'lower' turnout on this anniversary than last year but they're failing to note that security forces were posted to prevent the gathering from becoming as large or larger.

Two years ago today, protests erupted in Baghdad, leading to an unprecedented movement in Iraq. Masses of people from a multitude of religions, social classes, and political standings aimed to take back their nation devastated by wars, foreign intervention, and corruption. (1/2) These peaceful protesters were met with tear gas, live ammunition, and other deadly weapons by their so-called government. Up to 1,100 people were killed for demanding the most basic of rights. Two years later, we still want our homeland back. (2/2) #سنتين_وبعدنا_نريد_وطن Hundreds of #Iraqis have taken to the streets in #Baghdad to mark two years since fierce protests roiled the #Iraqi capital, fuelled by anger over corruption and unemployment.

In the midst of a heavy security presence, the demonstrators, who began marching towards Tahrir Square, the center of the 2019 protests, raised Iraqi flags and pictures of young men killed during the bloody repression of the demonstrations at the time, killing about 600 people and wounding more than 30,000.

The banners also included pictures of activists who were later killed, such as Ihab al-Wazni, head of the protests coordination in Karbala, who was shot dead in May by armed men in front of his house with silencer pistols.

Others held banners reading “When will we see the killers behind bars” and “We want a homeland, we want change”, while the demonstrators are still calling on the government to hold those responsible for the assassinations of activists accountable.

Friday’s demonstrators also raised banners reading “Electing the same faces is a massacre for the homeland,” “No, no to corrupt parties, no to corrupt politicians,” and “Do not elect the one who killed me.”

Brandishing Iraqi flags and portraits of “martyrs”, they marched to Tahrir Square, an epicenter of the 2019 revolt, surrounded by a large number of riot police, AFP correspondents said.

“When will we see the killers behind bars?” and “No to corrupt parties, no to corrupt politicians,” said placards carried by the demonstrators who included women dressed in black.

On October 1, 2019, widespread rallies erupted across Baghdad and the south of the country against a government seen as corrupt, inept and beholden to Iran.

The most striking thing about these small protests are the parents who come to commemorate the children they lost. For every slain protester there are relatives left behind in grief and, often, deepening economic misery. “We live with the pain everyday,” a mother, Fatima, said.
5:49 AM · Oct 1, 2021

With heavy security presence in roads running up to Baghdad’s Tahrir Square tonight, we witnessed riot police grabbing several young men and appearing to beat them in the dark.
1:28 PM · Oct 1, 2021

Hundreds of Iraqis demanded justice for demonstrators killed during the 2019 October (Tishreen) protests at a rally in Baghdad on Friday, the second anniversary of the protest movement and just over a week ahead of parliamentary elections.

“This is my son. He went after his rights, his country … he was killed,” Muhamad al-Zubaidi, carrying a photo of his son, told Rudaw’s Dildar Harki.

The Tishreen protests condemned state corruption, failing public services, and high unemployment. They lasted several months and were met with violence and repression from state forces and militias backed by Iran that left at least 600 dead and thousands wounded.

And the ASSOCIATED PRESS reports:

Hundreds of riot police and federal policemen fanned out in Baghdad ahead of the planned march.

“We don’t want a paradise, we want a nation,” read one of the banners carried by protesters who gathered Friday at Fardous Square and marched toward Tahrir Square, the epicenter of the October 2019 protests.

Another banner read: “You will not silence the voice of Tishreen,” Arabic for October, as Iraqis refer to the protests after the month they broke out.

The early elections have only been scheduled because of the brave protesters. The October Revolution  kicked off protests in the fall of 2019 and forced the prime minister to step down and early elections to be announced.  As ARAB WEEKLY notes, "Tens of thousands of Iraqi youths took to the streets to decry rampant corruption, poor services and unemployment. Hundreds died as security forces used live ammunition and tear gas to disperse crowds."  This is what forced the resignation of one prime minister and has led to national elections which are supposed to take place October 10th.  (Members of the Iraqi military will vote October 8th.  Two election simulations have been carried out by the IEC and the third and final one will take place September 22nd.)   Charlotte Bruneau (REUTERS) notes that the candidates for Parliament include 951 women ("close to 30% of the total number of candidates") who are running for the 329 seats.  Halgurd Sherwani (KURDISTAN 24) has reported Jeanine Hannis-Plasschaert, the Special Representiative in Iraq to the United Nations Secretary-General Antonio Guterres, declared that Iraq's "Female candidates face increasing levels of hate speech, violence, and blackmail intended to force them to withdraw their candidacy."

Sinan Mahmoud (THE NATIONAL) counts 3,249 people in all seeking seats in Parliament  BROOKINGS notes this is a huge drop from 2018 when 7,178 candidates ran for office.   RUDAW is among those noting perceived voter apathy, "Turnout for Iraq’s October 10 parliamentary election is expected to be a record low, with a recent poll predicting just 29 percent of eligible voters will cast ballots." Human Rights Watch has identified another factor which may impact voter turnout, "People with disabilities in Iraq are facing significant obstacles to participating in upcoming parliamentary elections on October 10, 2021, due to discriminatory legislation and inaccessible polling places, Human Rights Watch said in a report released today. Without urgent changes, hundreds of thousands of people may not be able to vote.  The 36-page report, “‘No One Represents Us’: Lack of Access to Political Participation for People with Disabilities in Iraq,” documents that Iraqi authorities have failed to secure electoral rights for Iraqis with disabilities. People with disabilities are often effectively denied their right to vote due to discriminatory legislation and inaccessible polling places and significant legislative and political obstacles to running for office."  And Human Rights Watch Tweets:

“Every election day is the most depressing day for me,” said Suha Khalil, 44, who uses a wheelchair said she has never participated in an election. “Everyone goes to vote and I am stuck at home waiting for the day to end.” #IraqElection Take action: https://bddy.me/3optQAG 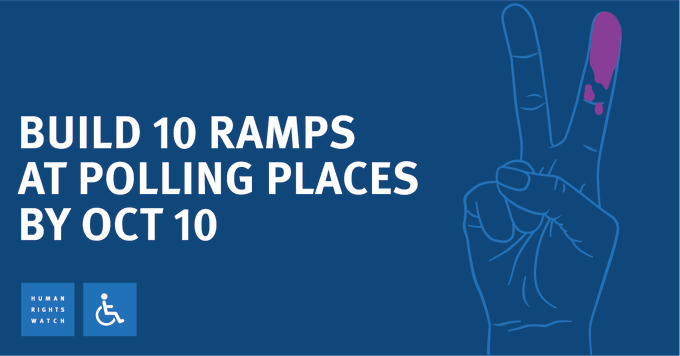 Another obstacle is getting the word out on a campaign.  Political posters are being torn down throughout Iraq.  Halgurd Sherwani  (KURDiSTAN 24) observes, "Under Article 35 of the election law, anyone caught ripping apart or vandalizing an electoral candidate's billboard could be punished with imprisonment for at least a month but no longer than a year, Joumana Ghalad, the spokesperson for the Iraqi Independent High Electoral Commission (IHEC), told a press conference on Wednesday."  And there's also the battles in getting out word of your campaign online.  THE NEW ARAB reported weeks ago, "Facebook is restricting advertisements for Iraqi political parties and candidates in the run-up to the country's parliamentary elections, an official has told The New Arab's Arabic-language sister site."

THE WASHINGTON POST's Louisa Loveluck Tweeted: of how "chromic mistrust in [the] country's political class" might also lower voter turnout.  Mina Aldroubi (THE NATIONAL) also notes, "Experts are predicting low turnout in October due to distrust of the country’s electoral system and believe that it will not deliver the much needed changes they were promised since 2003."  Mistrust would describe the feelings of some members of The October Revolution.  Mustafa Saadoun (AL-MONITOR) notes some of their leaders, at the recent  Opposition Forces Gathering conference announced their intent to boycott the elections because they "lack integrity, fairness and equal opportunities."  Distrust is all around.  Halkawt Aziz  (RUDAW) reported on how, " In Sadr City, people are disheartened after nearly two decades of empty promises from politicians."

How to address apathy?  Ignore it and redo how you'll count voter turnout.  RUDAW reports, "raq’s election commission announced on Sunday that turnout for the election will be calculated based on the number of people who have biometric voter cards, not the number of eligible voters. The move will likely inflate turnout figures that are predicted to hit a record low."  As for the apathy, John Davison and Ahmed Rasheed (REUTERS) convey this image:

Iraq’s tortured politics are graphically illustrated in a town square in the south, where weathered portraits displayed on large hoardings honor those killed fighting for causes they hoped would help their country.

The images of thousands of militiamen whose paramilitary factions battled ISIS hang beside those of hundreds of young men killed two years later protesting against the same paramilitaries.

After the election, there will be a scramble for who has dibs on the post of prime minister.  Murat Sofuoglu (TRT) observes, "The walls of Baghdad are covered with posters of Iraq’s former leaders, especially Nouri al Maliki and Haidar al Abadi, as the country moves toward its early elections on October 10. Both men however were forced out of power for their incompetence, and yet they are leading in the country’s two powerful Shia blocks."  Outside of Baghdad?  THE NEW ARAB explains, "However, in the provinces of Anbar, Saladin, Diyala, Nineveh, Kirkuk, Babel and the Baghdad belt, candidates have focussed on the issue of the disappeared and promised to attempt to find out what happened to them."

Shi'ite cleric Moqtada al-Sadr has 90 candidates in his bloc running for seats in the Parliament and one of those, Hassan Faleh, has insisted to RUDAW, "The position of the next prime minister is the least that the Sadrist movement deserves, and we are certain that we will be the largest and strongest coalition in the next stage."  Others are also claiming the post should go to their bloc such as the al-Fatah Alliance -- the political wing of the Badr Organization (sometimes considered a militia, sometimes considered a terrorist group).  ARAB WEEKLY reported, "Al-Fateh Alliance parliament member Naim Al-Aboudi said that Hadi al-Amiri is a frontrunner to head the next government, a position that can only be held by a Shia, according to Iraq’s power-sharing agreement."  Some also insist the prime minister should be the head of the State of Law bloc, two-time prime minister and forever thug Nouri al-Maliki.  Moqtada al-Sadr's supporters do not agree and have the feeling/consensus that,  "Nouri al-Maliki has reached the age of political menopause and we do not consider him to be our rival because he has lost the luster that he once had so it is time for him to retire."

In one surprising development, Dilan Sirwan (RUDAW) has reported: "Iraq’s electoral commission aims to announce the results of the upcoming parliamentary elections on October 10 within 24 hours, they announced on Thursday following a voting simulation."