US troops remain in Iraq.  In a rare reminder from the US press, Jonathan Jackson (NBC NEWS) reports:

Students at Mount Vernon Middle School are putting together more than a hundred care packages for soldiers in Iraq — all in support of their principal serving overseas.

Principal Darin Prince, a member of the Army National Guard, was deployed to Iraq before the school year started.

“He’s missing out on this whole entire school year, and our students and staff miss him so, so much,” said Taryn Brubaker, an art teacher at Mount Vernon Middle School.

To show their appreciation, Brubaker said students and staff originally put together a care package for Prince to ship ahead of the holidays. What was supposed to be a one-off thing quickly snowballed into packing dozens of care packages for the rest of Prince’s brigade.

“One priority box is $23 to ship, and we have raised the money to ship over 100 boxes, as well as fill them,” said Brubaker.

Teachers said it’s all thanks to the students and the Mount Vernon community that they were able to pull off such a feat.

Need more reality?  Moqtada al-Sadr is scum of the earth.  He leads a cult and, over the years, the US press has decided to go soft on him and present as a leader (he's not) and a kingmaker (never) instead of as the cheap ass thug he actually is.  He's flaunting his true colors again.  Daniel Stewart (360 NEWS) notes:

"I vow to confront homosexuality or the LGBTQ community through ethical, peaceful and religious means, against this violation of the innate characteristics on which humanity is built," according to a statement accompanied by his signature and posted on Twitter by his spokesman Salé Mohamed al Iraqi.

The cleric has reiterated his message by calling for the creation of an abolition of the alleged law of homosexuality in Iraq because "it cannot be a door to generalize this affliction".

In reality, homosexuality has been legal in Iraq for 20 years because the country does not have a law explicitly criminalizing it.

However, it does have a regulation prohibiting "immodest acts," probably the one Al Sadr was referring to, which Human Rights Watch has described as a "vague provision that could be used to target minorities."

Poor, dumb and uneducated Moqtada.  He can never by a religious leader above 'cleric' because he doesn't have the background and couldn't get it even when he ran off to Iran in 2007.  Poor idiot Moqtada.

If you were wondering what Muqtada Al Sadr thinks of the European fuel crisis, the war in Ukrain, and Inflation, well, you have an answer: it's caused by legalizing gay marriage. https://t.co/nElmqkGZiA

And, please don't forget, that two years ago, he explained 'the gay' caused other things as well:

People in Sadr city in #Baghdad which is full of Sadrists are not abiding by the rules & violating the #Covid_19 lockdown, therefore Iraqi army stationed in the area to force people to stop coming out. While Sadr blames gay marriage legalization for the spread of #coronavirus. pic.twitter.com/2xxmvVCsa2

And maybe those who've been stupid enough to promote Moqtada over the last three years could wake up to reality?

A civilian was killed and another one wounded Friday in Iraq's autonomous Kurdistan region in an attack likely carried out by Turkey, a local official said.

The pair were working on their land near the village of Mawat when they were killed in a bombardment "likely carried out by Turkey", the town's mayor Kamaran Hassan told AFP.

A third person has been listed as missing, he said, adding that he could not specify whether a drone or warplane had launched the strike.

I'm assuming the US media is ignoring this news because they don't think it's news since it happens so often.  Turkey is forever killing civilians in Iraq.  They pretend it's the PKK, they lie that it's the PKK, but it's civilians.

Title? This is "Reality slaps the Iraq fictions in the face" minus two sentences -- BLOGGER's censoring the post due to those two sentences.  Apparently, we can't call out Moqtada and his homophobia.  Good to know who BLOGGER/BLOGSPOT is in bed with.

Reality slaps the Iraq fictions in the face

This summary is not available. Please click here to view the post.
Posted by Common Ills at 10:02 PM

Talk World Radio is recorded as audio and video on Riverside.fm — except when it can’t be and then it’s Zoom. Here is this week’s video and all the videos on Youtube.

This week on Talk World Radio we’re talking about Honduras. Our guest Allison Lira is the Director of the Honduras Program for the Witness for Peace Solidarity Collective. Allison Lira holds a BA in Philosophy from the University of California, Santa Cruz and an M.Phil in Conflict Resolution and Reconciliation from Trinity College Dublin.

Get your station listed.

Please encourage your local radio stations to carry this program every week!

Please embed the SoundCloud audio on your own website!

Past Talk World Radio shows are all available free and complete at
http://TalkWorldRadio.org or at https://davidswanson.org/tag/talk-world-radio

The Peace Almanac has a two-minute item for each day of the year available free to all at http://peacealmanac.org 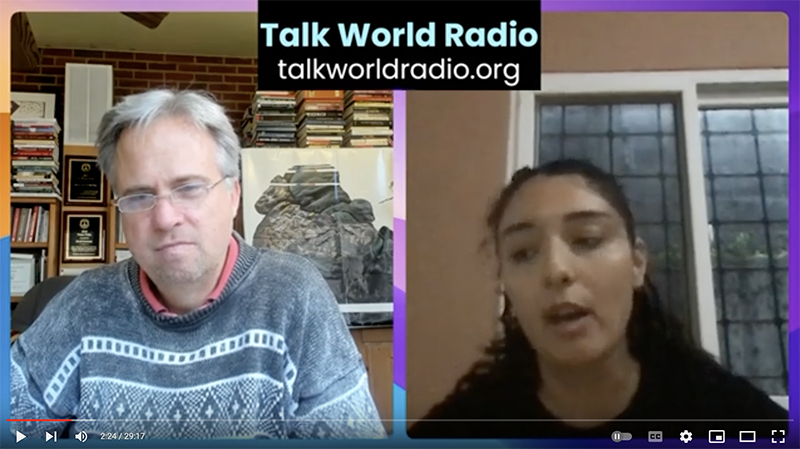 Biden Admin SCRAMBLES To Account For $20B+ In Ukraine Aid Ahead Of GOP Investigations: Report

The Holidays in Prison: You can make a difference