Tuesday, in the US Senate Armed Services Committee, War Hawk Shaheen argued against withdrawal of US troops from Afghanistan.  The tired and corrupt Senator Jeanne Shaeheen -- promoted by Amy Goodman, please remember -- said that an 'arbitrary timetable' could not be reason for withdrawal, it must be conditions-based.  Here's an option: Take your ass over there and set up your own checkpoint, Shaheen.

Throwing the kitchen sink against the wall, she further tried to use women as an excuse to continue the war.

Women?  How has the war helped women in Afghanistan?  It hasn't.  Bill Van Auken (WSWS) notes the 'help' the Afghanistan War has provided to Afghan women:

Aside from costing the lives of hundreds of thousands of Afghan women, the US war has left women, like the entire population, under worse conditions than when it began. Two-thirds of Afghan girls do not attend school, 87 percent of Afghan women are illiterate, and 70-80 percent face forced marriage, many before the age of 16.


She even stated that the senate had passed laws (actually, the Congress passes laws, a single chamber only passes a bill) that required women from these countries had to be at the table for decisions and negotiations.

How strange, isn't that?

This whole time women in Iraq are fighting for their rights and Hypocrite Shaheen isn't all concerned about them or their lack of a seat at the table.  But let someone propose removing troops from Iraq and you can be sure she will suddenly feign concern for the women of Iraq the way she suddenly did Tuesday for the women of Afghanistan.

It's a funny kind of 'concern' for Shaheen -- one that slips in and out of conscious.  She apparently stumbles through the halls of Congress in some form of fugue state muttering "Must help women but . . . cannot . . . find . . . them" to herself. 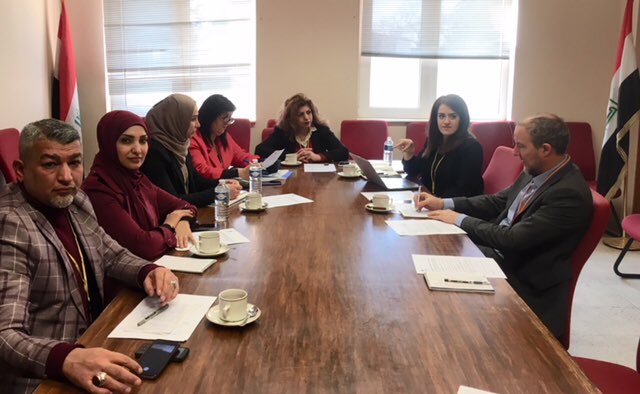 
That's the UK.  The US is doing nothing and that's apparently a-okay with Shaheen.

Her lack of concern for Iraqi women comes as Louise Callaghan (TIMES OF LONDON) reports that men are blackmailing Iraqi women if they find photos of them on social media without veils.  At the end of January, Sangar Ali (KURDISTAN 24) was also reporting on another use of social media to blackmail Iraqi women:

Police in the autonomous Kurdistan Region’s capital on Wednesday announced the arrest of four people responsible for blackmailing women on social media.
“After the Director-General of Erbil Police made an appearance on Kurdistan 24’s Darun u Diyarda program and said they would arrest those who threaten women by publishing their photos or videos, many people contacted us complaining about some unknown internet users,” Hogir Aziz, the spokesperson of Erbil Police, told Kurdistan 24.
When the police received complaints, they arrested four people in less than three days, he noted.
“The detained were using different fake accounts on social media networks to talk to girls and women,” Aziz added.

“First, they convince the women they are looking for a relationship. Then, they blackmail the women by threatening to show their messages or nude photos to family members if they do not send more photos, videos, or money.”


The current prime minister has a Cabinet that includes no women currently.  He did nominate one woman, finally, but she withdrew when it was learned her brother was a member of ISIS.  22 positions and he can't find a single qualified woman?  No, there are qualified women in Iraq, there is just no effort on the part of the rulers the US installs -- no effort to appoint women.

Workshops in #RCDForum: Legal Reform in Iraq, Anti-Domestic Violence Law and Shelter Gender-based violence against #women remains an ongoing concern in Iraq, recent conflicts have left women more vulnerable. #Iraq has yet to enact a law that ensures the protection of women.


Women suffer in all walks of life in Iraq. 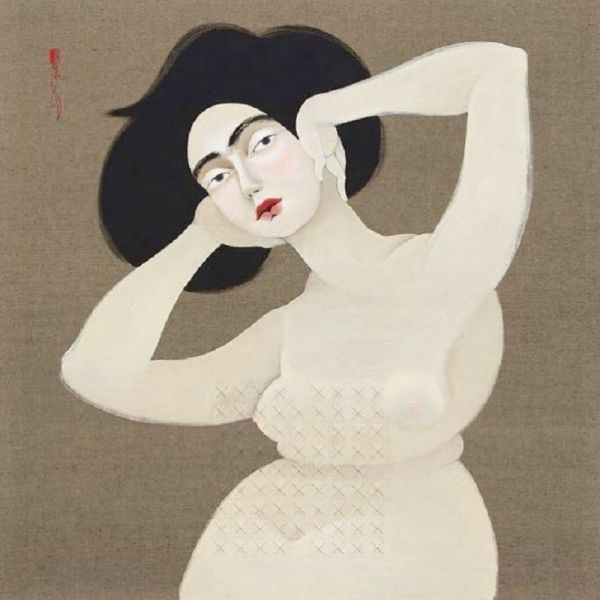 ARAB WEEKLY reports on a new exhibit at the Iraqi Plastic Artists Society:

“Only 17 women artists featured in the show. Their participation was very low compared to last year’s,” said society President Qasim Sabti. “This is not due to the lack of Iraqi women’s artistic capacities or talents but because many are not ready to take part in such a major event, in addition to the limitations placed on participation criteria that include age and experience.”
Sabti, a celebrated painter who has been a pillar of Iraq’s art scene for decades, said that there are many women artists who are preparing to burst on the scene “like a tsunami.”

“We have many young and talented female artists, much more than in the past. Some have already been able to carve a niche for themselves on the arts scene, surpassing well-known artists and this is a great achievement for Iraqi culture,” he said.
[. . .]
Painter Yusra Alabadi, who was among the few female artists featured in the show, said obstacles before the art scene in Iraq were immense, even though the Iraqi Plastic Arts Society and the Academy of Fine Arts boast thousands of members and students nationwide.

“Women’s contributions have dwindled on the cultural arena because they have lost the feeling of belonging as well as creativity. Some 50% of those who claim to be artistic are trying to imitate others and they eventually slip into repetition and redundancy, which is neither appreciated nor sustainable,” Alabadi said.


It should be remembered that the US government has a long history of destroying the lives of Iraqi women:

Attacked, harassed, Iraqi women rise every day and try to live and flourish -- with no help at all from the US government.


The Women's Advisory Group (WAG) on Reconciliation and Politics, which was established in October 2018 with the support of the United Nations Assistance Mission for Iraq (UNAMI), was officially inaugurated today in Baghdad.
The Group is expected to lobby for the advancement of women's role in politics and making their voices heard. Women continue to be underrepresented and remain excluded from political and decision-making processes in Iraq despite their active role in society. The Group comprises 22 members who have been selected in their individual capacities for their skills and experience. They include human rights defenders, media experts, former politicians and civil society activists, and represent a variety of interests, political backgrounds and regions.
In her remarks, Special Representative of the United Nations Secretary-General for Iraq (SRSG) Ms. Jeanine Hennis-Plasschaert urged the Government to recognise that broad societal representation in shaping the future of Iraq is necessary to ensure sustainable peace, security and prosperity for all of Iraq's citizens.
"At present, the inclusion of women and their direct participation in senior decision-making positions remains very limited. We are yet to see women being elected to some of the leading positions; for example, Governors or Chairs of Provincial Councils and let's not forget a male-dominated Cabinet," stressed SRSG Hennis-Plasschaert.
She urged Iraq's senior political leadership, including the government, parliamentary committees, civil society partners and other stakeholders to join UNAMI in drawing on the expertise of the Women's Advisory Group.
She further called on men interested in becoming male champions in the fight for gender equality to work closely with UNAMI and the Women's Advisory Group to design the necessary frameworks for women's inclusion in decision-making structures.
Speaking on behalf of the Women's Advisory Group, Bushra Alubaidi, a lawyer and human rights activists, highlighted that "participation of women in reconciliation and decision-making in state institutions remains limited in Iraq, despite the fact that the country has adopted national and international frameworks empowering women and ensuring women's meaningful role in society and the state. The current Council of Ministers is constituted of men only, and it is a rare practice that governmental entities would consult women's groups on policy decisions and frameworks," said Ms. Alubaidi.
Participants included the Second Deputy Speaker of the Council of Representatives, Mr. Bashir Haddad, the Prime Minister's Advisor on Reconciliation, Mohammed Salman, the Director-General of the Women's Empowerment Directorate at the Council of Ministers, Dr. Ibtisam Aziz, the head of the Sunni Endowment, Dr. Abdulateef Al-Humeim, Parliamentarians and Members of Provincial Councils, government officials, members of the Judiciary, members of the diplomatic community, as well as civil society activists and academics.
For more information, please contact: Mr. Khalid Dahab, Deputy Director of Public Information/Deputy Spokesperson, United Nations Assistance Mission for Iraq,

In other news, ALSUMARIA reports a civilian was shot dead in southeast Baghdad while Margaret Griffis (ANTIWAR.COM) notes ten more deaths while the call for US troops to leave Iraq only grows louder.

The head of Pro-Iranian parliament block and Bader Militia in Iraq Hadi Al Amiri said today that U.S Troops are cowards and they can do nothing in Iraq and he will kick them out. .@realDonaldTrump.@POTUS.@mike_pence.@AmbJohnBolton.@SecPompeo .@iran_policy .@Nussaibah 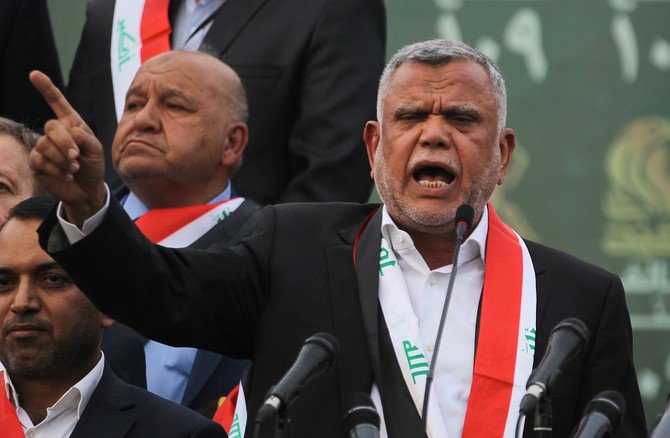 This as KURDISTAN 24 reports, "Speaking to Kurdistan 24 in Washington DC, where he attended a Ministerial Conference of the Defeat-ISIS coalition, Iraqi Foreign Minister, Mohammed al-Hakim, affirmed that US forces were in Iraq 'according to an agreement and request from the previous Iraqi Prime Minister and the current Prime Minister'."