U.S. Army Sgt. Christopher Wesley Curry is home for Memorial Day weekend.
Preceded by a state and local law enforcement escort and followed by hundreds of motorcycles, Curry and the miles-long procession wound through Terre Haute just after 1 p.m. Saturday.
Curry, 23, of Terre Haute, died May 4 in Erbil, Iraq, in a non-combat incident and is returning home for interment.

In spite of the pop-up thunderstorms rolling through Saturday, well-wishers lined parts of Third Street and Wabash Avenue as the procession made its way from Interstate 70 to Callahan and Hughes Funeral Home on South 25th Street.


An e-mail this week wondered "why are you so hard on poor Medea Benjamin?"  Why am I so tough on I Need Attention Benjamin?  Hmm.  She raised money off the Iraq War.  She rode to what passed for fame on the Iraq War.

The Iraqi people are denied self-representation -- most infamously by Joe Biden in 2010 -- but that's apparently not a concern.  They've had a series of 'governments' installed by the US since 2003 and none have served the Iraqi people.  The governments have victimized the people or looked the other way.  But self-proclaimed 'peace' 'activist' Medea can't be bothered.

Christopher was very funny, sweet, stubborn, and very much loved. He touched the heart of everyone he came in contact with. He will be greatly missed by his parents, Michael and Aimee Curry of Indianapolis; his brother, Alecandre Curry of Grafenwoehr, Germany; his younger brother and sister-in-law, Dakata and Shyla Curry of Fort Bragg, North Carolina; and his sister, Caitlyn Curry of Muncie, IN; as well as his friends and family.
Private memorial services will be held on Tuesday, May 26, 2020 in Callahan & Hughes Funeral Home, 605 South 25th Street. Visitation will be from 4:00 - 8:00 p.m. on Monday, May 25, 2020, following Indiana guidelines for numbers and social distancing. In lieu of flowers the family requests a donation be made to Mission22.com, a veteran support agency.


Medea has time for everything but Iraq.  I have no respect for what used to be called "hitchhikers on the highway of protests."  These are people who dabble.  They pretend to care but they're forever proclaiming they are dedicated to this or that cause one moment and then abandoning it the next.

You may remember the Iraq protests.  They started September 30th though some pretended that they started the first of October.  They went along for months with no help from Medea or her kind.  Then, suddenly, in January, they were concerned about Iraq.  Well, they were concerned that an Iranian terrorist was killed in Iraq.  They didn't give a damn about the protesters.

They could rally for their nonsense of stop-the-war-on-Iran-that's-coming-tomorrow-we-just-know-it!!!!!  They could show up for that.

How proud they must be to have been so wrong.


If you're not getting how wrong they were, this is from UNAMI:


A United Nations report published today on the abduction of protesters in Iraq since last October details their ordeals from the time of abduction through interrogation to acts of torture.

In its fourth report on the protests, the UN Human Rights Office of the UN Assistance Mission for Iraq (UNAMI) documented cases involving 123 people who disappeared between 1 October 2019 and 21 March 2020. Of these, 98 people were located, but 25 remain missing or are in an unknown status.
Since the protests erupted at the start of October, the UN has verified 490 deaths of activists and 7,783 injured. Most of the protesters are young and unemployed, and have been demanding that their economic and social rights be respected. The demonstrations have continued even after the outbreak of COVID-19 in the country.
The report found that the “absence of accountability for these acts continues to contribute to the pervasive environment of impunity in relation to demonstration-linked reports of violations and abuses”.
“The establishment of a high-level fact-finding committee by the new Government to investigate casualties and related harm is a crucial step toward justice and accountability,” said Jeanine Hennis-Plasschaert, Special Representative of the United Nations Secretary-General for Iraq. “The Government’s commitment to provide medical treatment for injured demonstrators and compensation to the families of victims is encouraging.”
The report notes that the abductions and disappearances occurred amid numerous incidents involving additional violations and abuses targeting activists and protesters, including deliberate killings, shooting and knife attacks, threats and intimidation, and excessive and unlawful use of force at demonstration sites.
None of those interviewed knew the identity of those responsible for their abduction, although most speculated the involvement of ‘militia’. They added that they did not believe official Iraqi Security Forces were directly responsible, nor that ordinary criminal gangs were to blame.
The report does not speculate on who might be behind the abductions, points to “the involvement of armed actors with substantial levels of organisation and access to resources”.
The report provides concrete recommendations to the Government of Iraq, including:
• Make immediate efforts to comply with its obligations under international law, including by making all efforts to locate those demonstrators and activists who remain missing.
• Take immediate action to protect protesters and activists from abduction.
• Take immediate action to investigate all alleged cases of abduction, disappearance and torture/ill-treatment, and to prosecute those responsible.
• Publicly identify the so-called unidentified force, armed group or ‘militia’, behind the abductions.
ENDS
The report in English and Arabic:
English: https://bit.ly/2A7oe75
Arabic: https://bit.ly/3ecuHwk


Why do I not believe Medea?  Because she has no follow through.  She makes a big (Code)Stink at first and then moves on and forgets.  She is exactly why the US government gets away with War Crimes.  She can't stay focused.  She can't stick to a cause.

Over 200 strikes and job actions in US during pandemic so far: WSWS Labor Editor Jerry White

Some Tweets from Anthony Zenkus


The damage has been done by those of you who engaged in rape culture, holding a victim to a different standard than the person she accused, and dragging her life through the mud. The damage to the #MeToo

movent will be with us for a long time.
Quote Tweet
@michelleinbklyn
· May 22
The people who pushed this story out without vetting it have done so much damage twitter.com/scottwongDC/st…


People who haven't lived the life you would have preferred they lived can still be raped. In fact, they often are.


While questions about Tara Reade's accounting of whether she rec'd a BA from Antioch swirl, it's important to note that Biden admitting to lying about his college record and number of degrees. Holding a victim to a different standard than the accused is rape culture.
Full screen
2.4K views
0:55 / 0:56


Calling out a woman who accuses a powerful man of rape as a liar and ignoring the alleged perpetrator's documented history of lying is an example of rape culture double standard. Biden literally lied on
@breakfastclubam
yesterday when he said he was endorses by the NAACP.

A Therapist’s Perspective On Rape, Trauma, Tara Reade, and Credibility - New Politics
A psychotherapist and expert witness in the field of rape and sexual abuse responds to Michael Stern’s doubts about Reade.

Now that the media seems finished with deconstructing the life of a woman who accused Joe Biden of rape and sexual harassment, I assume they have some free time to deconstruct the legacy of lies that Biden has left behind throughout his career.

Joe Biden Says NAACP Always Endorsed Him, But NAACP ‘Does Not Endorse’
In an interview, Joe Biden said the NAACP endorsed all his campaigns. The NAACP confirmed with Heavy that

“I should not have been so cavalier. I've never, never, ever taken the African American community for granted."-Biden "I don't want my kids to grow up in a racial jungle'. -also Biden #JoeBidenIsARacist 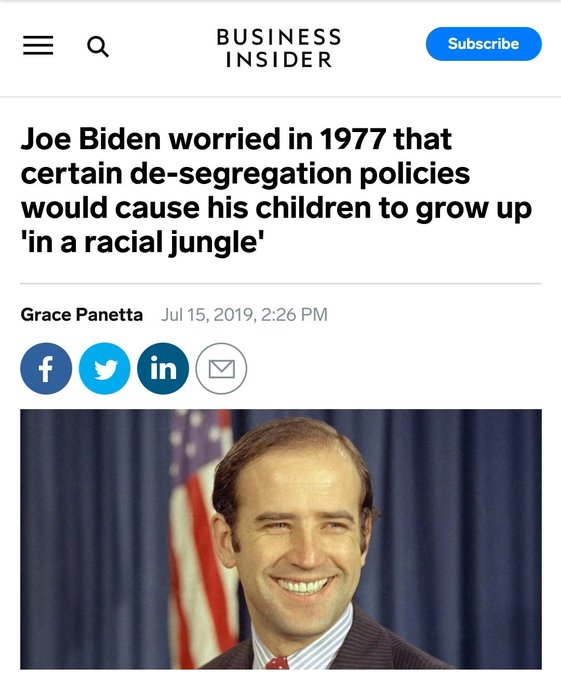 “I should not have been so cavalier. I've never, never, ever taken the African American community for granted."-Biden "I marched for civil rights" (lie) "I got arrested visiting Mandela in South Africa" (lie) Welp, okay then. #JoeBidenIsARacist


I sat down with
@skylerforsenate
this week who's running for NY Senate to talk about criminal justice reform, trauma and racism. Good discussion on what we need to do to make our communities stronger and fix our broken justice system.

You want victims to have lived perfect lives. You want them to be uncomplicated. That is not how it works. Rape and sexual assault happen far too often. Predators are rarely held accountable. Turning a person's life upside down to find something to dispute doesn't change that.