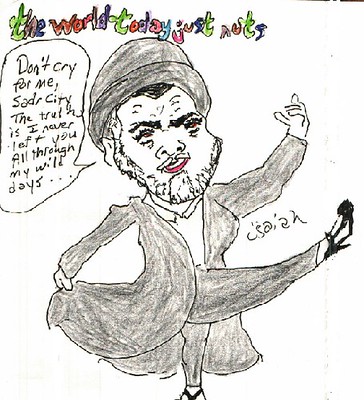 October 10th, nearly a year ago, Iraq held elections.  Yet they have still not named a president or prime minister.  All these months later, the political stalemate continues. RUDAW reports:

Iraq’s political climate is currently experiencing its most difficult period since the US invasion of the country around a decade ago, Prime Minister Mustafa al-Kadhimi said Saturday while expressing hope that  stability in the country emerges victoriously.

“Iraq is going through a political crisis that may be the most difficult crisis after 2003,” Kadhimi said during the Shiite Arbaeen pilgrimage, adding that solutions must be found to overcome the crisis and “move towards a secure and stable Iraq.”

Millions of Shiite followers from around the world embark on a journey annually towards Iraq’s holy Shiite city of Karbala to attend the Arbaeen pilgrimage, a Shiite ritual marking the end of a 40-day mourning period for the death of Imam Hussein, the grandson of the Prophet Mohammed, in 680 AD.

“My call to all political forces in Iraq is to let us take inspiration from this Arbaeen ceremony and to put Iraq and all the Iraqis in mind,” the Iraqi premier continued.

The political instability in Iraq has reached staggering depths with the country entrenched in deep political turmoil as different factions in Baghdad have been unsuccessful in reaching an agreement to form a government, almost a year after early elections in October 2021.

So what's on the agenda now?

There are calls for 'snap' elections.  Even though it's thought that were it decided tomorrow to hold elections, the process could take four to six months -- printing ballots, et al.

Idiot and cult leader Moqtada al-Sadr wants snap elections.  He also wants Parliament dissolved -- the current Parliament immediately.  Does he not grasp that an election law has been required prior to each election?  So, for 'immediate' elections, Parliament would need to reconvene at least long enough to pass an election law.

The Judiciary has made clear that the Constitution must be followed and that it cannot dissolve the Parliament because only the Parliament has that power.

He's also an idiot because he seems to think he'll do better in a new election.  No.  He's antagonized countless Shi'ites.  He's made himself look worse than the militias -- which is only one of the Shi'ite rivals he has -- only one.  He commanded his cult to turn out.  While they did (to a degree) most Iraqis sat out the election outside of the KRG -- in fact, most Shi'ites sat out the election.  Voter turnout is officially at 41% -- 'officially' because, anticipating a low turnout, prior to the election -- sensing a low turnout, the government reconfigured how they'd count the turnout and eligible voters.

Moqtada's stunts in the last month have angered many Shi'ites.  Arabic social media is filled with assertions from those who sat out the 2021 election that they will vote in a new election just to send a message to Moqtada.

The Shiite pro-Iran Coordination Framework carried out over three days last week negotiations with Sunni and Kurdish forces to form a new government in Iraq.

The Framework is keen on forming the new cabinet as its rival, cleric Moqtada al-Sadr, head of the Sadrist movement has yet to comment on the efforts.

The Framework held talks with the Sunni Azm and Sovereignty alliances and the Kurdish Democratic Party and Patriotic Union of Kurdistan.

Leaks to the media confirmed speculation that the Sunnis and Kurds have set a number of conditions to join the Framework in the new government.

It remains to be seen whether the Sadrists and Framework will meet after the Arbaeen commemoration on Saturday.

An informed source told Asharq Al-Awsat that the negotiations between the Framework, Sunni and Kurdish forces are not official, rather the latter two parties are “testing the waters” with the former to see whether it would achieve repeated demands that have been ignored for years.

The source said the negotiations are significant because they go to show how far Sadr’s former allies – the Sunnis and Kurds – have grown distant from his movement.

Gharib al-Muradli, another Coordination Framework MP, told Rudaw that a total of 183 MPs have signed the petition, which also includes Kurds, Sunnis, and Turkmen.

Iraq continues to be shrouded in uncertainty and political instability triggered by the current parliament’s failure to form the country’s next government due to political disagreements, almost a year after the early elections in October.

Under Iraq’s constitution, the dissolution of the parliament can only be done through an absolute majority of its members, or upon the request of one-third of its members.

While the government struggles to form, Iraq faces many, many problems.  Such as climate change.  AFP reports:

To feed and cool his buffaloes, Hashem Gassed must cross 10 kilometers of sunburnt land in southern Iraq, where drought is devastating swathes of the mythical Mesopotamian Marshes.

The reputed home of the biblical Garden of Eden, Iraq’s swamplands have been battered by three years of drought and low rainfall, as well as reduced water flows along rivers and tributaries originating in neighboring Turkey and Iran.

Vast expanses of the once lush Huwaizah Marshes, straddling the border with Iran, have been baked dry, their vegetation yellowing. Stretches of the Chibayish Marshes, which are popular with tourists, are suffering the same fate.

“The marshes are our livelihood — we used to fish here and our livestock could graze and drink,” said Gassed, 35, from a hamlet near Huwaizah.

Southern Iraq’s marshlands were inscribed as a UNESCO World Heritage site in 2016, both for their biodiversity and their ancient history.

But now, beds of dry streams snake around the once verdant wetlands, and the area’s Um al-Naaj lake has been reduced to puddles of muddy water among largely dry ground.

“The political crisis is adding a layer of complexity to the climate crisis in the country,” said Zeinab Shuker, an Iraqi sociology professor at Sam Houston State University in the US state of Texas.

“The worst-case scenario is what is happening right now,” added Shuker, who writes about the political economy of Iraq.

Iraq is embroiled in a political quagmire that has left it without a functioning government for almost a year, the worst deadlock the country has experienced since 2003.

Parliament has failed to agree on a new president or prime minister since an election last October, in a power struggle among rival factions that spilled over into deadly street clashes earlier this month.

Meanwhile, citizens are facing an increasingly tough struggle with the impacts of a heating planet.

The temperatures in Iraq’s capital Baghdad rose by 1.7 degrees Celsius between 1960 and 2021, according to Berkeley Earth, a U.S.-based environmental data science nonprofit. During summer, temperatures often reach up to 50C (122 Fahrenheit).

Iraq is the fifth most vulnerable country to the impacts of climate change in the world, according to a report this year by the International Organization for Migration (IOM).

Stan's "DO REVENGE, Flabby Viola, Sally Field and THE FLYING NUN" and Mike's "Russell Brand, Chris Hedges" posted earlier as did the following:

You Made It Weird | Kevin Smith

They Can't Cover This Up!

US Helps Ukraine Refugees While Afghans Get Abandoned