Another US service member dies in the Iraq War

PRINT | E-MAIL
April 29, 2017Release # 20170429-02FOR IMMEDIATE RELEASE:SOUTHWEST ASIA — A U.S. service member died from wounds sustained in an explosive device blast outside of Mosul, Iraq, Apr. 29, 2017. Further information will be released as appropriate.


Thomas Gibbons-Neff (WASHINGTON POST) observes, "Saturday’s death, if caused by hostile fire, would be the fifth U.S. combat death in Iraq since the start of the campaign against the Islamic State there in 2014, and the first during the Trump administration. In October, Navy Chief Petty Officer Jason C. Finan was killed by a roadside bomb on the outskirts of Mosul just days after the battle to retake the city began."


Thousands of US troops have been sent into Iraq since the summer of 2014.

Special-Ops, of course, remained in Iraq even after the 2011 drawdown.  And Barack Obama added a unit of Special-Ops to that total in the fall of 2012.


AP notes, "The Pentagon has acknowledged more than 100 U.S. special operations forces are operating with Iraqi units, with hundreds more playing a support role in staging bases farther from the front lines." 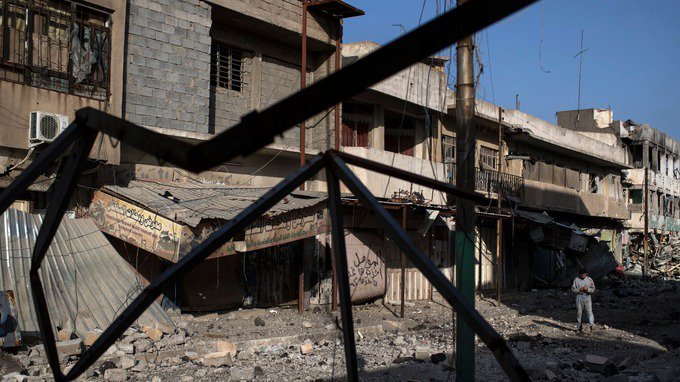 Is there any end in sight?

No end to the Iraq War.


Neil Clark (RT) notes what this never-ending war has 'accomplished':


Since then over 1 million Iraqis have lost their lives. Over 4,800 soldiers from the US and its allies have also died, including 179 from Britain.
In 2007, it was reported that between 12 and 20 percent of returning Iraq War veterans suffer from Post-Traumatic Stress Disorder.
As its opponents predicted, the war caused a refugee crisis of epic proportions. In 2007, the UN said that the number fleeing Iraq had reached 2 million, while there were an estimated 1.7 million internally displaced people. By the end of 2015, the UN said the number of displaced Iraqis had reached 4.6 million. Among the many Iraqis who were forced from their homes, were the country’s Christians, who have faced terrible persecution.
In 2016, it was reported that 80 percent of Iraq’s 1.5 million-strong Christian community had fled since 2003.
Fourteen years on, the US military is still in Iraq – now seeking to “liberate” Mosul from Islamic State terrorists (IS, formerly ISIS/ISIL), who would not have existed without the previous “liberation” of the country. Even Tony Blair, one of the architects of the war, has partially acknowledged that, without the Iraq War, there’d be no Islamic State.
The plight of young women and gay people in Iraq has gotten worse. In 2011, a HRW report said that young women were “widowed, trafficked, forced into early marriages, beaten at home, and sexually harassed if they leave the house.” Child marriage has risen since 2003, with 25 percent of women being married off before their 18th birthday.
In a 2009 Guardian article, Peter Tatchell who had supported arming Iraqi opposition groups to topple Saddam, noted how “Since the fall of Saddam Hussein, homophobia and the terrorisation of LGBT people has got much worse… The western invasion ended the tyrannical Baathist dictatorship. But it also destroyed a secular state, created chaos and lawlessness… The result has been an Islamist-inspired homophobic terror campaign against LGBT Iraqis.”


Remember when people used to think the Iraq War could end?

Remember how Barack Obama was elected on the promise that he would end the Iraq War?

US President Barack Obama visits Baghdad, IraqBarack Obama made has made his first trip to Iraq as President, flying into Baghdad International Airport from Istanbul for a short visit shrouded in secrecy.


The caption to the photo?  This:

Cheered wildly by US troops, President Barack Obama flew unannounced into Iraq and promptly declared it was time for Iraqis to "take responsibility for their country" after America's commitment of six years and thousands of lives.


Barack was so full of it.

OAKLAND'S FRIDAY FARMER'S MARKET AND ITS VEGETABLE VOCABULARY OF LOVE

Photojournalist David Bacon has had many exhibits and written many books, his latest book is The Right to Stay Home: How US Policy Drives Mexican Migration.   He has an important new photo essay that we'll note the opening of. 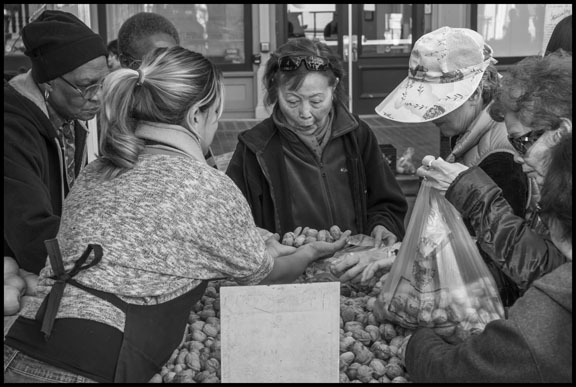 A Mexican farmer from Kingsburg, in the San Joaquin Valley, bargains with Chinese mothers over the price of walnuts.I do the cooking in my house. To me, it's a way I show my love for the people in my life. I know I'm not the only person like that. When I read Amy Tan's novel, The Joy Luck Club, the sections when the mothers tell their daughters about the importance of the best quality food resonated with me.At the Friday farmers' market in Oakland, California, I can see those mothers in front of the stalls, bargaining over the produce. Oakland is a working-class city across the bay from San Francisco, and like many California cities, it has an historic Chinese and Asian American community-a Chinatown. Being right next to Chinatown makes the Oakland farmers' market unique.If you go up to the farmers' markets in Berkeley (next door to Oakland) or over to San Francisco, these days you'll find a booth or two with Asian vegetables. Asian cooking is healthy and popular. But because Berkeley and San Francisco are much more affluent communities, stalls at farmers' markets often target more middle-class and even upper-middle-class shoppers.At the Oakland market the Asian stalls are the majority. If you come early, you can see the moms of Chinatown around the stall that has the best baby bok choy or lemongrass.

You can dislike Trump and Hillary Clinton too (Margaret Kimberley)