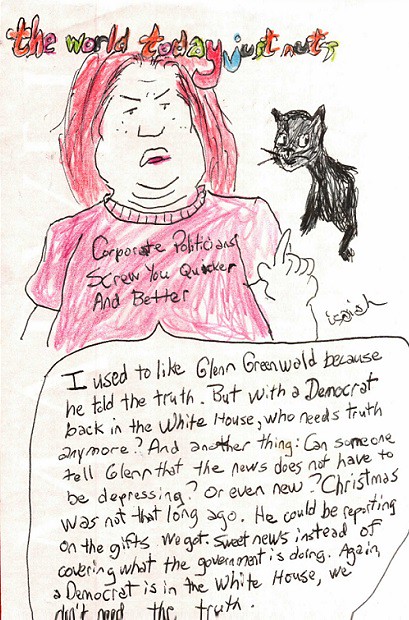 Isaiah's latest THE WORLD TODAY JUST NUTS "The Glenn Greenwald Reaction."  Airhead Donna pops up again spouting her 'wisdom,'  "I used to like Glenn Greenwald because he told the truth.  But with a Democrat back in the White House, who needs truth anymore?  And another thing: Can someone tell Glenn that the news does not have to be depressing?  Or even new?  Christmas was not that long ago.  He could be reporting on gifts we got.  Sweet news instead of covering what the government is doing.  Again, a Democrat is in the White House, we don't need the truth."  Donna's t-shirt reads "Corporate Politicians Screw You Quicker And Better."  Isaiah archives his comics at THE WORLD TODAY JUST NUTS.

Moqtada and Nouri try to slither back to power

In Iraq, Mustafa al-Kahdimi is a daily disappointment.  That didn't change on Saturday as he trended on social media.  MIDDLE EAST MONITOR reports:

Iraqi Prime Minister Mustafa Al-Kadhimi has sparked controversy on social media platforms after he appeared in photos painting the Iraqi flag upside down on kids' faces at an Iftar feast organised for orphans in the Green Zone Palace, Baghdad.

Al-Kadhimi appeared in photos playing with children in the garden of the government palace. Social media users shared photos and videos of the prime minister painting the Iraqi flag upside down, launching a wave of criticism on social media platforms.

Iraqi Twitter activist Hamad Al-Maliki published a picture of Al-Kadhimi and captioned it: "The flag of the country has different colours; red is above and black is below. Thank you for your love for the children of your country whose flag you do not know how to paint. I pray sincerely that this picture is photoshopped, otherwise this is a scandal."

Another Twitter user Ali Al-Kadhimi posted: "A prime minister who does not know the order of colours of the flag of the country he rules."

Prime minister of Iraq didn't know how to paint Iraqi flag.... He started from bottom to top! What a prime Iraqi have!?

Mustafa was supposed to be the great hope for Iraq.  Before him it was Hayder al-Abadi that was the great hope.  There's always some US and Iran puppet that's going to be the one to deliver but like the press promoted forever 'turned corner,' nothing ever changes.

Slowly, people outside of Iraq are catching on to Mustafa's failures.  Heyrsh Abdulrahman (JERUSALEM POST) reports:

Iraq as a democracy has largely failed. The Iraq war was seen as a turning point that would usher in an era of freedom and opportunities. That thesis proved wrong. Iraq has since seen instability and chaos with little peace and calm to offer its citizens. It has suffered huge problems, like the emergence of ISIS, and came to a near-total collapse.
A major reason for all this is the failure of the political leaders to run the country effectively. Celebrated that it would turn into a functioning democracy, it has fared very poorly. The failure may be attributed to the dominant political factions currently having the political clout to run the country’s affairs. An even bigger quagmire is the support of consecutive US administrations for the Iraqi ruling elites.

The Biden administration now has a choice to make. It has a choice: Work with the leaders who have failed consistently in Iraq and the Kurdish region, KRI, or revise American policy.
For starters, the Biden administration should make clear that the US isn’t going to tolerate the actions of the current political establishments in Iraq, including the KRI. One way of sending this message is the application of the Magnitsky Act. Employing this act, the US can apply sanctions on foreign officials. The Biden administration should use this tool to sanction not only tiny political figures but also top political personalities. The US should strengthen the formal political institutions to the extent that they can bring influential figures to account for their actions, without suffering negative repercussions when doing so. Biden’s administration should work with these formal institutions to lessen and gradually end the influence of proxy militias.
The current Iraqi leaders have failed miserably. The dominant parties in the KRI have taken control of the region and have stifled every other opposition. It is the right time to make these leaders accountable, with American help. New leaders should be appointed who are dedicated to serving their people, not pursuing their interests or serving their patrons. They should be given the platform and whatever support Washington can give them. By showing its teeth to the current political elites, the US could give sincere leaders the space they need to emerge.
But it depends on the current administration’s willingness to act on this call to duty. If the Biden administration is willing to do it, it can do it. Iraq has been absent from Biden’s policy speeches. But it would be a grave mistake to forego the problems of Iraq. It is time that the US prioritized Iraq as a significant foreign policy challenge.

As Mustafa fumbles and tumbles, cleric Moqtada al-Sadr hopes to profit.  The one-time Shia leader continues to command his cult that has settled on living in slums and not making demands on their supposed leader.  But that's all he's had of late.  He was mocked and ridiculed by Shi'ites throughout 2020.  Despite that, he sees an opportunity.  Though the attempted assassination of Moqtada's representative Hazem al-Araji last week in Baghdad as "Armed men in two BMWs opened fire near Araji and hit a member of his personal bodyguard, which led to an exchange of fire between Araji’s bodyguards and the militants" might be seen as a message to Moqtada.  ARAB WEEKLY notes:

An Iraqi source familiar with the movement’s internal discussions said, “The time for propaganda against American occupation is gone after the Sadrist movement had a taste of power. It has benefited from the quota system through the appointment of cabinet members in various positions and subsequently gained a level of influence within Iraqi state institutions that is similar to that wielded by the Dawa Party.”

He added that, “The leader of the movement, Muqtada al-Sadr, realises that the options of the United States are limited. There is no way to deal with the PMF, which is almost completely under the thumb of the Iranian Quds Force, nor with the Dawa Party, whose fortunes are eroding and which stands accused by many of its followers of corruption, nor with the smaller Shia groups that enjoy more popularity in the media than among political activists. The Sadrist movement has become the ‘moderate tendency’ despite all that happened during the past few years.”

Despite the endeavours of Iraqi Prime Minister Mustafa Al-Kadhimi to co-opt a large segment of the Shia electorate within the civil state, the Sadrist movement is betting on its popularity among the poor in major popular neighbourhoods of Baghdad, in addition to segments of the population in the central Euphrates and southern Iraq regions that are dissatisfied with the government.

Always one desperate to hold on to power, former prime minister and forever thug Nouri al-Maliki is sniffing around Moqtada once again.  Sura Ali (RUDAW) reports:

Speaking to al-Shariqyah TV on Thursday, Maliki said that he is ready to reconcile with Sadr.

"My hand is open to everyone who wants to reconcile with me. I do not want rivalries, and I do not want disputes to continue, neither with Muqtada al-Sadr nor with anyone else," said the current leader of the State of Law coalition.

Sadr leads the Sairoon coalition, the largest bloc in the Iraqi parliament, which has recently began speaking explicitly about its desire to head the next government.

The Shiite cleric is Maliki’s most prominent opponent. Maliki also faces resistance from Iraq’s Shiite religious figures, led by Grand Ayatollah Ali al-Sistani, who supported his removal from power in 2014.

Meanwhile an attack is getting press attention -- so you know it's about oil and not about people.  REUTERS notes, "Militants using explosives attacked two oil wells northwest of Kirkuk in northern Iraq on Saturday but no significant damage resulted and production was not affected, the Iraqi oil ministry said." XINHAU reports, "The attacks took place at dawn in Bai Hassan oil field in the al-Dibis area northwest of the namesake provincial capital Kirkuk, some 250 km north of Iraq's capital Baghdad, causing minor casualties in the oil wells, a provincial police source told Xinhua."   MEMO explains, "Kirkuk province has the oilfields of Bai Hassan, Baba Gurgur, and Havana, which together produce more than 370,000 barrels/day."  ASHARQ AL-AWSAT notes, "An Iraqi security source said ISIS militants carried out the attacks at the Bay Hassan oil field in al-Dibis area, some 250 km north of Baghdad."

Today, the death count from COVID reached 3 million globally.  Around the world, the pandemic has devastated.  An Iraqi journalist who worked for the ASSOCIATED PRESS died on Friday.  Samya Kullab Tweets:

We at the AP Baghdad Bureau are heartbroken over the passing of our dear colleague Khodeir Majid, who died of complications from COVID-19 this morning. May he Rest In Peace.

Veteran AP producer, cameraman in Iraq dies of COVID-19
BEIRUT (AP) — Khodeir Majid, who covered Iraq’s numerous conflicts as a video producer and cameraman for the Associated Press over 17 years has died

Khodeir Majid, known as Abu Amjad to family and friends, was a beloved
@AP
colleague and a calming presence in the Baghdad bureau.

Veteran AP producer, cameraman in Iraq dies of COVID-19
BEIRUT (AP) — Khodeir Majid, who covered Iraq’s numerous conflicts as a video producer and cameraman for the Associated Press over 17 years has died

Majid joined the AP in Baghdad in March 2004, a year after the U.S.-led invasion that toppled Saddam Hussein in 2003. He went on to cover the breakdown in security and sectarian bloodbath that prevailed for years, as well as the U.S. occupation, the rise of the al-Qaida terror network, and finally, the war against the Islamic State group.

Killings, kidnappings and bombings were an everyday occurrence, sometimes with multiple bombings on the same day.

Through it all, Majid, known as Abu Amjad to family and friends, was a beloved colleague and a calming presence in the Baghdad bureau. He was a dedicated journalist and a good friend to many, working quietly and behind-the-scenes to make sure accreditation and paperwork were secured, badges were collected, interviews were nailed and stories were covered.

“Abu Amjad was a rare source of joy during difficult times working in Baghdad for the past 17 years. He will be remembered as kind and a dedicated professional,” said Ahmed Sami, the AP’s senior producer in Baghdad.

Samya Kullab, the AP’s correspondent in Baghdad, recalled Majid’s dedication and commitment toward getting evasive ministers and officials to grant the AP interviews. “He chased the Transport Ministry for months recently. ‘He keeps saying next week but don’t worry, I will not stop calling’ – such was his dedication to getting the story.”

Journalist Rania Khalek, former Bernie Sanders press secretary Briahna Joy Gray, comedian Kate Willett have a very serious discussion about "Golden Girls," which Rania calls "such a good show." How old were they? Why were they canceled? When were they canceled? Were they ahead of their time? The panel then tackles the racism of Disney movies, Fantasia and Aladin, in particular, and winds up discussing Sam Harris's mom. ***Please support The Katie Halper Show *** On Patreon https://www.patreon.com/thekatiehalpe...​ Follow Katie on Twitter: https://twitter.com/kthalps